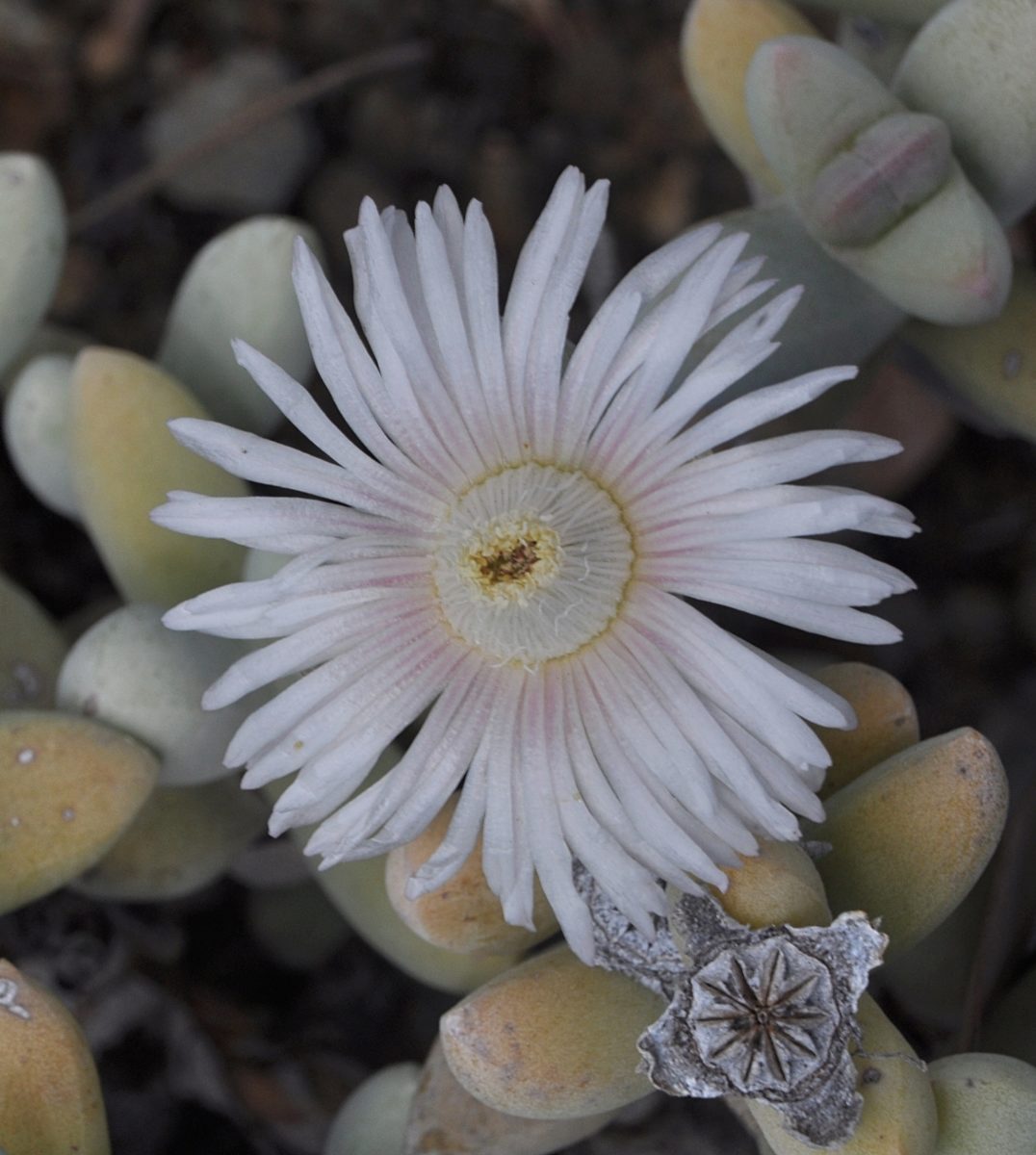 South Africa is home to many plants in the Ice Plant Family (Aizoaceae), and they are well-represented in the winter-rainfall area in the west of the country. A few of these are widely grown, but others are seldom seen in cultivation, as is the case with Wooleya farinosa. It is the sole species in its genus, and it occurs only in a small area in South Africa’s arid northwest, growing in the sandy coastal plain. Wooleya farinosa gets only 2 – 4 inches of annual winter rainfall in its native area (50 – 100 mm), but this is supplemented by fog, which provides an important source of supplemental moisture. Mature plants form small shrubs about 8 inches high (20 cm) and as much as 20 inches (.5 m) across.

Though the stems of Wooleya farinosa are slender, they are stiff and woody. The gray-green leaves emerge in pairs, fused at their bases where they clasp the stem, and protruding like stubby fingers on either side. On close inspection, it can be seen that there is an upper leaf surface which is slightly flattened, and a rounded lower surface. However, the marginal lines are subtle, and the overall impression is of short thumbs. At the tip, the leaf comes to a blunt point. In habitat, the leaves are ash-gray, but in cultivation they tend to be greener. The older leaves may become yellowish or tinged orange. Mature leaves are up to about 1½ inches long (3.8 cm) and ⅓ to ½ inch wide (.85 to 1.25 cm). Even after the leaves wither, they remain on the plant.

Wooleya farinosa flowers during the fall and winter months. At the Ruth Bancroft Garden in California, the first flowers appear in late September or early October. While some plants in the Ice Plant Family (Aizoaceae) flower all at once in a concentrated burst, W. farinosa has a more spread-out blooming habit, with a few flowers here and a few flowers there over the course of several months. Flowers at the bud stage are clasped by four fleshy sepals, but these are covered up by the petals once the flowers open. Like other plants in the family, the flowers have a ring of narrow petals surrounding a cone of stamens gathered around the pistil at the center. The flowers are white (sometimes with a faint blush of pink) and an inch in diameter (2.5 cm). When the flowers wilt, the sepals are once again visible, looking like four ears protruding from the developing seed capsules. The capsules, which are .35 inch to .43 inch in diameter (9 to 11 mm), are initially reddish, but they subsequently turn gray. They have domed tops, with 9 to 13 slits corresponding to the locules, or chambers holding the small brown seeds. As with many other mesembs (as plants in the Ice Plant Family are known), moisture causes the mature capsules to swell, and as they do so the locules open so that rain may splash out the seeds within. 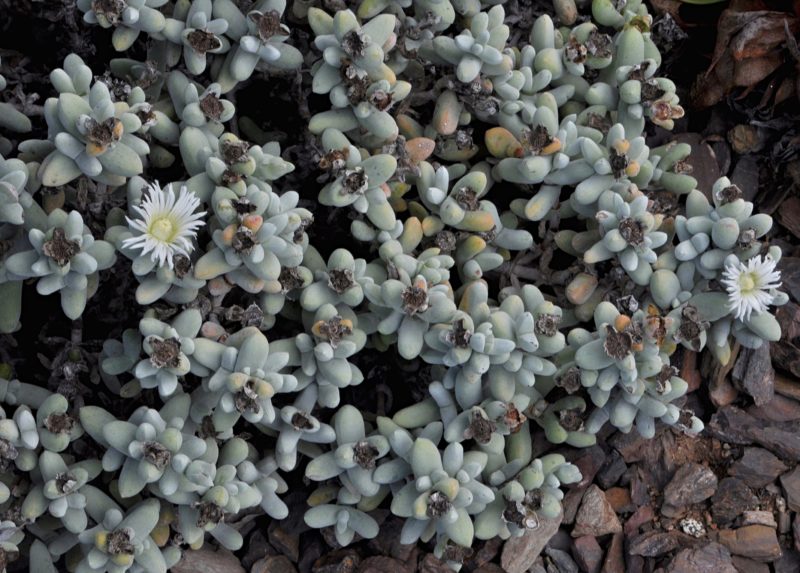 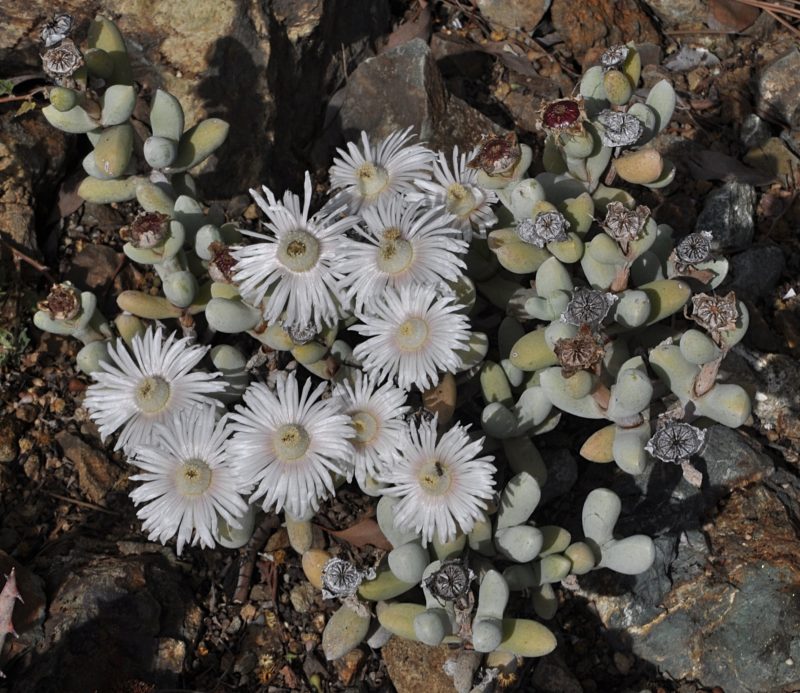 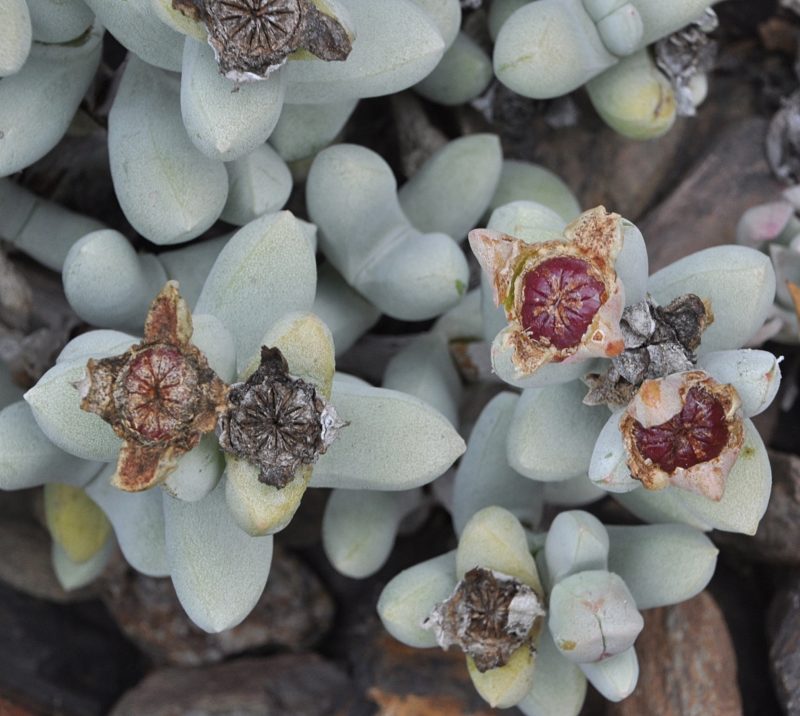 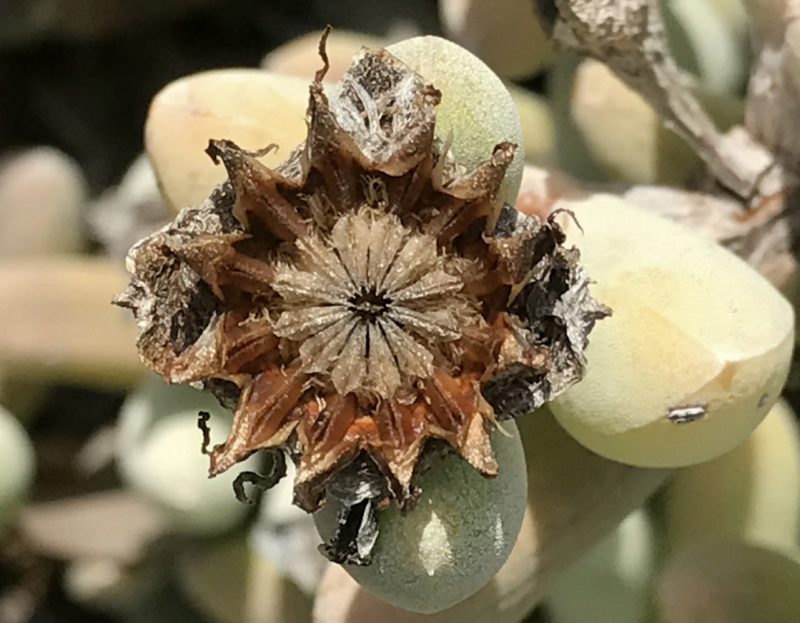