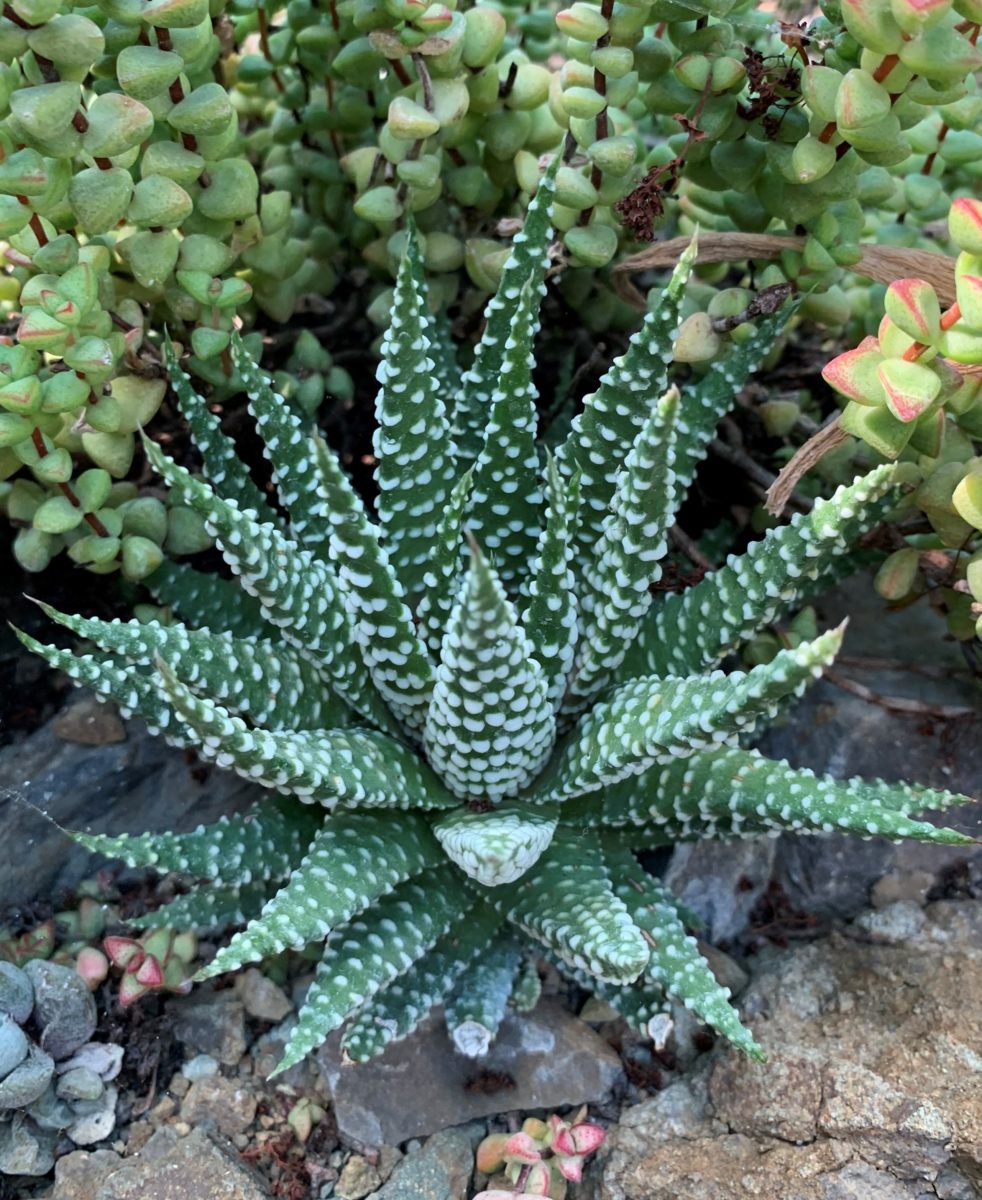 Collectors have long been drawn to the many fascinating dwarf succulents in the genus Haworthia, native to southern Africa. These plants first made their way into horticulture through the Dutch, who established a way-station at Cape Town in 1652 where ships could stop en route to the Dutch East Indies. For some time, Haworthia has been divided into 3 groups, or subgenera, and these have now been re-classified as three separate genera, instead of three groups within one genus. One of the new genera is Tulista, with only four species, all of them found in the southwestern part of South Africa.

Although a small genus in terms of the number of species it contains, Tulista features the largest individual plants to be found in the circle of Haworthia relatives. The biggest of all is Tulista pumila, which has several synonyms under its old placement in Haworthia: Haworthia margaritifera, Haworthia maxima, and Haworthia pumila. The epithet pumila (meaning small) may seem like an odd choice for a plant which is the largest in its group, but it derives from the old name Aloe pumila, from before the genus Haworthia was established, and for an Aloe it is indeed on the small side.

Tulista pumila occurs in the western part of the Little Karoo and westward to the area around Worcester, a little to the east of Cape Town. The rainfall here is mostly in winter, and this is the season when the plants are in active growth. In the northeastern part of the distribution range the rainfall is quite low and erratic, and in some years there is very little rain at all.

Though initially solitary, older plants of T. pumila may produce a few offsets to form a small clump. In shaded postions, plants may elongate slightly, but they are essentially stemless. The rosettes are up to 6 inches (15 cm) in diameter, and as much as 10 inches tall (25 cm). Each leaf is quite thick and rigid, up to .8 inch (2 cm) wide at the base and tapering to a pointed tip. A full-grown leaf is up to 5½ inches long (14 cm). The leaves are deep green in the shade, but may be brown-tinged or somewhat reddened in exposed positions. Both leaf surfaces are peppered with raised white tubercles, resembling the salt crystals on a pretzel. When the plants are in growth, the leaves spread widely, but in drought they pull together to reduce exposure and moisture loss.

Compared to the plants remaining in Haworthia, the species in Tulista have relatively stout flower stalks, and these usually have multiple branches. In Haworthia, the stalks are more thin and wiry, and most often there are no branches at all. For Tulista pumila, the whole inflorescence may be as much as 2 feet high (60 cm). Flowering takes place during the summer months. Plants are often growing among small shrubs, with the flowers held above the foliage and easily visited by pollinators.

As for the flowers themselves, those of Tulista pumila (as with Tulista in general) are stouter and less strongly two-lipped than those in Haworthia.  They are loosely spaced along the floral branches, and they average about a half-inch (13 mm) in length. Their color is difficult to pin down; often they are off-white tinged with green, but they may also have a purplish flush. At the bud stage, they may have salmon tips, and open flowers sometimes have a little yellow at the mouth. In any case, the overall effect is not colorful, and it is definitely the appearance of plants themselves, rather than their flowers, that accounts for their horticultural appeal. 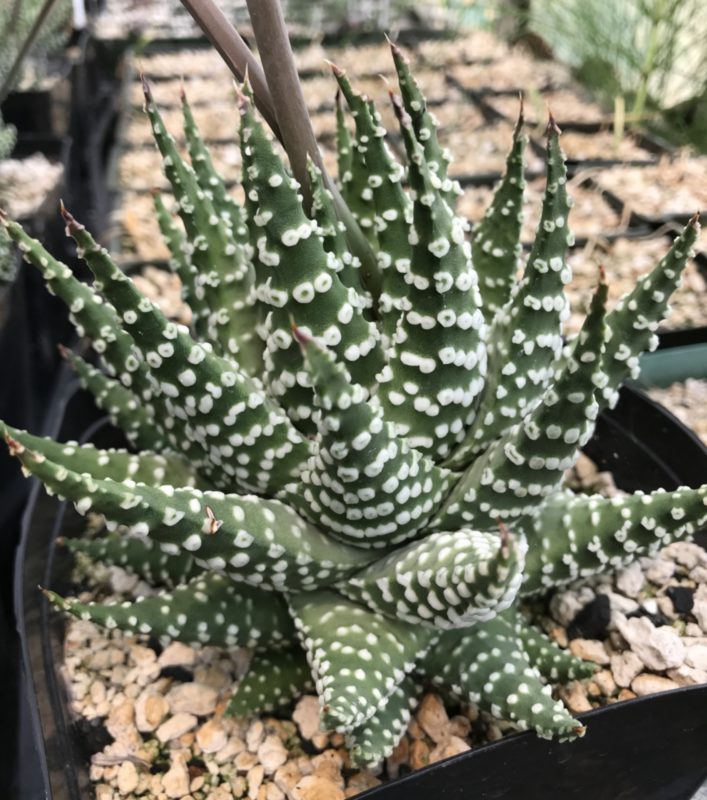 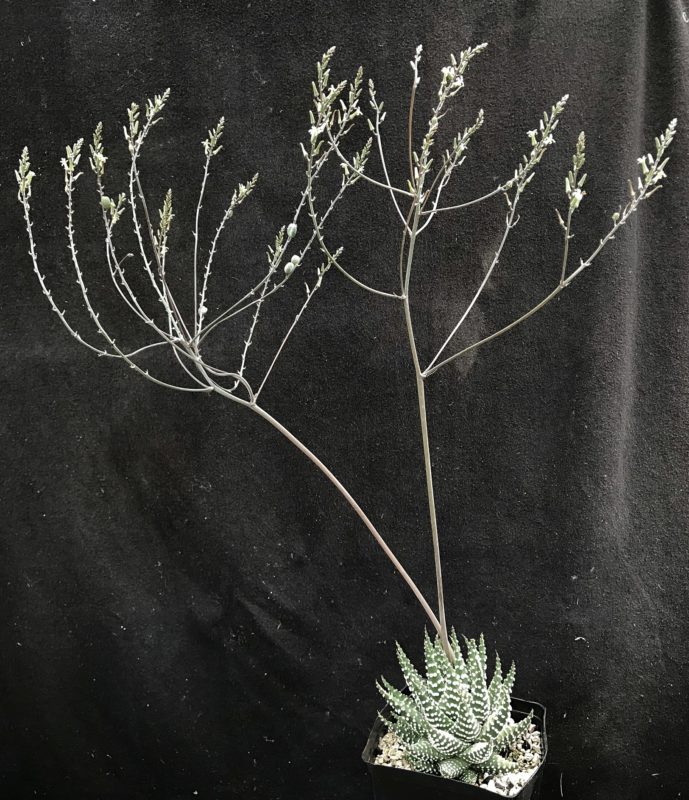 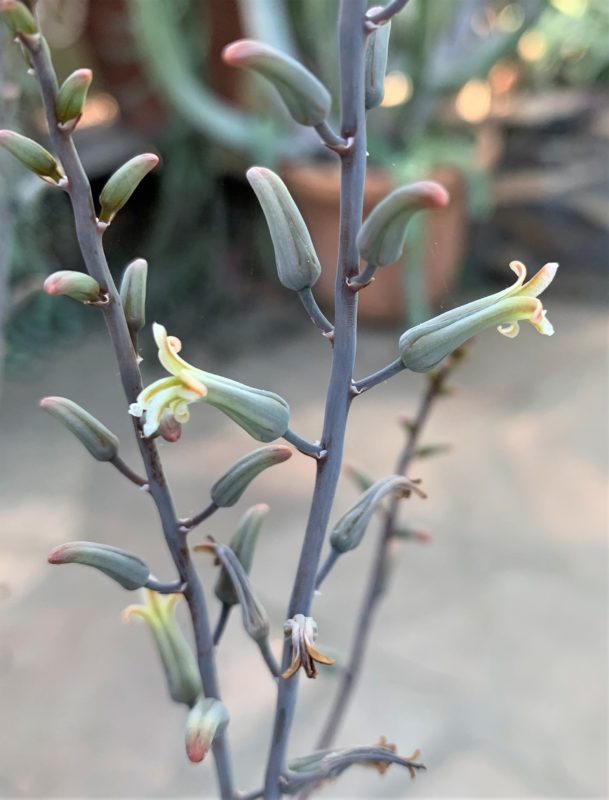 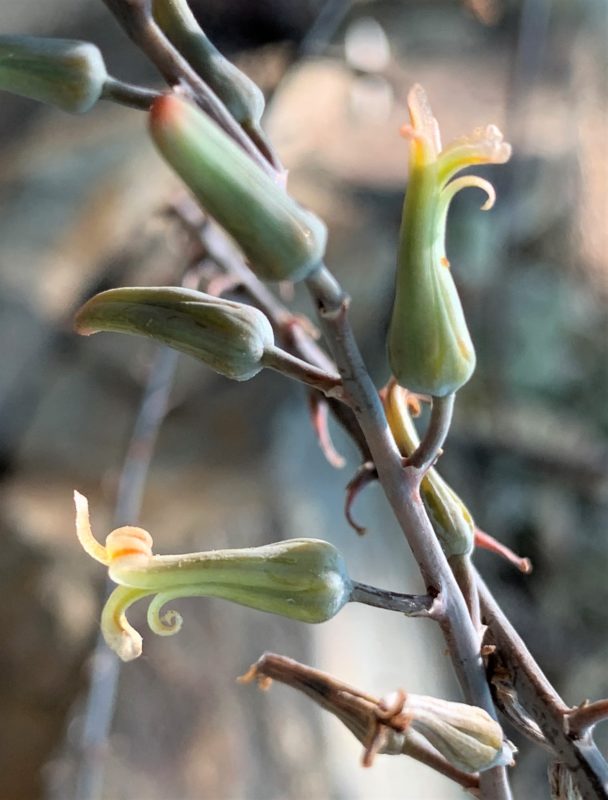