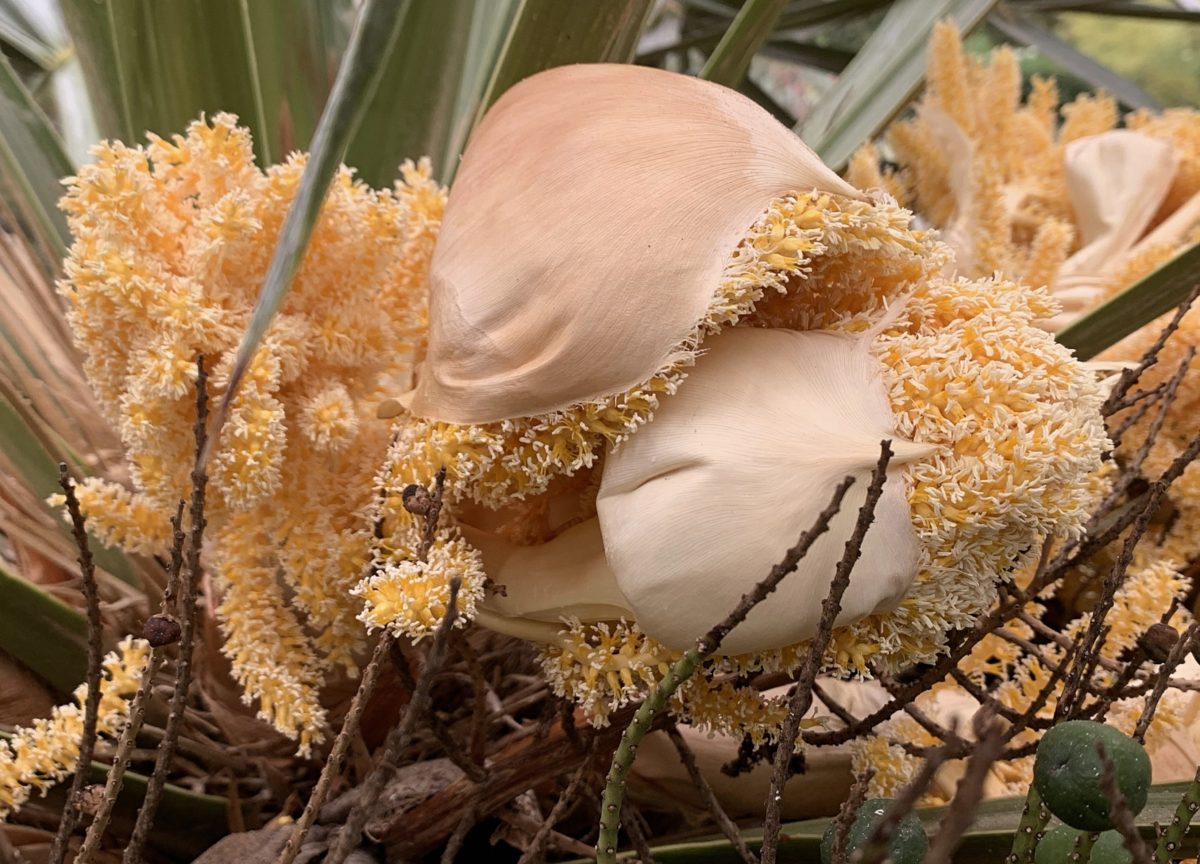 Trithrinax is a genus of 5 species of drought-tolerant South American palms. While some palms have pinnate leaves (with the leaflets all lined up on either side of the leaf-stalk, like a coconut palm), the species in Trithrinax have palmate leaves (with the leaflets radiating from the end of the leaf-stalk; such palms are referred to as fan palms). At the Ruth Bancroft Garden we grow one of these, Trithrinax campestris, native to northern Argentina and Uruguay. This species is known as the caranday palm, or alternatively as the blue needle palm, with the latter name referring to its sharp-tipped leaves.

Trithrinax campestris is compact and slow-growing, and it may be solitary or clumping. Plants from lower altitudes tend to have green leaves, while higher-growing ones are more silvery. We have two specimens at the garden, and one of these is solitary and green leaved, while the other is multi-trunked and has silvery-gray leaves. Both of these are fall-flowering, but the solitary one is a little earlier, generally flowering in September-October, while the clumping specimen flowers in October-November.

While T. campestris may reach a height of as much as 20 feet (6 m), it is often less than this, and our plants are about 10 feet tall (3 meters) after more than 40 years of growth. It is not uncommon for palms to be spiny, but different kinds achieve this in different ways. Some have spines along their petioles (the shaft of the leaf below the leaflets), and others have spines protruding from their trunks. While T. campestris does not possess either of these traits, it has sharp-tipped leaflets, and also spiny leaf-sheaths. The woven-looking leaf-sheaths around the leaf bases are a unique feature that sets Trithrinax apart from other genera of palms. The leaves themselves are on the short side, with a length of about 3 feet or so (1 m). The petioles are smooth and green, with a distinctly convex lower side and a flat to slightly concave upper side. The radiating leaflets are very stiff and fibrous, with a trough running down the upper side and a keel on the underside. Each leaflet splits into two at the tip, with the points being surprisingly sharp. Older plants may have an exposed lower trunk, but the old leaves are generally very persistent and hide the trunk from view..

The many-branched inflorescences of Trithrinax campestris emerge between the upper leaf bases, with four large papery cream-colored bracts initially encasing the floral branches. The bracts are split open and pushed aside by the expanding inflorescence, exposing the hundreds of tiny cup-like pale yellow flowers. The stamens have yellow filaments extending well beyond the petal-tips, topped by anthers which are laden with white pollen. The flowers are very attractive to bees, and this palm is said to yield good honey.

Plants of T. campestris are capable of being self-pollinated, so it is not necessary to have more than one specimen in order to get fruit. The round fruits are .8 inch in diameter (2 cm) or a little less, and they are green initially, but lighten to pale yellow or pale greenish-yellow when ripe. The ripening process takes nearly a year. The fruit has a thin juicy outer layer, and within is the single brown seed, looking like a miniature coconut. The seeds are about a half-inch in diameter (1.75 cm).

T. campestris is one of the more cold-tolerant palms, and can endure winter lows down to 15° F or even lower (-10° C). However, it prefers dry winters rather than wet ones, so it is important to make sure it has good drainage in a winter-rainfall area such as ours in California. 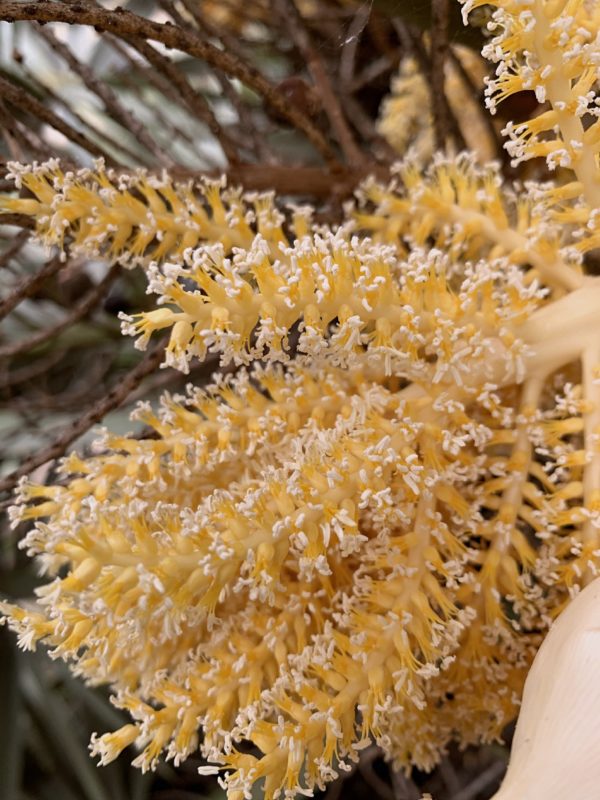 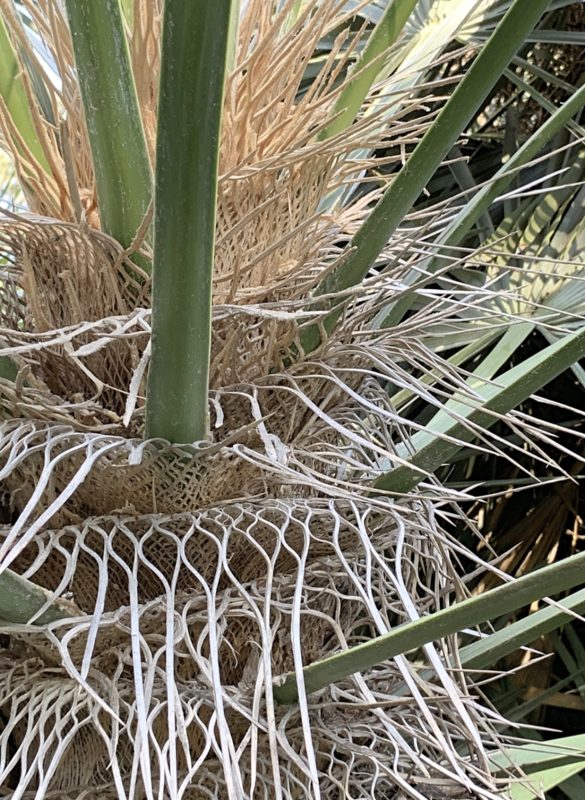 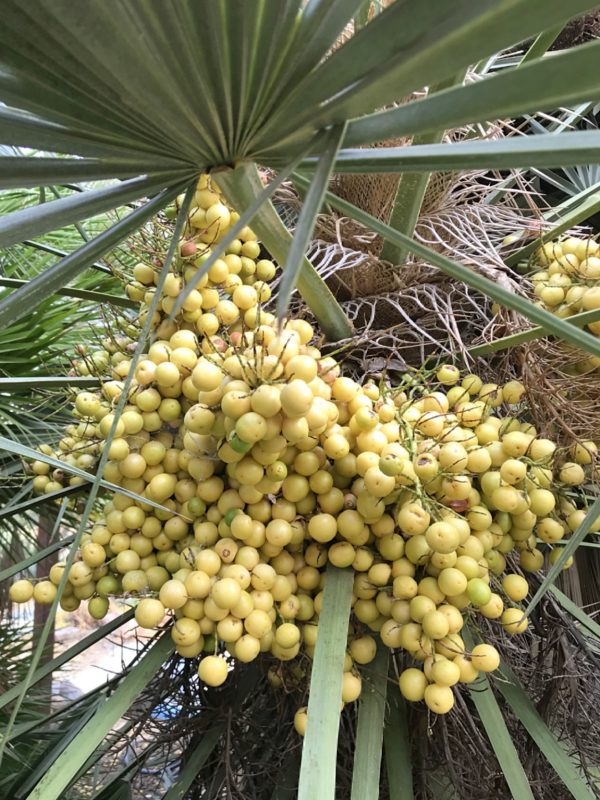 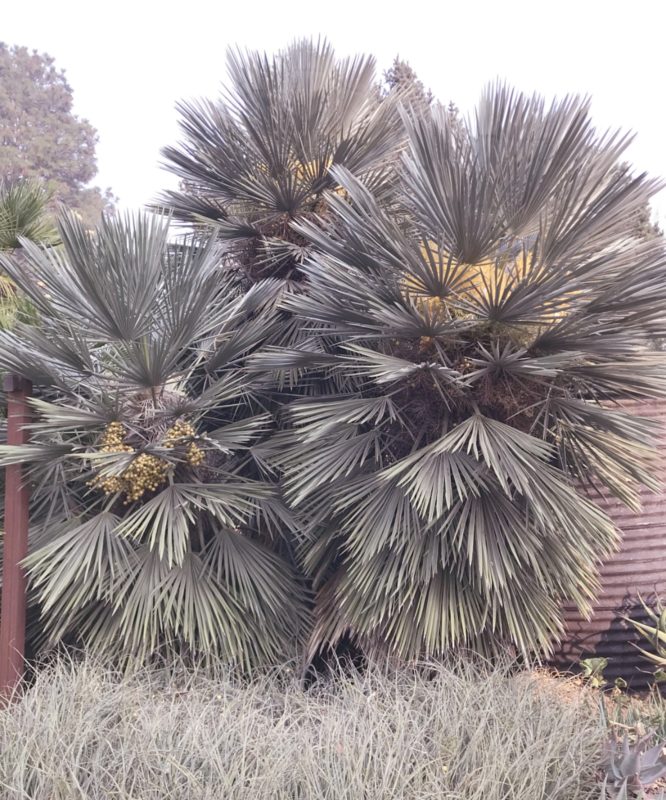