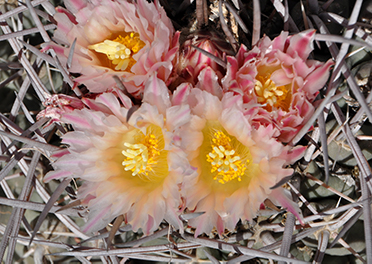 Thelocactus is not a large genus, containing a dozen or so species native to north-central and northeastern Mexico and across the border into southern Texas. They vary greatly in their spination, which can be sparse or so dense as to hide the body from view. Their large flowers range from white to pink to magenta, or occasionally yellow. Some species form clumps regularly, but others are single or with an occasional offset. The largest species of all is Thelocactus rinconensis, which is found in the Mexican states of Coahuila and Nuevo Leon
.
Thelocactus rinconensis can grow to a diameter of as much as 8 inches (20 cm), and its profile can be 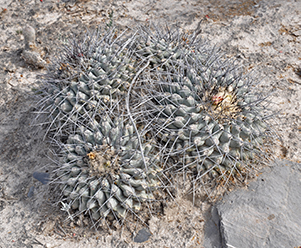 hemispherical or more flattened. The body is made up of thimble-like tubercles, each topped with several stout spines whose length varies greatly from one population to another. In some populations there are also smaller spines (called radial spines) around the edge of each spine cluster. In the forms with stouter spines, it is common for the older ones to become shredded with age, a character not often seen in cacti. The color of the plant body ranges from pale blue-gray to grayish-green. Although plants are most often single-headed, they may sometimes have a few offsets.

Like many kinds of cacti, Thelocactus rinconensis tends to flower in bursts. The first burst comes in early spring (generally between mid-March and mid-April at the Ruth Bancroft Garden), and several weeks may pass between flowering episodes. The last flowers may come as late as mid-September. The flower color is usually white or pale pink, sometimes with some yellow at the bases of the petals, but there are also deeper pink forms reported. 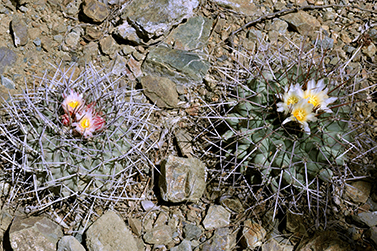 Although the part of Mexico where T. rinconensis grows is not a winter-rainfall region, plants can endure our wetter California winters if given plenty of sun and excellent drainage. This species can take winter temperatures down to the low 20’s F (about -6° C).