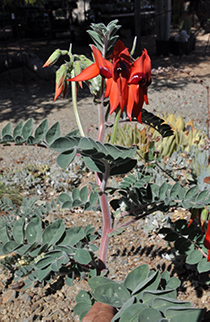 The Pea Family, Fabaceae, has a very wide distribution around the world, and it contains a diverse assortment of plants from huge trees to small annuals. Among these is a remarkable species from Australia named Swainsona formosa.

Swainsona formosa has flowers which do not look like others in its genus, and they bear a resemblance to plants from new Zealand in the genus Clianthus. These latter are commonly called Lobster Claws, and Swainsona formosa was originally grouped with them and given the name Clianthus formosus. However, the resemblance proved superficial, and its true relatives turned out to be plants with more typically pea-like flowers in the Australian genus Swainsona, so it was re-named.

Swainsona formosa has a large distribution in the dry interior parts of western and southern Australia, and it is the official flower of the state of S 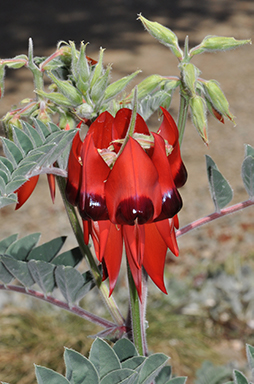 outh Australia. It is a short-lived perennial, but is often grown as an annual in Australian gardens. It is sometimes called by the common name of Sturt’s Desert Pea. Depending on the locality, plants may grow as prostrate spreaders or as bushes.

The compound leaves of Swainsona formosa have up to 15 gray-green hairy oval leaflets, and when the plant matures it produces many clusters of odd-looking red flowers with a glossy dark swollen area in the middle. Though red is by far the most common flower color, pink and white forms are also known. The flowers are quite large, up to 9 cm (3½ inches) long, and the red petals come to a point at the top and bottom, while the central glossy “eye” is dark purple or black. There are 5 or more flowers per cluster, and together they put on quite a show.