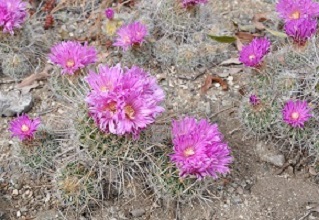 One of the interesting smaller genera of Mexican cacti is Stenocactus, found in the central and northeastern parts of the country.  For many years, this genus had two competing names, Stenocactus and Echinofossulocactus, but the former is now the accepted name.

Plants in the cactus family often have ridges running down the length of their stems, with troughs between them, and the term for these ridges is “ribs”.  Usually the ribs are more or less straight, but sometimes they spiral around the body of the plant.  Many plants in Stenocactus are unique in having narrow ribs which wiggle back and forth in a serpentine fashion as they make their way down the sides of the plant.  These sinuous ribs are very evident in plants with a modest covering of spines, but less easy to make out in the densely-spined Stenocactus ochoterenanus, native to central and east-central Mexico.

Stenocactus ochoterenanus is normally single-headed, but our plants differ in producing offsets to make a 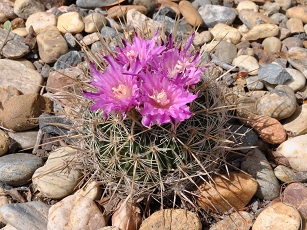 small clump.  The spine clusters are closely-set along the ribs, each one having four stouter flattened spines at the center of the cluster (one of them being especially long and standing out from the others), and a large number or shorter needle like spines surrounding these.  The four central spines are yellow or straw-colored, while the outer spines are white to off-white.

Stenocactus species generally flower in late winter to spring, and at The Ruth Bancroft Garden S. ochoterenanus is the first to begin, commencing in late February.  It produces flush after flush of flowers through March and into April.  Flowers in this species are generally light pink with a deep pink or purplish stripe down the center of each petal, arising at the top of the plant.