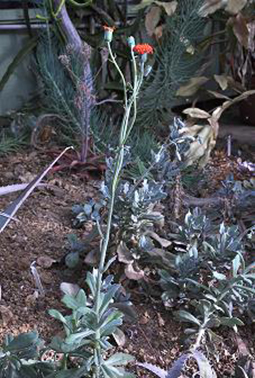 Though it is one of the largest families of flowering plants, the Daisy Family (Asteraceae) does not contain a great number of succulents.  Even so, there are two genera in the family, Senecio and Othonna, with a delightful assortment of succulents, many of them native to South Africa.  The larger and more diverse of the two groups is Senecio.

There are about 1500 species in the genus Senecio, found all around the world, and the majority of these are non-succulent (a familiar example is Senecio cineraria, commonly called Dusty Miller).  Still, there are over fifty succulent ones, ranging from large shrubs to dwarf creepers.  One of these is a clumping species, Senecio fulgens, which attains a height of up to two or three feet (60 – 90 cm).  Some botanists divide Senecio into two genera:  Senecio and Kleinia.  Under this classification, S. fulgens is given the name Kleinia fulgens.

Senecio fulgens comes from the eastern part of South Africa, and northward 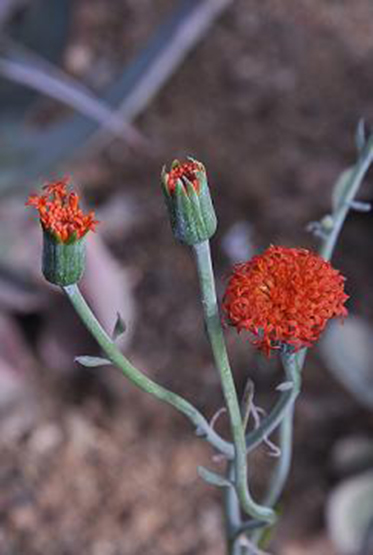 into adjacent countries in Tropical Africa.  It has fleshy cylindrical stems, initially upright but eventually sprawling and rooting where they touch the ground.  The base, where the stem meets the roots, becomes swollen over time, and potted plants are sometimes raised when they are re-planted to show this off.  The succulent leaves start out spoon-shaped with a trough or groove down the middle, but as the stem lengthens the wide part of the leaf develops a few tooth-like lobes at the edges.  The leaves are a milky blue-green on their upper surface, with a flush of purple on the underside.

Like other members of the Asteraceae, Senecio fulgens has clusters of tiny flowers which are packed together in a cup-like structure; this type of flower cluster is called a capitulum.  In many daisies, and some species of Senecio, the flowers in the outer ring of the cluster (called ray florets) have one elongated petal each, so that the whole cluster has the appearance 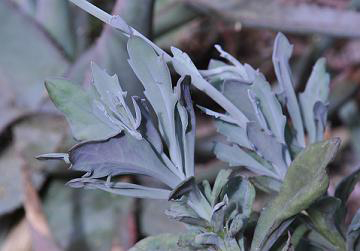 of being a single flower.  S. fulgens lacks these ray florets, but the vivid red-orange color of the flowers is quite eye-catching, especially considering the contrast they provide to the pale blue-green of the leaves.  The flowers emerge in winter to early spring.  The tiny seeds of this species have feathery appendages as an adaptation for wind dispersal.

Senecio fulgens does not have much tolerance for cold, so we grow it in our winter house, where a heater keeps the frost away.