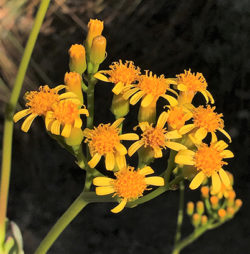 Senecio is a large genus of about 1500 species in the Asteraceae, or Daisy Family, and it includes both succulent and non-succulent plants. While many of the succulent ones are African, there are some excellent examples from Madagascar as well. One of these is Senecio decaryi, which grows on rock outcrops in the south-central part of the country. 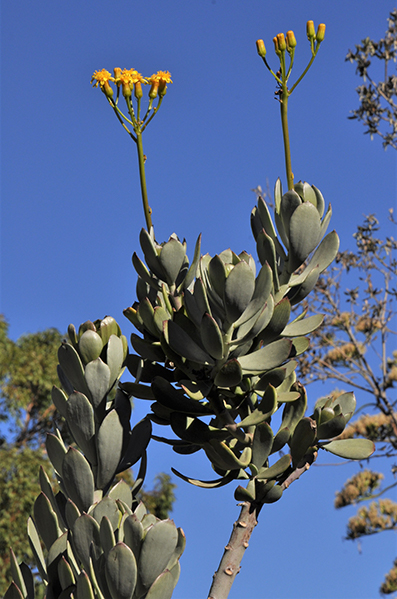 Senecio decaryi is a shrubby species, growing to as much as 4 feet or so in height (1.2 m), with branching at the base as well as higher up. The spread of the plant often exceeds its height. The succulent leaves are spoon-shaped with a small point at the tip. Initially they are glossy green and held upright, so that their purple-veined backs are visible. As they mature they become more spreading and gray-green, with the veins no longer prominent. Mature leaves are up to 3 inches long (7 ½ cm) or a little more.

The flowering time for Senecio decaryi is generally during the summer and fall months, and plants may go through more than one bout of flowering in a year. Our plant at the Ruth Bancroft Garden has flowered as early as June and as late as November. The 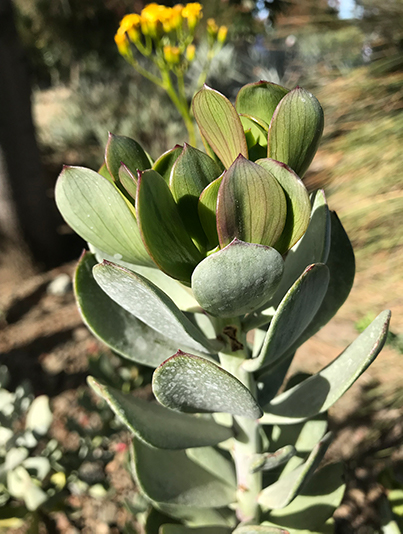 inflorescences emerge from the tips of the branches, rising to a height of up to ten inches and branching at the top to yield a bouquet of yellow flowers. As with all members of the family Asteraceae, the flowers are clustered inside a cup called a capitulum, with the cluster giving the appearance of a single flower. This impression is greatly enhanced when a ring of flowers around the edge of the capitulum, called “ray flowers”, sport a single long petal each, resulting in the classic “daisy” look, as seen with this species (some other species lack the ray flowers). In the case of Senecio decaryi, the ray flowers are bright yellow, while the disc flowers at the center are yellow-orange. 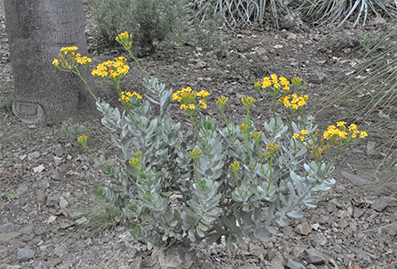