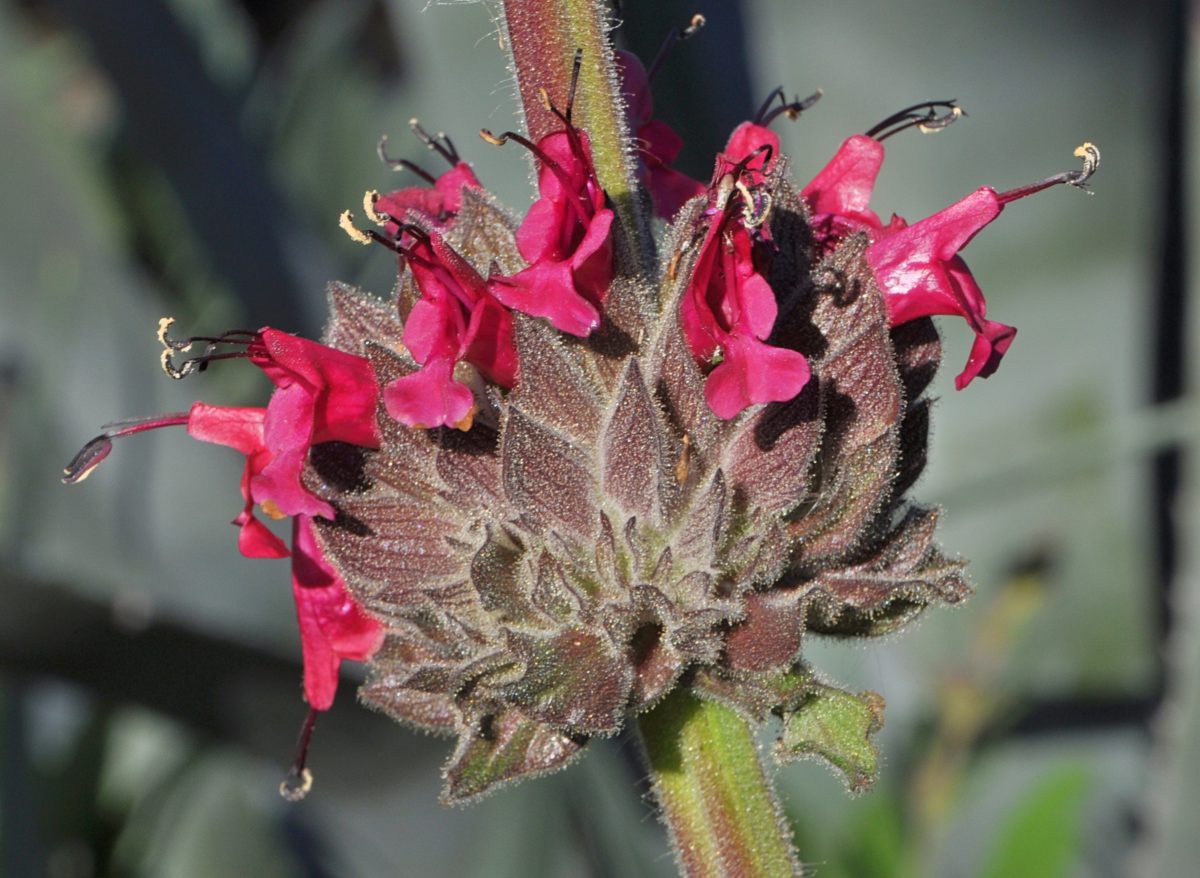 The genus Salvia is a very large one, with more species than any other genus in the Mint Family (Lamiaceae). It is difficult to say with certainty just how many it has, since various authors disagree on what should be counted as a species, but something like 700 to 1000 would be a resonable estimate. Though these occur around the world, the majority are from the Americas, including 18 species native to California. One of the latter is Salvia spathacea, commonly known as hummingbird sage.

The native range of Salvia spathacea follows California’s Coast Ranges, from Solano County in the north down to San Diego County. It grows in a variety of habitats, from coastal scrub to chaparral to oak woodlands, in areas with an annual rainfall total of anywhere from 14 to 43 inches (36 to 109 cm).

Salvia spathacea is a delightfully aromatic perennial herb, spreading by rhizomes to form a clump up to about 4 feet in diameter (1.2 m). The erect leafy stems reach a height of up to 20 inches (50 cm), with the inflorescences rising above this when the plants are in flower. The leaves are shaped like trowels or elongated arrowheads, and they are covered with tiny bumps, giving them a highly textured appearance. The leaf margins are curled under. The stems and leaves are also fuzzy due to a coating of short hairs, and these are very pale on the leaf undersides, giving a fuzzy-frosted look. The stems are four-sided, a trait that is frequently seen in plans of the Lamiaceae.

When Salvia spathacea comes into flower, in the latter part of winter or early spring, its flower spikes rise above the foliage, reaching a height of up to 30 inches (76 cm). with whorls of flowers at intervals along the stem. Each successive whorl is a little smaller than the preceding one, giving a pagoda-like effect. At the bases of the flowers are large fuzzy bracts, which may be purple-tinged, dark purple, brownish or maroon. Protruding from the clusters of bracts and the similarly-colored sepals are the showy two-lipped tubular flowers, which come in various shades of pink or magenta. The curved styles and stamens extend well beyond the mouths of the flowers. At the Ruth Bancroft Garden, the flowering period usually ends sometime in the first half of June.

As a plant native to our area, Salvia spathacea is quite successful as a garden plant here in northern California. It will do fine with no supplemental irrigation at all, but occasional watering in May and June can extend its growing season, and it will not complain if it gets occasional water during the summer months. It is a great plant for dry shade, but it can be grown in a sunny spot as well. 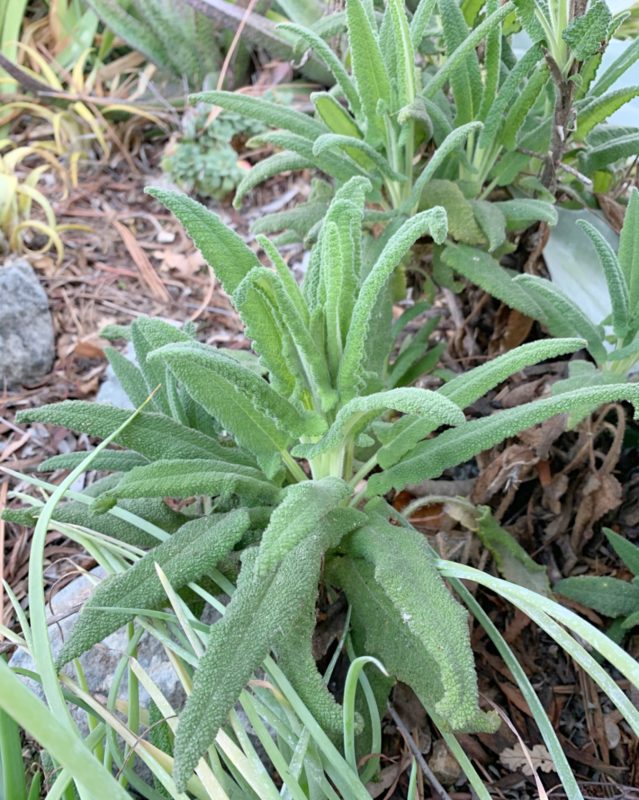 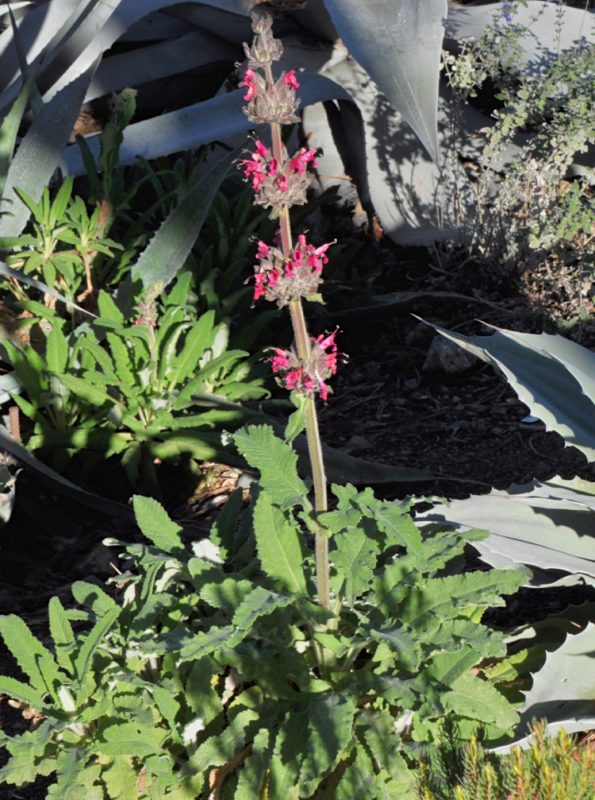 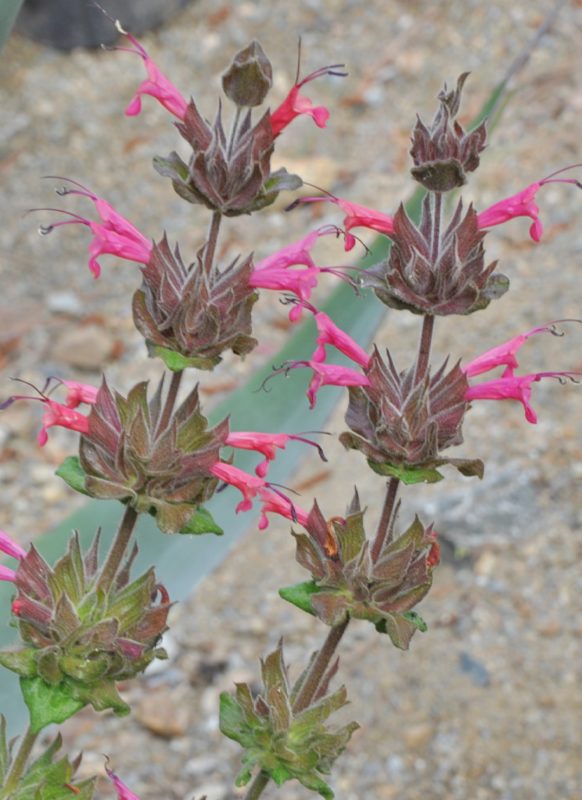 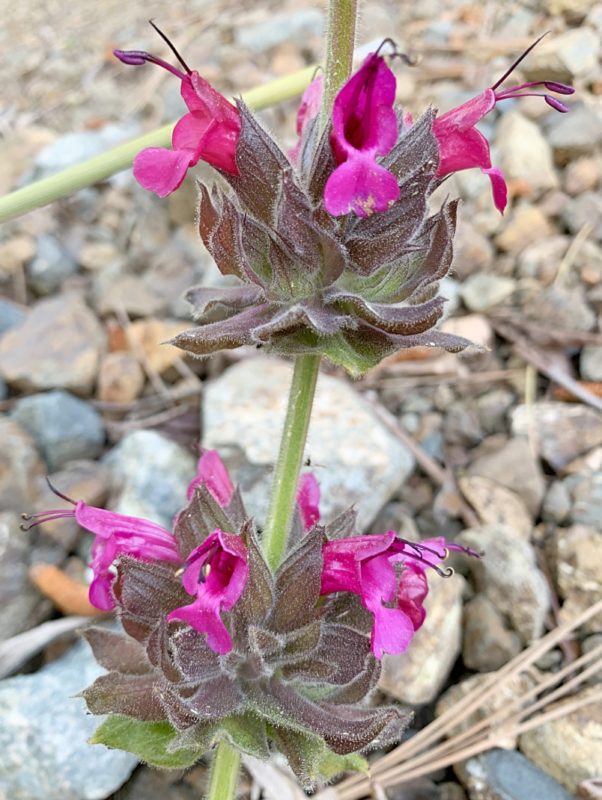