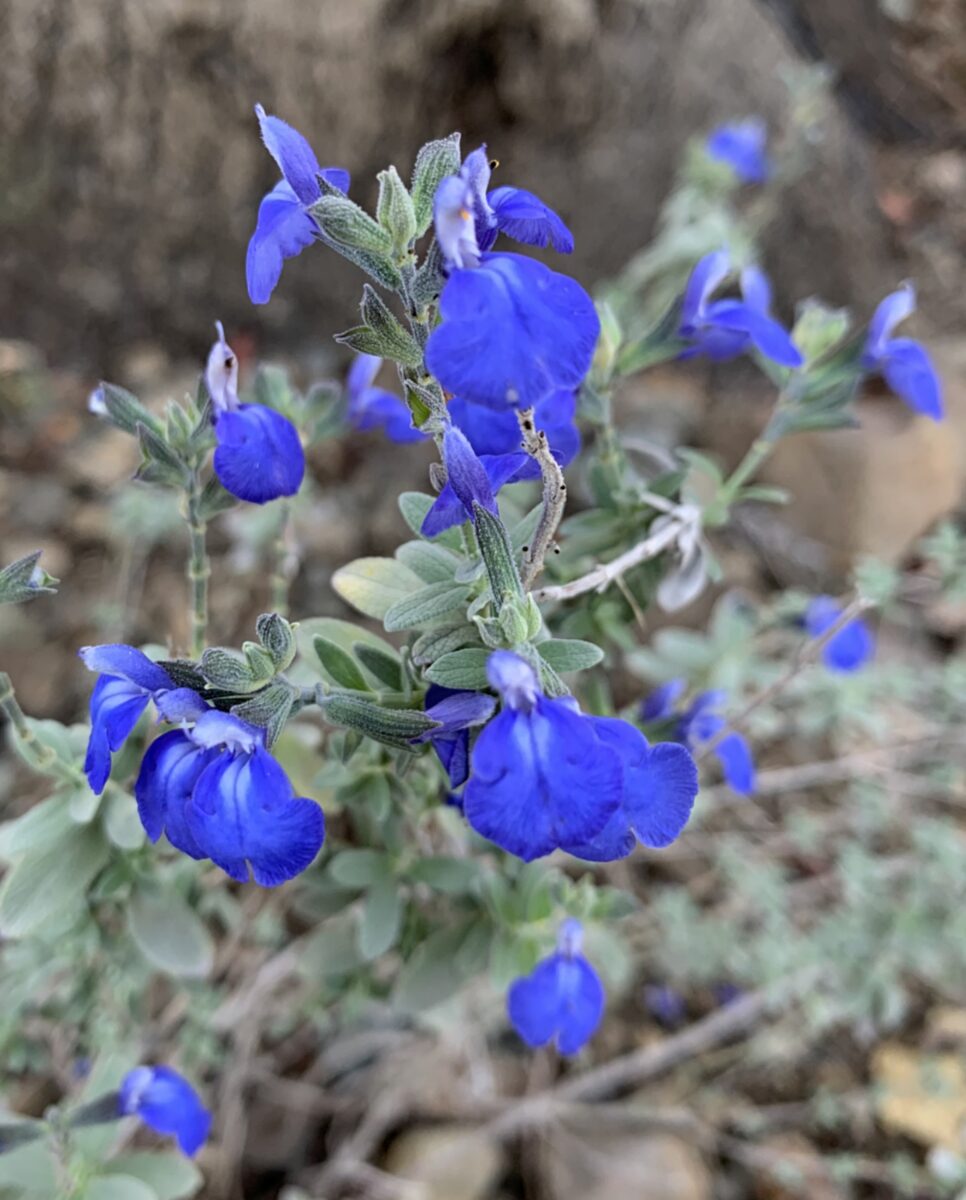 Salvia is a large genus in the Mint Family (Lamiaceae) containing over 900 species of herbs and shrubs found around the world. Their stems have a tendency toward squareness (that is, they are square, or square with rounded edges, in cross-section), and their flowers are two-lipped, with the lower lip typically bent downward and flared, while the upper lip is often hood-like. Mexico is home to many species, including Salvia chamaedryoides, which grows at 7000 to 9000 ft. altitude (2100 to 2800 m) in Mexico’s Sierra Madre Oriental mountain range. It occurs in relatively dry habitats just east of the Chihuahuan Desert, where it grows in sun or in light shade.

Salvia chamaedryoidesis a small perennial shrub with a height of 12 to 18 inches (30 to 45 cm), and a spread of up to several feet. It becomes wider over time as new shoots arise from the spreading rootstock. Its felted oval leaves are from .32 to .79 inch long (.8 to 2 cm) and pale gray-green, with a network of recessed veins visible on the upper surface. The leaf edges usually are minutely scalloped.

The flowering period for S. chamaedryoides is from spring to late fall or early winter. Plants often have a blooming peak in late spring to early summer, and then another one in the autumn when temperatures start to cool down. The showy deep blue flowers are are an inch long or a little less (2 to 2.5 cm), held in small clusters along the upper part of the ascending stem. The upper lip of each flower is hood-like and arching, while the broader lower lip has rounded lobes. The contrast between the gray of this salvia’s foliage and the vivid blue of its flowers makes it a very desirable garden plant.

S. chamaedryoides is a drought tolerant plant that needs sun and good drainage to thrive. It will accept light shade, or full sun for only part of the day, but deeper shade does not suit it. Although it is generally evergreen, it may drop some leaves and look sparser during winter cold spells. It has survived temperatures as low as 10° F (-12° C), re-growing from the roots even after all the foliage was lost to frost. 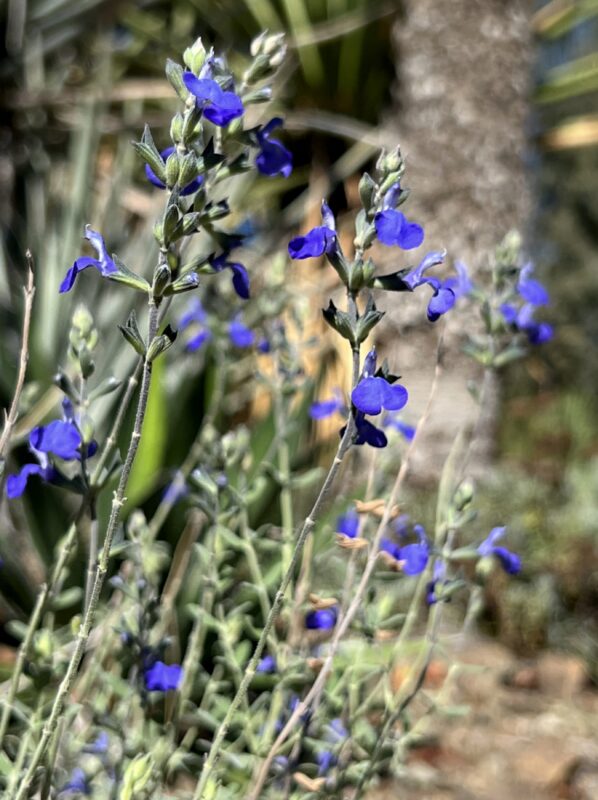 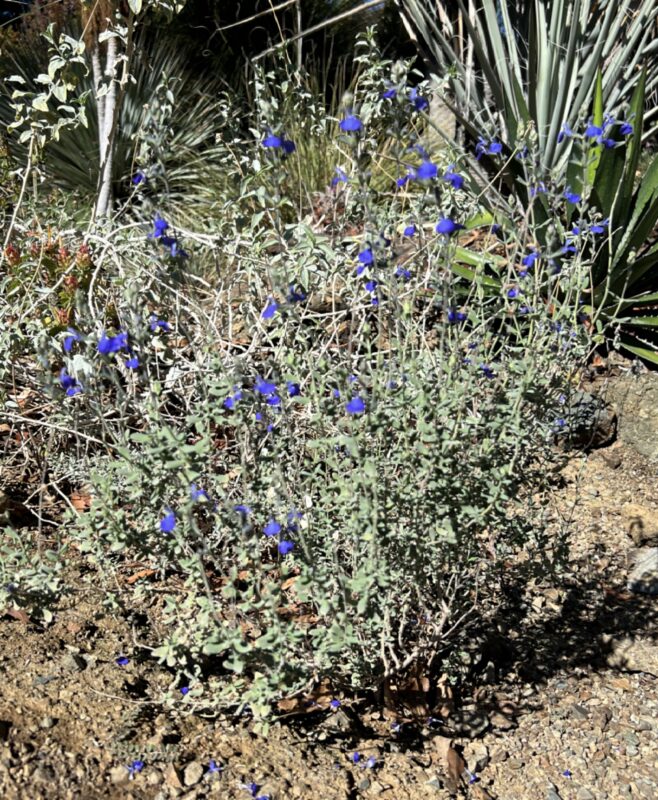 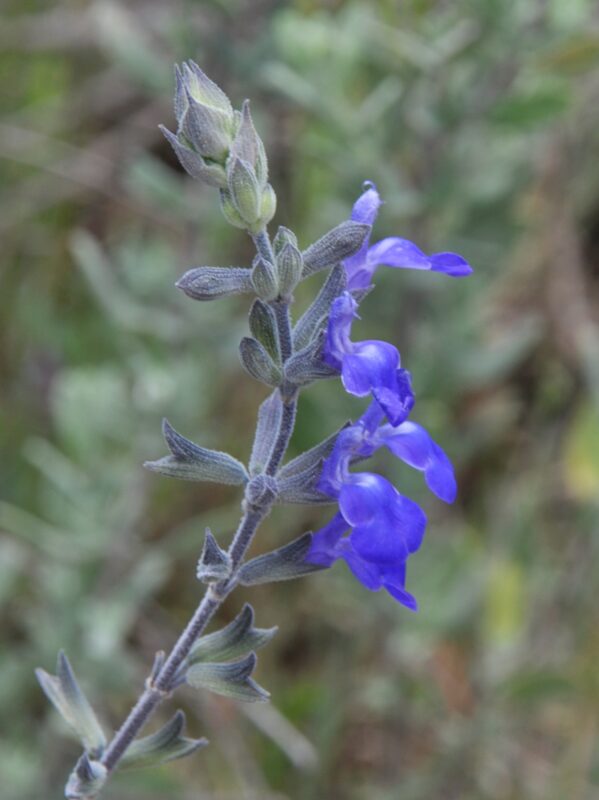 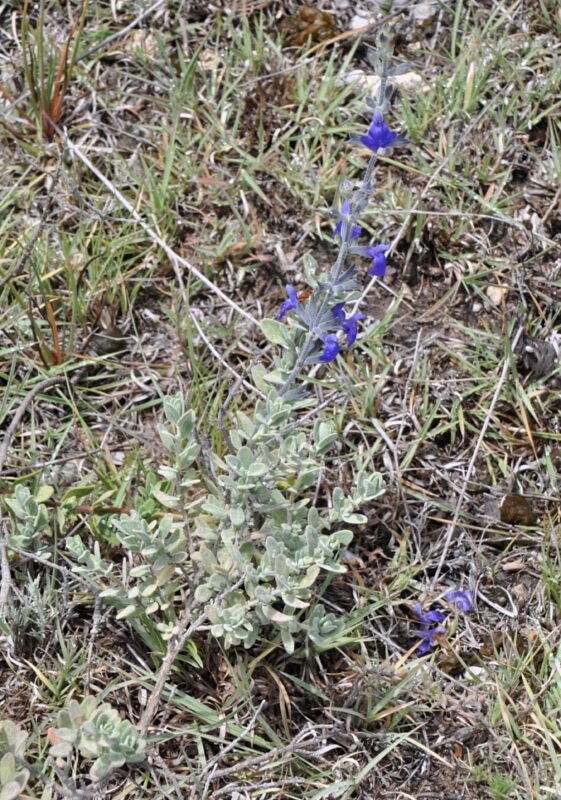