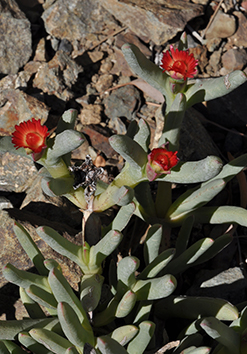 The Ice Plant Family (Aizoaceae) is a large one, with many genera and over a thousand species.  The succulent ones are commonly called “mesembs”, after the genus Mesembryanthemum, and the majority of them occur in southern Africa. The largest genus in the family is Ruschia (220 species are listed in Mesembs of the World, published in 1998), and these are found over much of central and western South Africa, as well as in the southern part of neighboring Namibia and in the tiny country of Lesotho. 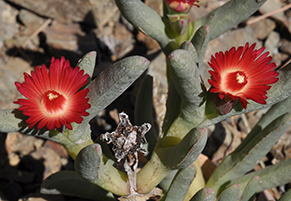 Most Ruschia species have flowers in the pink to purple range, or sometimes white. An exception is the red-flowered Ruschia dichroa, from near Clanwilliam in the winter-rainfall area of western South Africa. The attractive red of the petals is often set off by a band of white around the central cone of stamens, though some plants may have flowers which are all red. The flower diameter is listed as up to 4 cm (about an inch and a half), but our plant at the Ruth Bancroft Garden has flowers somewhat smaller than this. Spring is said to be the main flowering period for Ruschia dichroa, but since our plant has already begun blooming in the fall, we hope it will continue through the winter.

Ruschia dichroa has trailing stems, but these do not spread widely, and over time it tends to mound and form a small shrublet. It has chubby 3-sided finger-like leaves which are gray-green to bluish-green in color and up to 4 inches in length (10 cm).