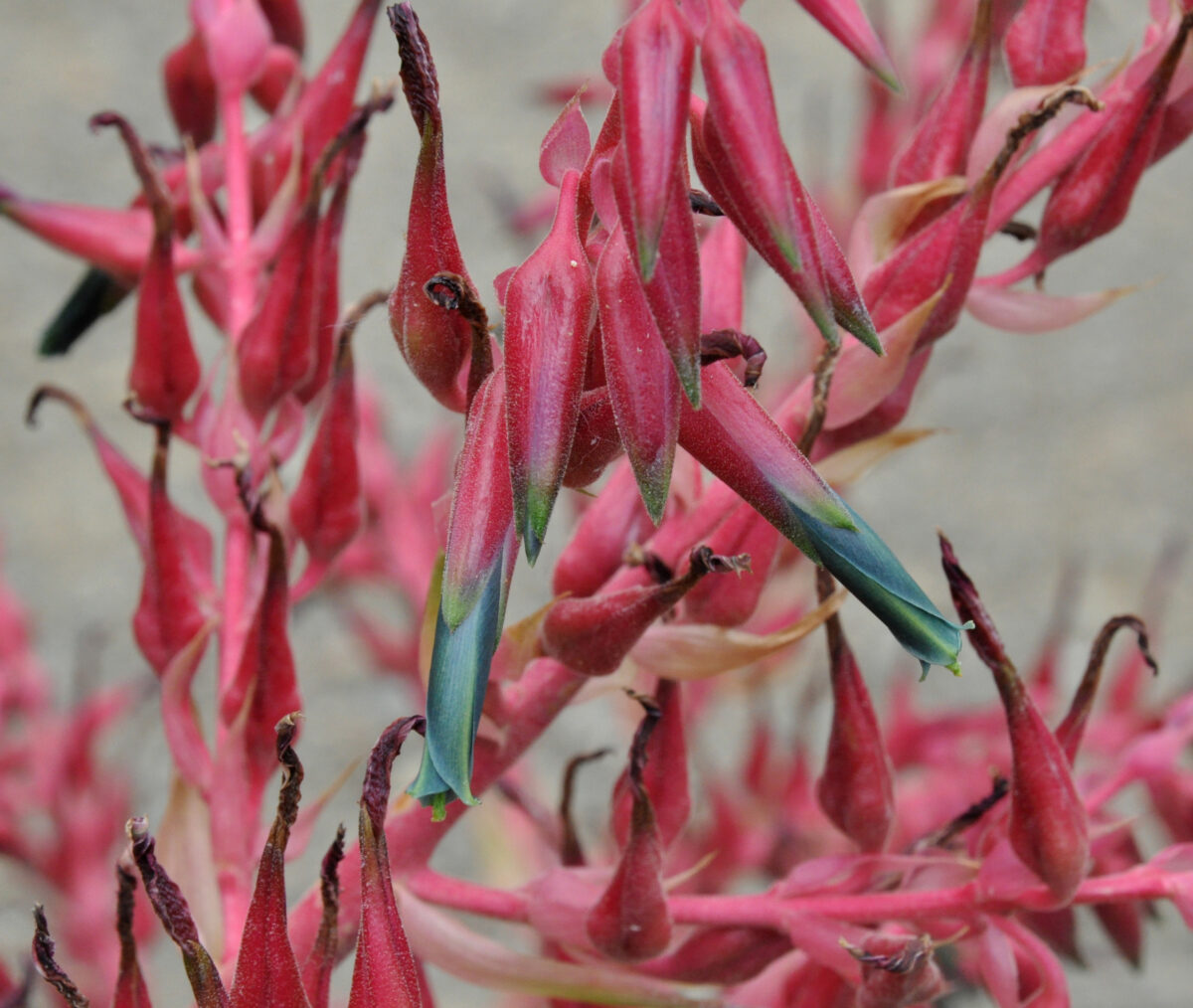 The genus Puya is a large group of South American bromeliads, with 168 species listed in a 1974 monograph. The impressive Puya raimondii, from high in the Andes in Peru and Bolivia, is the largest species in the whole Bromeliad Family. The distribution of the group basically follows the Andes mountain chain from Chile and Argentina in the south up to Colombia, with outliers in the uplands of Venezuela and in Costa Rica. Many species of Puya have showy inflorescences and unusual flower colors, and Puya spathacea, from north-central Argentina, is an excellent example.

The type locality of Puya spathacea is in Cordoba Province, to the northwest of Buenos Aires, and it occurs also in the neighboring provinces of La Rioja and Catamarca. In addition, it has been reported from Tarija Department in southern Bolivia. It is a clump-forming species, with many heads of leaves packed together in a tight group. A mature clump is about 3 feet or so in height (1 m), with strap-like green or gray-green leaves up to 3.6 feet long (1.1 m). The undersides of the leaves are markedly paler, since they are densely covered with tiny silvery scales. The leaf width is 1.2 to 2 inches (3 to 5 cm), and the margins have small but sharp teeth that are bent towards the tips of the leaves.

The flowering time for Puya spathacea is in late spring to summer, and our plants at the Ruth Bancroft Garden generally flower between May and late June (note that in its native habitat, spring would come at the opposite time of the year). The height of the flower stalks is quite variable, with some plants having stalks not much higher than the leaves, while others are considerably taller. The overall impression of the inflorescence is of red or pinkish-red, but this not due to the flowers themselves. The red or pink color comes from the stalk and its branches, from the bracts at the bases of the branches and of the flowers, and from the sepals. The flowers are held on side branches that emerge at an angle from the stalk, and these branches may be up to a foot long (30 cm), though they are often less than this. The narrowly tubular flowers are shades of blue and green, grading from yellow-green to dark green to indigo. On each floral branch, the flowering proceeds from the base upward, and there are seldom more than two or three flowers open at any given time. As the flowers wither, they darken and twist themselves into a spiral, as is typical of flowers in the genus. The rounded seed capsules contain small flattened seeds with a papery margin. 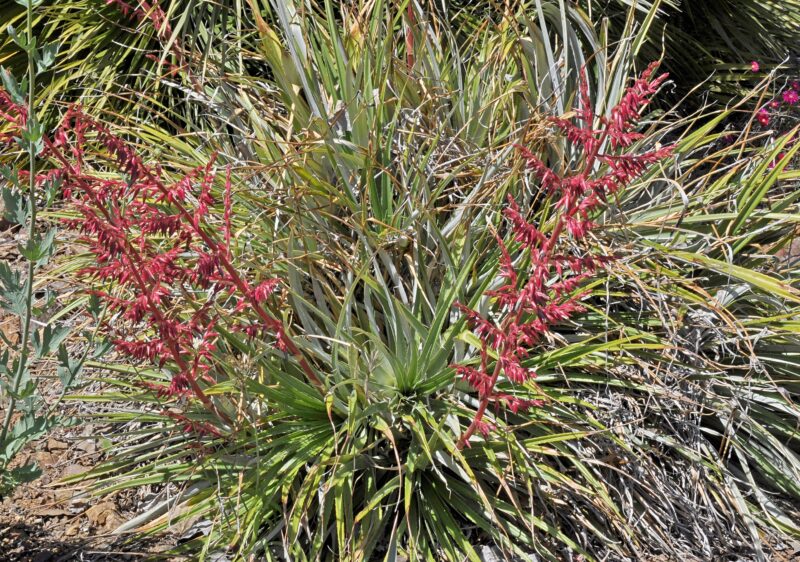 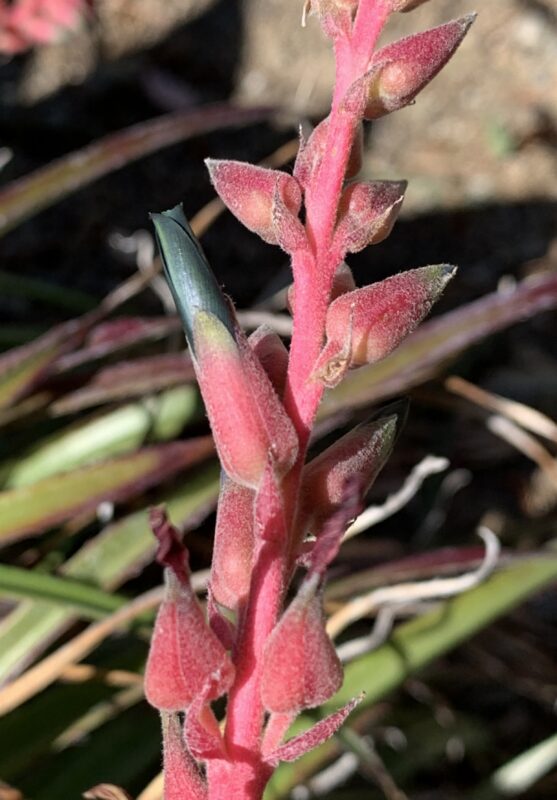 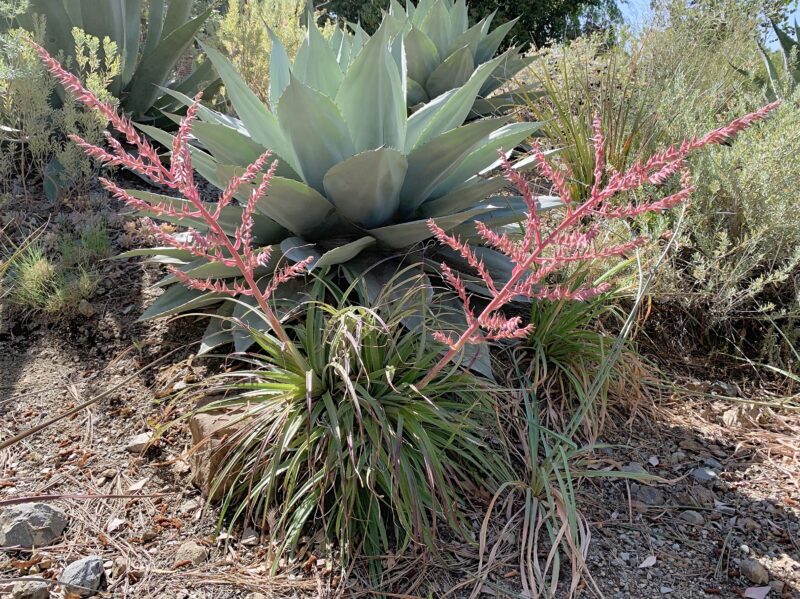