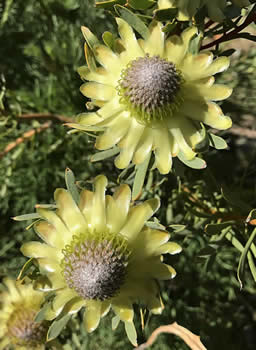 The Protea Family, Proteaceae, is primarily a Southern Hemisphere group, with most of the species found in Australia and South Africa. There are outliers extending farther north (up into Southeast Asia and various Pacific Islands on the one hand, and up into tropical Africa on the other), and also some found in Central and South America, but the great majority of the plants in cultivation come from either South Africa or Australia. The flowers of members of this family are a source of amazement, and many are popular as cut flowers. It is worth noting that what florists refer to as a Protea “flower” is correctly referred to as a “flower head”, since it is an artfully arranged cluster of small flowers, surrounded by colorful bracts (in some species, these have feathery rims). 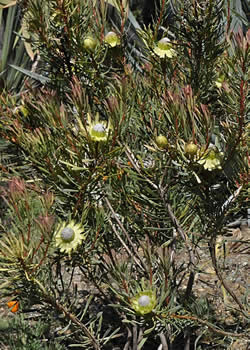 The type genus of the Proteaceae, lending its name to the family, is the genus Protea. It contains over 80 species, with most of them native to the southwestern part of South Africa, but with some extending into other parts of the country and northward nearly to the equator. One of the southwestern ones, native to coastal areas near Cape Town, is Protea scolymocephala.

While some Protea species grow as small trees, P. scolymocephala is a small, well-branched rounded shrub up to 5 feet tall (1.5 m). It has narrow strap-like green leaves with pointed tips, and these are typically about 2 inches long, though this varies from plant to plant. The uppermost new leaves are often red-tinged.

The main flowering period for Protea scolymocephala is spring, with the first flowers opening in late winter. At the bud stage, the flower heads are round and covered by the overlapping red-tinged bracts, like fish scales. At maturity, the bracts spread widely, with their pale yellow or greenish-yellow inside surfaces forming a ring around the cluster of flowers. 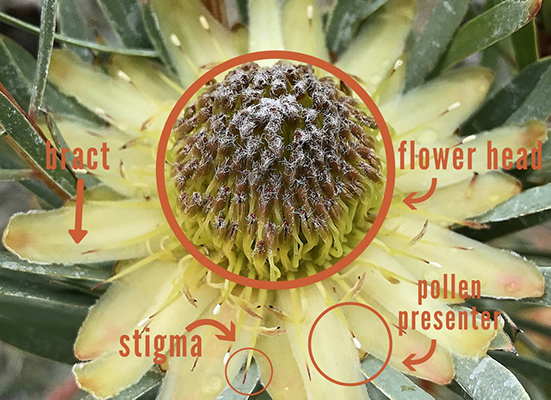 Protea flowers have an unusual structure, with four tepals (the segments of the floral envelope) which are initially fused into a tube and capped at the top. Near the tips of the segments are the pollen-bearing anthers, and in the middle is the pistil (the female part of the flower). As the pistil elongates, it comes into contact with the anthers and collects pollen on its tip, which is known as the “pollen presenter”. The growth of the pistil splits open the flower, and at this point the pistil is the only part of the flower that matters. At first, the stigma (where pollen will eventually lodge to pollinate the flower and produce seeds) is not receptive, and its dusting of pollen makes it a de-facto anther, ready to shed pollen onto a visiting pollinator. Once the pollen is gone, the stigma becomes receptive, and when a pollinator brings pollen from another plant, fertilization takes place and the seeds begin to develop.