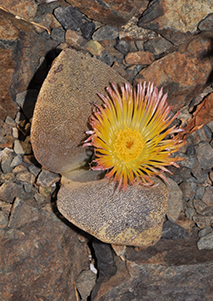 The Ice Plant Family, Aizoaceae, is full of botanical marvels and oddities, and many of these have had delightfully evocative common names bestowed on them. An example is the genus Pleiospilos, which has been given the name “split rock.” There are only four species in the genus, and they are native to the south-central part of South Africa. The name Pleiospilos means “full of dots”, and refers to the small dark spots speckling the surfaces of the leaves.

Pleiospilos simulans is a rare plant in 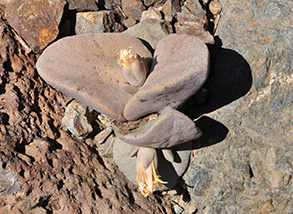 its native habitat. It comes from the southeastern part of the Great Karoo, an arid region in the interior of the country, where it grows in stony places and often blends right in with the stones around it. Like many mesembs (as the succulent members of the Ice Plant Family are known), it has pairs of inflated leaves, with a crease between them from which the flower emerges. This is a fall-flowering species, as is true of the genus in general. 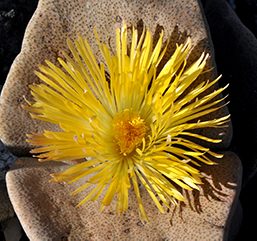 The scented flowers of Pleiospilos simulans do not open until the latter part of the afternoon and into the evening. As is usual for the family, they have many narrow petals surrounding a cluster of stamens, and the petal color for P. simulans ranges from yellow to orange. The flowers are quite large, about 2⅓ inches across (6 cm).

Although the rainfall in its habitat comes mainly in the summer months, Pleiospilos simulans does not need to be kept dry during the winter as long as the