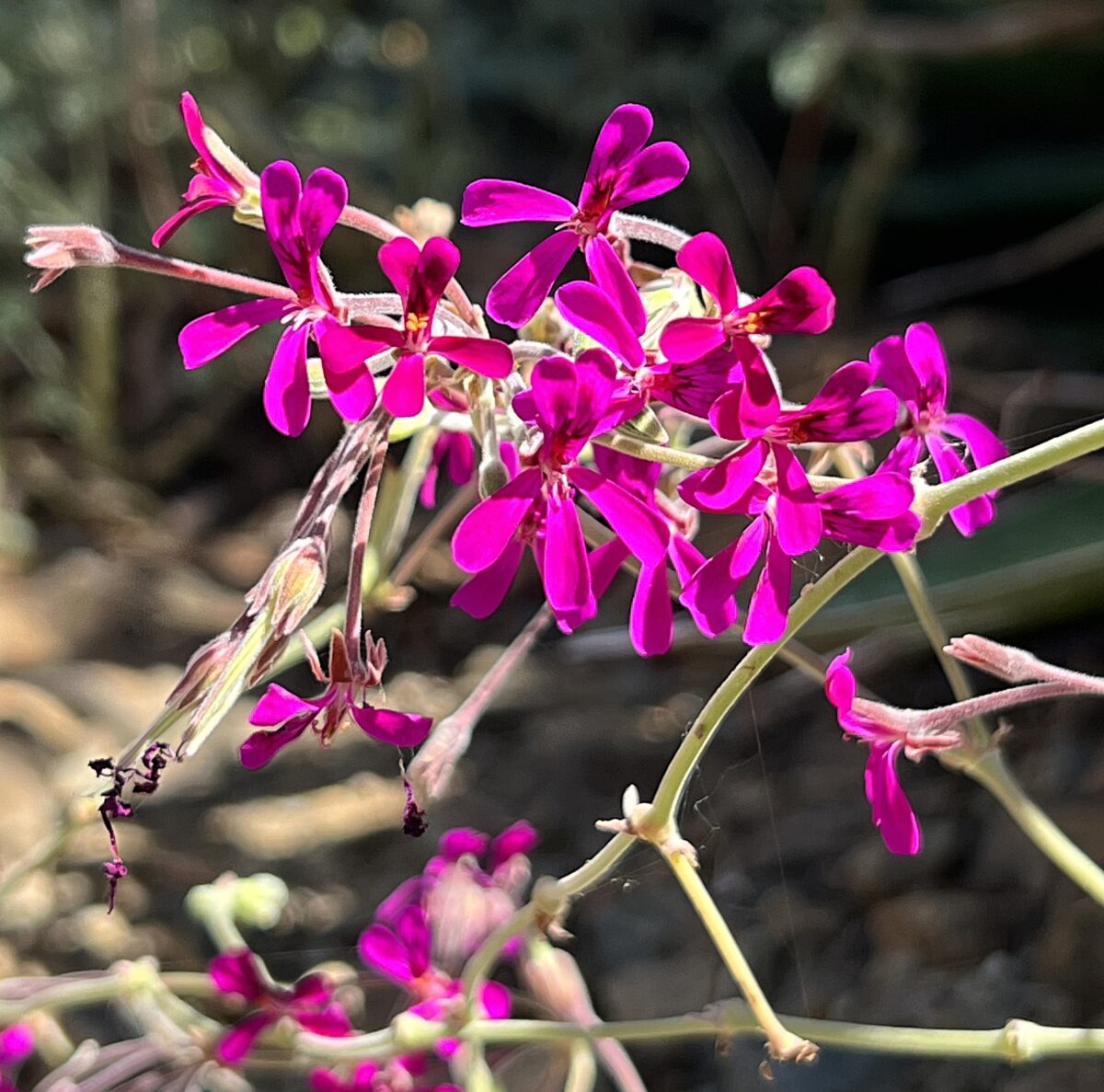 Southern Africa is home to an abundance of Pelargonium species, some of them widely cultivated around the world and commonly called geraniums. This common name is not entirely misleading, since the genus Pelargonium is placed in the Geranium Family (Geraniaceae), but the actual genus Geranium is a separate group within the family. Various species of Pelargonium can be found in both summer-rainfall and winter-rainfall parts of southern Africa, and one delightful species in the summer-rainfall area is Pelargonium reniforme, from South Africa’s Eastern Cape Province.

Pelargonium reniforme is a perennial sub-shrub that varies in its growth form. Some plants have a prostrate spreading habit, with the branches spreading laterally and resting on the ground, with a height of 5 inches or less (13 cm). Plants that grow more erectly may attain a height of as much as 3 feet (90 cm), though they are usually less than half this. In either case, they have a thickened tuberous root and multiple branches arising from this. In nature, P. reniforme often grows in grasslands subject to periodic fires, and its tuberous roots enable it to survive burning and re-sprout new banches afterward. The older branches become woody at the base, and they bear attractive gray-green velvety leaves, with the covering of short hairs catching the light and imparting a silvery appearance, especially at the crisped margins. The leaves are bluntly heart-shaped to kidney-shaped (reniforme means kidney-shaped, in reference to this), sometimes slightly lobed. Younger leaves often appear rounder than this, since they can be somewhat cupped, with the two sides of the lower leaf (flanking the leaf-stalk) overlapping. The leaf-stalks, or petioles, are variable in length, but they may be as much as 3½ inches long (9 cm). The leaf diameter is about an inch (2 to 3 cm), with the lower leaves a little larger than the upper ones. At the Ruth Bancroft Garden, our plant’s largest older leaves have been as much as 5 cm across – nearly 2 inches.

Though P. reniforme does not necesssarily flower continuously all year long, in milder climates it is capable of flowering at any time of year. The long slender flowering stems are branched, bearing clusters of from five to twenty flowers. Though the inflorescences vary in length, they may be as long as 24 inches (60 cm). Each flower has five relatively narrow petals, with the upper two overlapping and sporting dark purple markings, while the lower three are splayed apart and unmarked. The flower color ranges from deep pink to magenta.

P. reniforme has a close relative named P. sidoides, and this was formerly considered a variety of P. reniforme. While the leaves of the two are very similar, P. sidoides differs in having darker and slightly smaller flowers; they are such a dark shade of reddish-purple that they appear almost black. P. sidoides has a larger distribution, being found not only in the southeastern part of South Africa, but also northward to southern Zimbabwe. 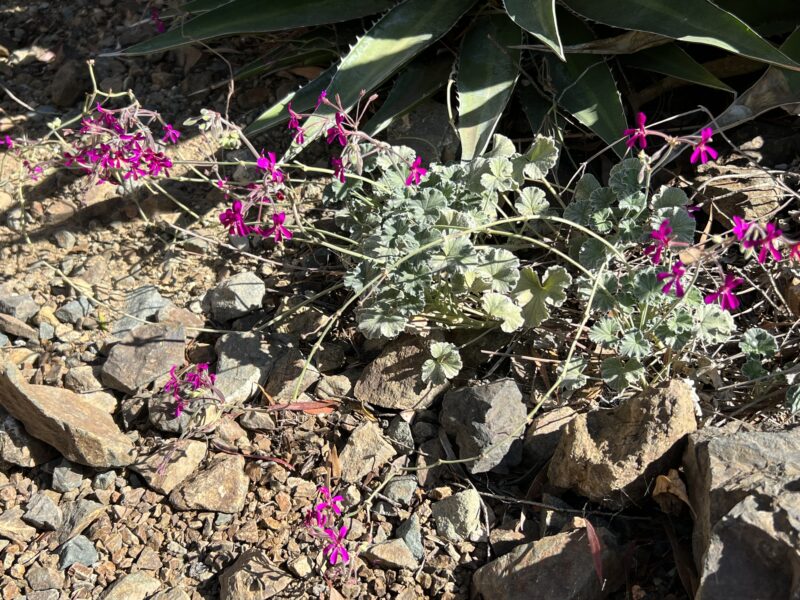 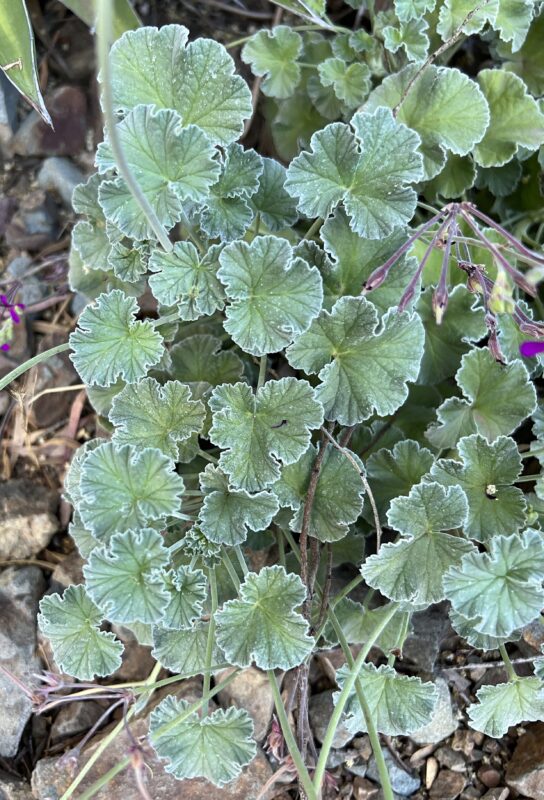 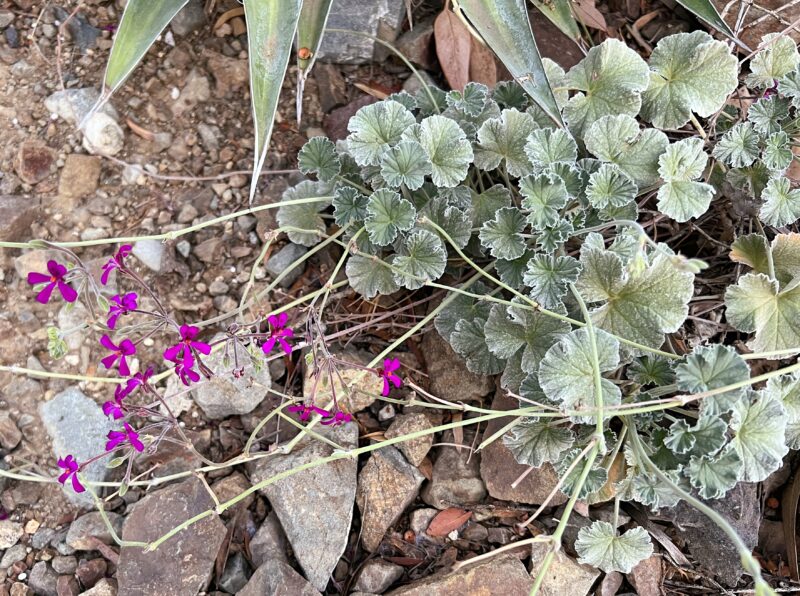