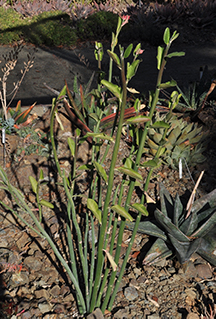 The genus Pedilanthus is a small one native to Mexico and the Caribbean Basin. It belongs to the Euphorbiaceae, or Spurge Family, and many taxonomists now favor including it in the large genus Euphorbia, in which case it would be called Euphorbia bracteata. Since it is listed in most books and nurseries and botanical gardens under the Pedilanthus name, we are still using this for the time being.

Pedilanthus bracteatus is a species from western and southern Mexico, occurring from southern Sonora southward along the Sierra Madre 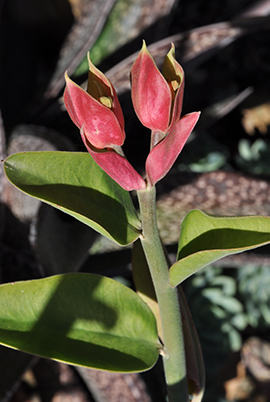 Occidental as far as the state of Guerrero. Like its relatives, it has slender cylindrical stems, and its widely spaced leaves are up to 4 inches long (10 cm). When it loses its leaves during the cold season, it looks like a taller and greener version of its relative Pedilanthus macrocarpus, often encountered in Baja California. Under favorable conditions, Pedilanthus bracteatus may reach a height of 8 feet (2.5 m) or more, though it is more often in the 4 to 5-foot range (1.2 to 1.5 m).

In spring through fall, Pedilanthus bracteatus produces its odd flowers, sandwiched between rounded reddish bracts. Euphorbias and their relatives have specialized flowering structures are called cyathia, 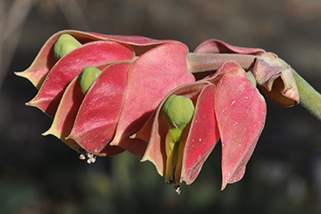 including not only the flowers themselves but also a cup enclosing them, plus glands and appendages. In the case of Pedilanthus bracteatus, the cyathia are green to pale yellow, but the large rounded bracts are more conspicuous.