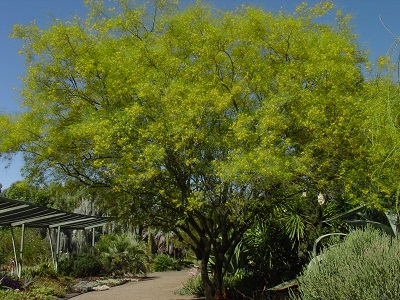 There are several related trees referred to as Palo Verde, which means “green stick” in Spanish, a reference to the green trunks and branches which are characteristic of them.  One of these, Parkinsonia aculeata, is commonly called Mexican Palo Verde.  Though it does occur in Mexico, it is also native to the southwestern U.S. and southward as far as South America.  Its natural range does not extend into California, but it is widely grown in the southern part of the state and has naturalized in some locations there.

Parkinsonia aculeata is not a large tree; it may grow to be as much as 30 feet tall (9 m), but is usually less 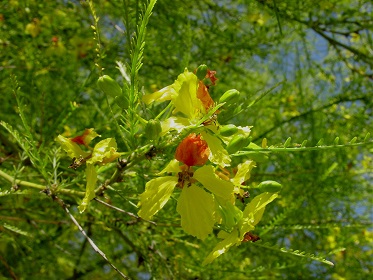 than this.  Its branches have small thorns, and its fine-textured foliage yields dappled light rather than dense shade.  The leaves are divided at the base into long narrow leaflets about 6 to 9 inches long (15 to 23 cm).  Each of these leaflets has a flattened narrow midrib with tiny secondary leaflets arrayed on either side.

This tree begins flowering in June at the Ruth Bancroft Garden and continues until cold weather arrives in the fall.  The flowers are about ¾ of an inch wide (2 cm) and a vivid yellow except for the uppermost  petal, called the banner, which is speckled with red or orange 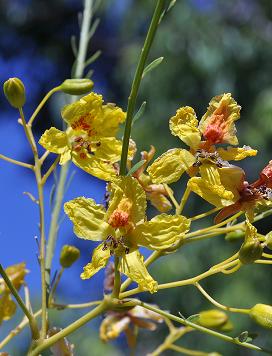 and becomes more deeply colored as the flower ages.

Like other members of the pea family (Fabaceae), Parkinsonia aculeata has bean-like pods which encase the seeds.  The pods are 2 to 4 inches long (5 to 10 cm), with constrictions between the seeds and pointed at the end.