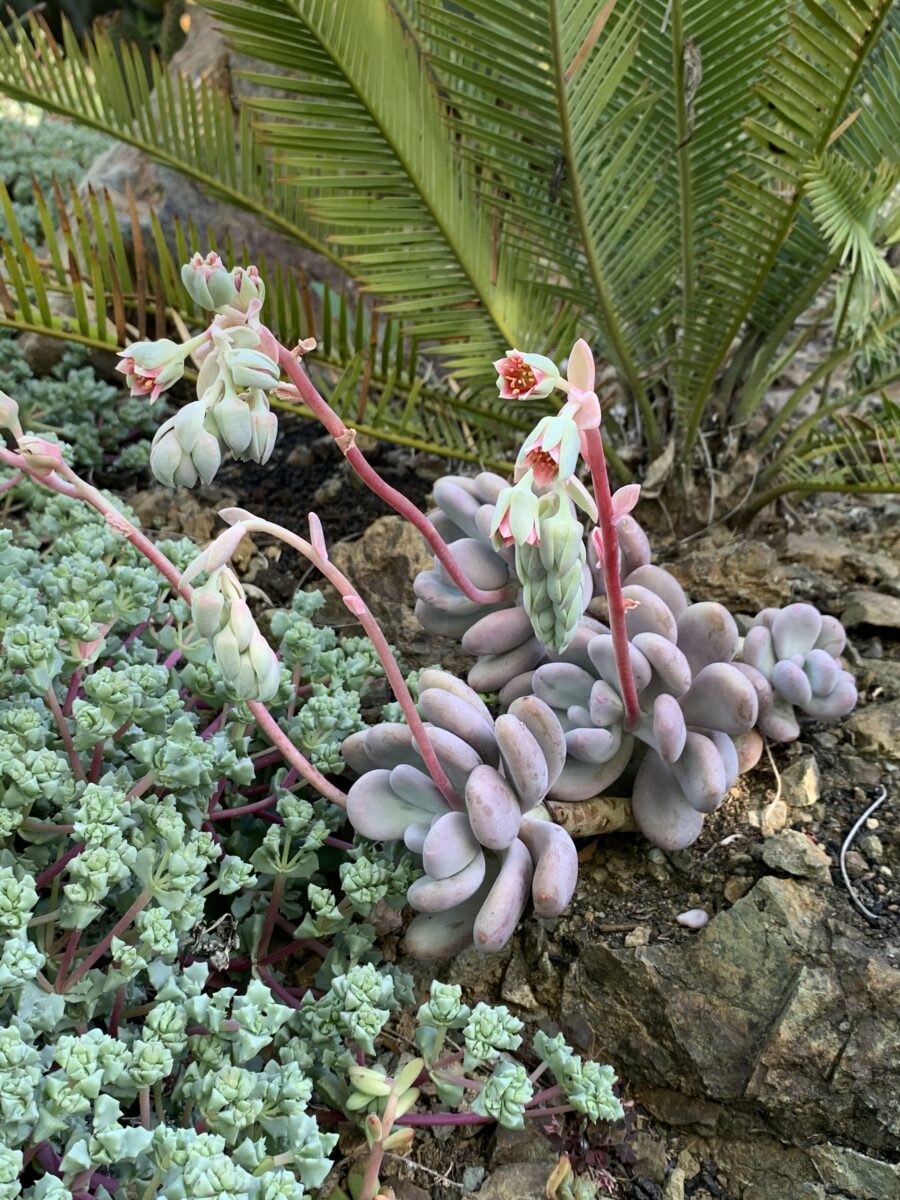 The genus Pachyphytum belongs to the Crassulaceae, or Stonecrop Family, with the various species notable for their balloon-like chubby leaves. Fifteen species are listed in the Crassulaceae volume of the Illustrated Handbook of Succulent Plants (2003), all of them native to Mexico. Though it is a much smaller genus, Pachyphytum is closely related to Echeveria, and hybrids between the two genera are not uncommon in horticulture. The first species to be described was Pachyphytum bracteosum, named in 1841. It comes from the state of Hidalgo, to the north of Mexico City in east-central Mexico.

Though plants of Pachyphytum bracteosum may be single-headed, older plants usually develop several stems by branching near the base. The stems may reach a length of as much as a foot (30 cm), and although the stems are initially erect, they often sprawl to the side or hang down as they elongate. As with other species in the genus, and a large percentage of the family as a whole, the plants are found growing on rocks, and it is for this reason that the family is referred to as the Stonecrop Family.

The leaves of P. bracteosum are oval to paddle-shaped and very thick; they range from 1.6 to 4.3 inches long (4 to 11 cm) and from 1 inch to 2 inches wide (2.5 to 5 cm), with a thickness of up to a little over half an inch (1.4 cm). In a shady position, they are pale blue-green or grayish blue-green in color, but in a sunnier spot they readily take on flushes of lavender and pink. A thin waxy coating makes them paler than they would otherwise be.

As is usual in its genus, the inflorescences of P. bracteosum are non-branching, growing upward from between the leaves of the rosettes and then nodding at the tip. At the bud stage, a flower is on the nodding part of the inflorescence and points down, but the stalk straightens little by little, and when the flower opens it is pulled upward by this progressive straightening so that it begins to point outward instead of downward. By the time a flower has withered and turned into a dry capsule, it has risen to an erect position. The lower part of the stalk is bare, and often tinged reddish. Above the bare portion are a few bract leaves, smaller than the rosette leaves, but similarly colored and fleshy. Higher up on the stalk, there are large flattened bracts, oval with blunt tips, attached at the base of each flower. When the buds are still small, these upper bracts conceal them, overlapping like shingles. As the buds develop and enlarge, they emerge from the bracts, but the five petals are still hidden by an encircling whorl of five sepals that look much like the bracts. The sepals are noticeably unequal in size, and within the cup formed by them is a second shorter cup formed by the petals. Each petal has pale margins, but is dominated by a dark red splotch that, along with the red styles and filaments, creates a dark red center to the flower that serves as a target for visiting hummingbirds. About halfway down the petals are two flaps, one extending inward from either margin, and these serve to hold back the nectar so that it does not spill out of the flower. The hummingbird’s beak can easily push the flaps apart to gain access to the nectar within.

After the flowers wither, the ovaries within swell up as the seeds develop. At maturity the capsules dry and split open to release the thousands of tiny seeds, which spill out and are easily dispersed by the wind on account of their minute size. 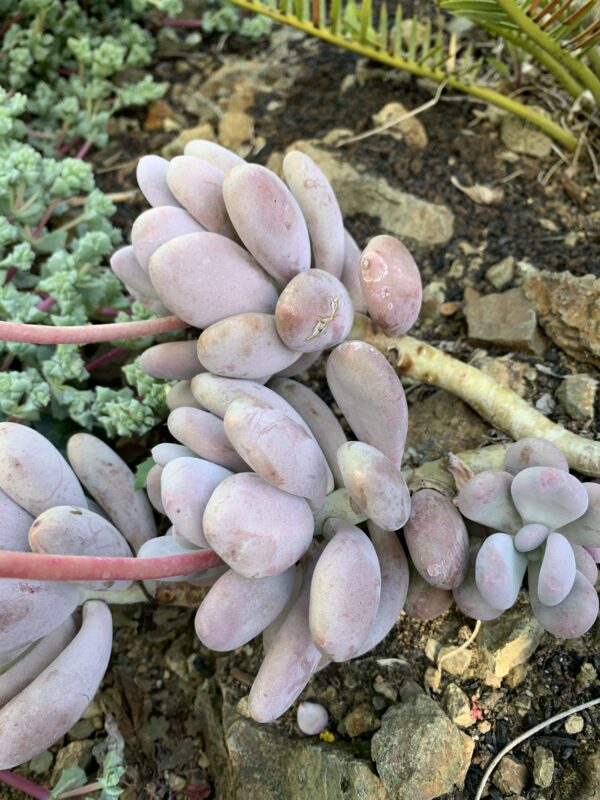 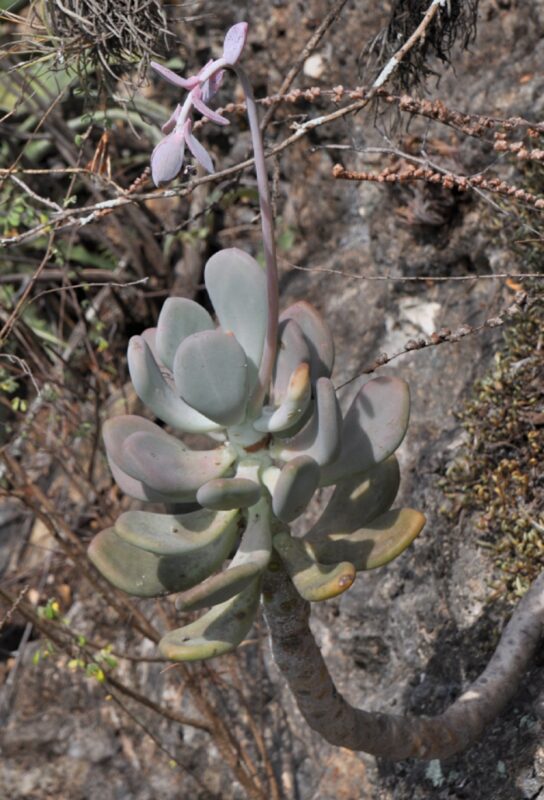 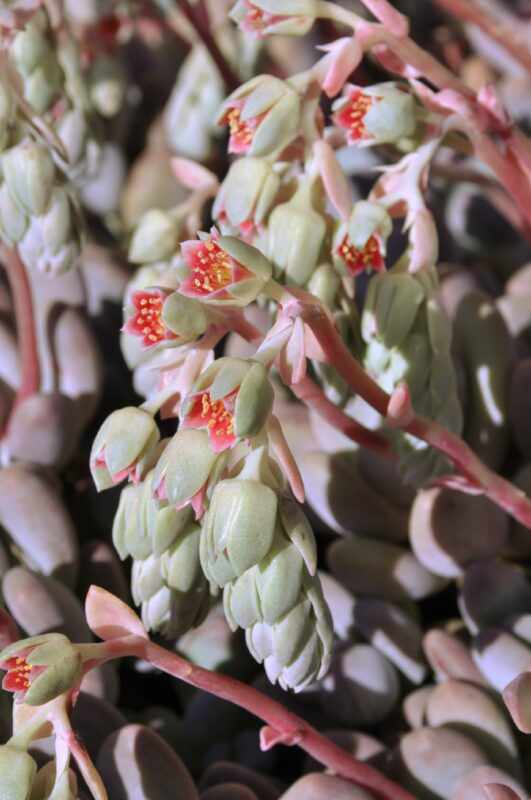