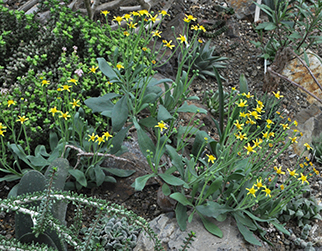 Othonna is a genus of about 100 succulent plants in the Daisy Family (Asteraceae), with the majority coming from South Africa. Many are from the western part of the country, where the rains come mostly in winter and the summers are dry. These plants are related to the larger and more widespread genus Senecio, but plants in Othonna are often pachycauls, having swollen bases that make them popular as bonsai-style potted plants. An excellent example is Othonna retrofracta, native to western South Africa and across the border into southwestern Namibia.

Othonna retrofracta is quite variable over the large area in which it occurs, with blue-green succulent leaves that may be oval or spoon-shaped, or with lobes which may be blunt or pronounced. A single plant may have some leaves which 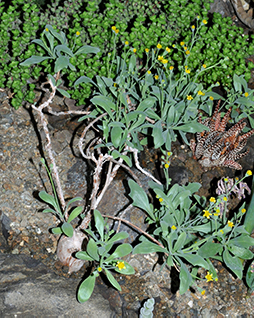 are lobed and others which are not. The leaf length varies from a little over an inch to 2½ inches (about 3 to 6 cm). Plants can grow to be as much as 16 inches tall (40 cm), with a rounded to flask-shaped fat base and slender branches. Being adapted to the dry summers of its native range, O. retrofracta loses its leaves in the summer and then re-grows them in time for the onset of the rains in the fall. The brownish or tannish base develops peeling bark which becomes more pronounced as it matures.

Late fall to winter is the flowering period for Othonna retrofracta, and our plants at the Ruth Bancroft Garden usually begin blooming in late November to December, and they finish in February or March. Like other 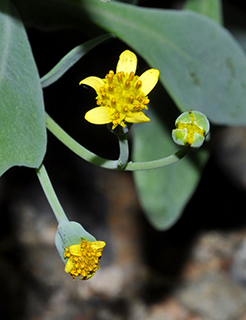 members of the Daisy Family, they have small flowers grouped in a cup-like structure called a capitulum. Around the outside of the group are female flowers called “ray florets”, each with a single long yellow lobe, giving the flower cluster its classic “daisy” appearance. The male flowers, called “disc florets”, are grouped in the middle. The number of ray florets varies according to the population from which the plants come, but our plants usually have 5, along with many disc florets.

O. retrofracta does well in the ground in Mediterranean climates where winters do not get too much below freezing, but it can be grown as a potted specimen anywhere.