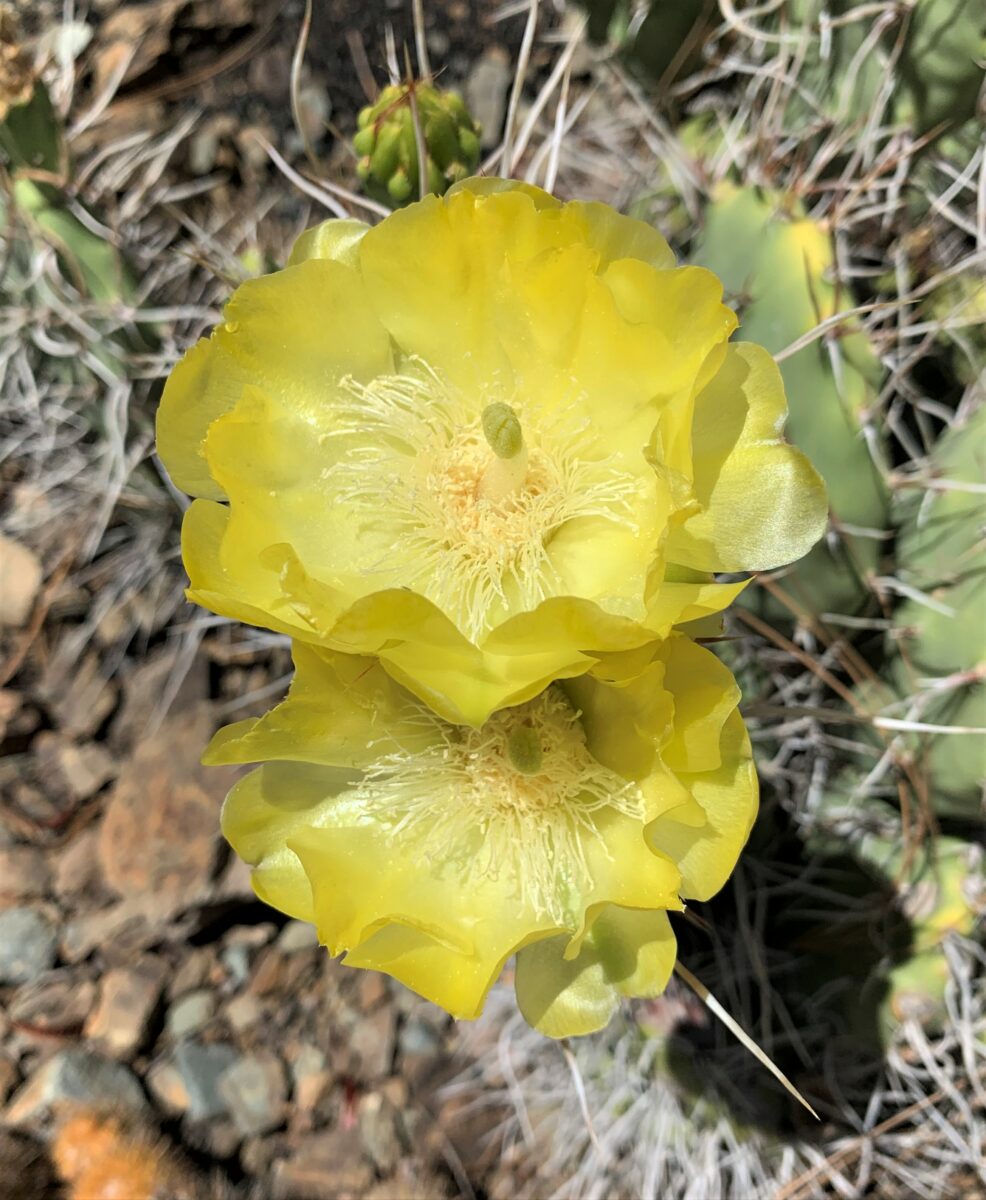 Opuntia is one of the largest groups in the entire Cactus Family, and it has the largest geographical range as well: from Canada in the north to Argentina in the south. In the United States, the genus occurs in most states, the exceptions being Alaska, Hawaii and northern New England. These plants are commonly referred to as “prickly pears”, in reference to the spiny (but juicy and edible) fruits found on some of the species. However, not all species have tasty fruits, though they may have other appealing features. A good example is Opuntia sulphurea, which is a common species in its native South America, but not often seen in U.S. gardens.

Opuntia sulphurea is widespread in central and northwestern Argentina and northward into southern Bolivia. Though it prefers relatively dry areas, it is a very adaptable species, growing in a variety of habitats from lower elevations all the way up to 11,000 feet altitude (3500 meters), and even thriving in overgrazed areas.

This cactus may eventually from a large clump up to 6½ feet across (2 m), but it never gets very tall. Different authors record its height as up to 12 inches, 16 inches or 20 inches (30 cm, 40 cm or 50 cm). Like other members of its genus, it has flattened stem segments (pads), and these may be rounded or oval and as much as 8 or 10 inches long (20 or 25 cm). The pads are quite thick (about 1.2 inches, or 3 cm), with spine-bearing areoles perched atop protuberances on the face of the pad as well as along the perimeter. Under dry conditions the pads readily become shriveled and wrinkled, lending them a distinctive appearance.

The spines of O. sulphurea are very variable, with anywhere from 2 to 9 per areole (though on some plants the lowest areoles may lack spines), and with a length varying from a little less than an inch up to 4 inches (2 to 10 cm). The spines are usually ashy-gray or white, but plants with reddish-brown spines also occur. Sometimes the newest spines have a pink or brown tinge, with their color whitening as they age. Most opuntias have straight spines, and this is often the case with O. sulphurea as well, but the species is at its most distinctive when the spines twist and curve this way and that.

Opuntia sulphurea generally flowers in the warm part of the year. In habitat in Argentina, plants in some populations may be found blooming in the spring, but the form growing at the Ruth Bancroft Garden does not produce any flowers until after the summer solstice. The flower color is yellow, often with a paler yellow center, and occasionally with a touch of orange, red or reddish-brown on the outermost petals or on the petal tips. The flower diameter is 1.8 to 2.2 inches (45 to 55 mm). The fruits are barrel-shaped and about 1.4 inches long (35 mm), with a divot on top that is left when the dried remains of the flower drop away. Though the typical form of the species has yellow fruits, plants in the northwest part of its range have red fruits. 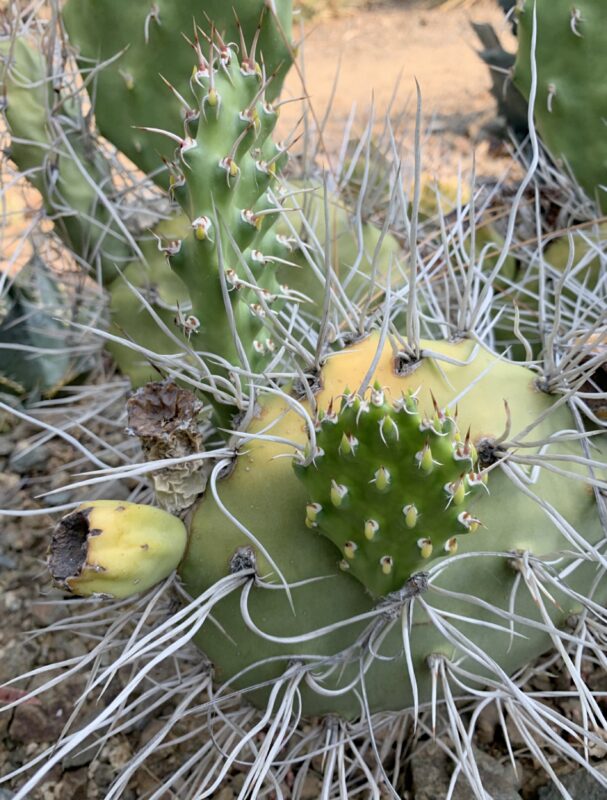 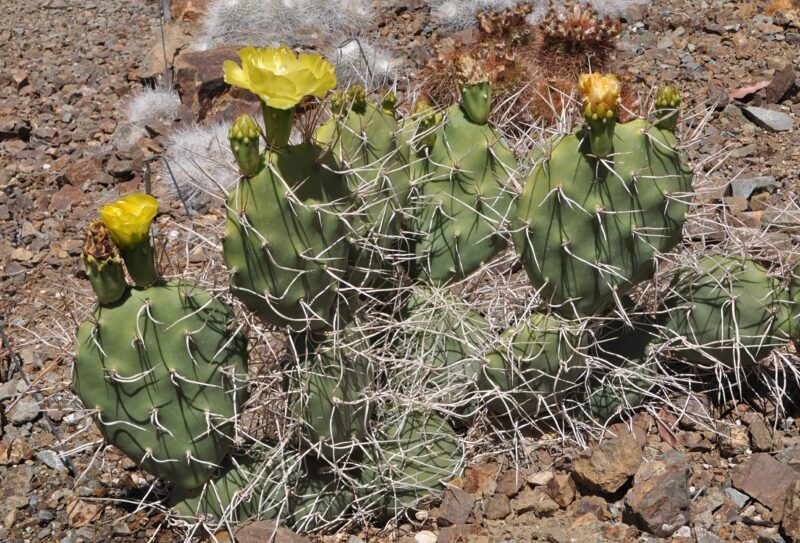 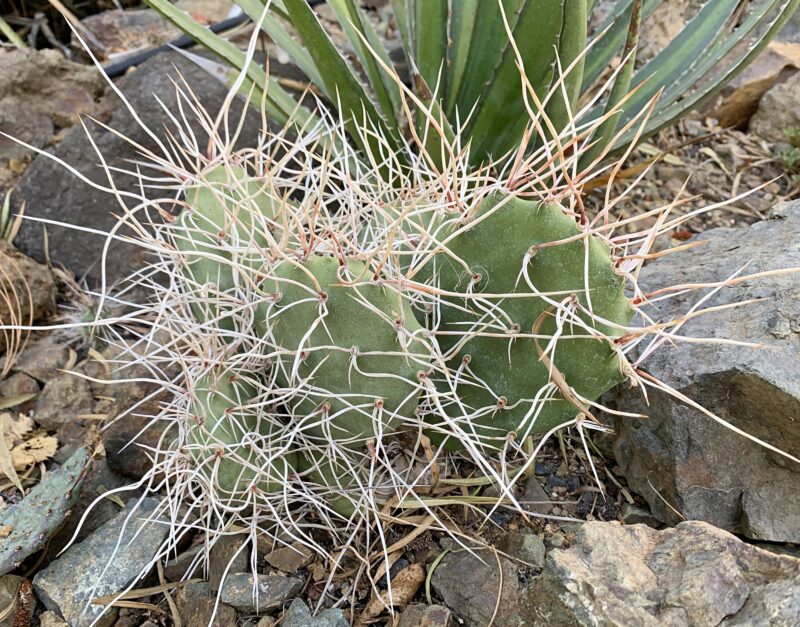