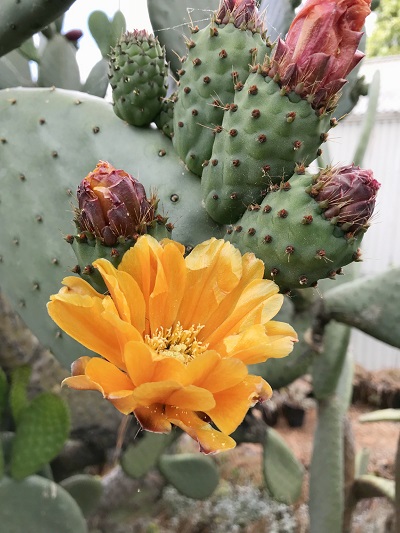 Plants in the genus Opuntia are often referred to as prickly-pears because of their large juicy fruits, which can be eaten (after removing the spines) or made into juice. Though many kinds are tasty, one species in particular is widely cultivated for fruit production, and this is Opuntia ficus-indica. The name of the species translates as “Indian fig”, and this is a reference to the consumption of the fruit by native American peoples in the areas where they grow. Though not often seen in fruit stands in the United States, prickly-pears are common in Mexican markets, where they are called tunas. The culinary usefulness of this plant does not stop with its fruit, since the tender young pads are cut up and used as a vegetable, referred to as nopales in Spanish. 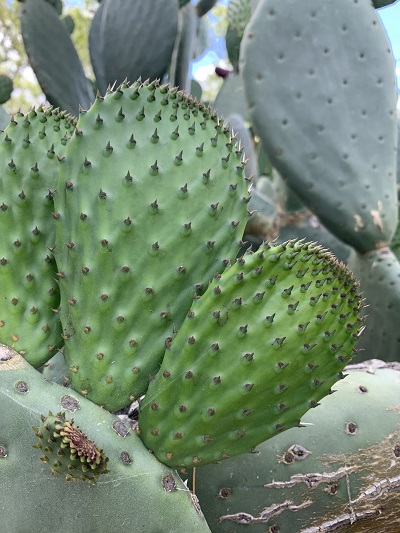 The various species of Opuntia come in a wide range of sizes, from ground-hugging miniatures to tree-like, and although Opuntia ficus-indica is not the largest of the species, it is certainly on the big side. A mature plant may grow to a height of as much as 20 feet (6 m), but more commonly it is more in the 8- to 10-foot range (2.4 to 3 m). The base of an old plant becomes woody and brown and trunk-like, but it grows out in all directions and branches low-down, so the overall appearance is of a shrubby mass of green pads, each of which has an oval shape like a tennis racket. These pads are often mistaken for leaves because they are green and flattened, but actually they are stem-segments. In O. ficus-indica they are anywhere from 8 to 24 inches long (20 to 60 cm) and 4 to 10 inches wide (10 to 25 cm). When new pads first sprout, they have tiny cylindrical leaves, but these are soon shed, leaving the green stem to do the work of photosynthesis. Each pad is dotted with areoles, which are the growth-points of a cactus, and it is from these points that spines and flowers and new shoots emerge. 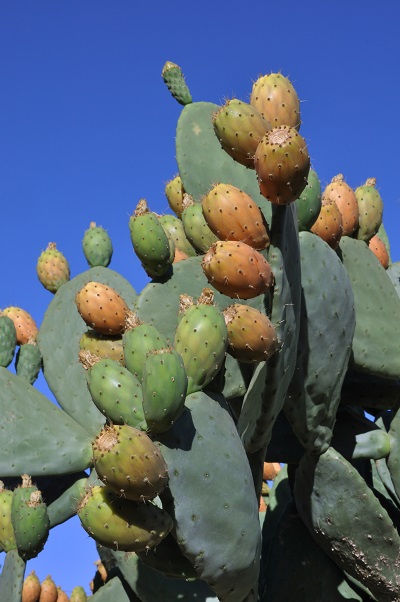 Spines on opuntias come in two types: needle-like conspicuous spines and tiny, barbed, easily detached spines called glochids. Some opuntias are referred to as “spineless”, but this means only that they do not have the conspicuous spines, and the glochids are still present. Because Opuntia ficus-indica has been grown for thousands of years, over time people have selected less-spiny forms to cultivate, so plants without conspicuous spines are frequently seen, but they should still be approached carefully to avoid coming away with hundreds of tiny detached glochids. These are not dangerous, but they are certainly annoying and hard to get rid of.

Opuntia ficus-indica is spring-flowering, but it may put out a few flowers here and there later in the year as well. The flowers are 2 to 2¾ inches in diameter (5 to 7 cm) and are normally orange or yellow-orange in color, though they may be red as well. The flower base is like a little green barrel punctuated with slightly raised areoles, and these have glochids (and sometimes longer spines) just like the ones on the pads. After the flower has dried up, the base enlarges over the ensuing months until it matures in autumn, and at this point it colors up. Spiny plants in the wild come in a wide range of fruit colors (red, pink, orange, yellow and green), but the less-spiny cultivated forms are usually either yellow, pinkish-red or orange. While spiny plants have fruits up to 3 inches long (7.5 cm), cultivated plants have undergone selection for large fruit size, and may be up to 4 inches long (10 cm). 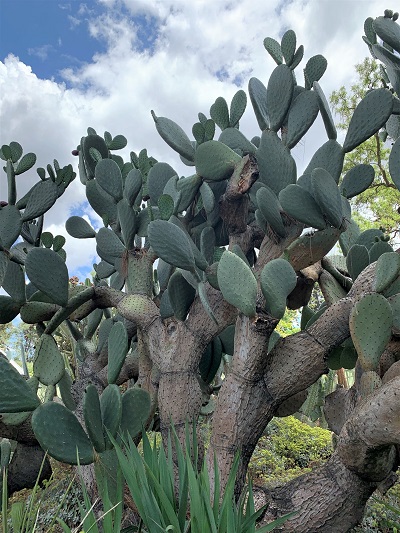 Because O. ficus-indica has been cultivated and widely distributed for centuries, it is not certain where exactly it comes from, but it is especially abundant in south-central Mexico, and this may be its place of origin. Plants in colder areas to the north, such as northern Mexico and the southwestern United States, will grow happily in cultivation where winters are mild, but they do not spontaneously re-seed and establish themselves. They are commonly grown by rooting pads rather than from seed. This species will survive brief winter lows of 20° F or even a little colder, but it will not withstand extended hard freezes.