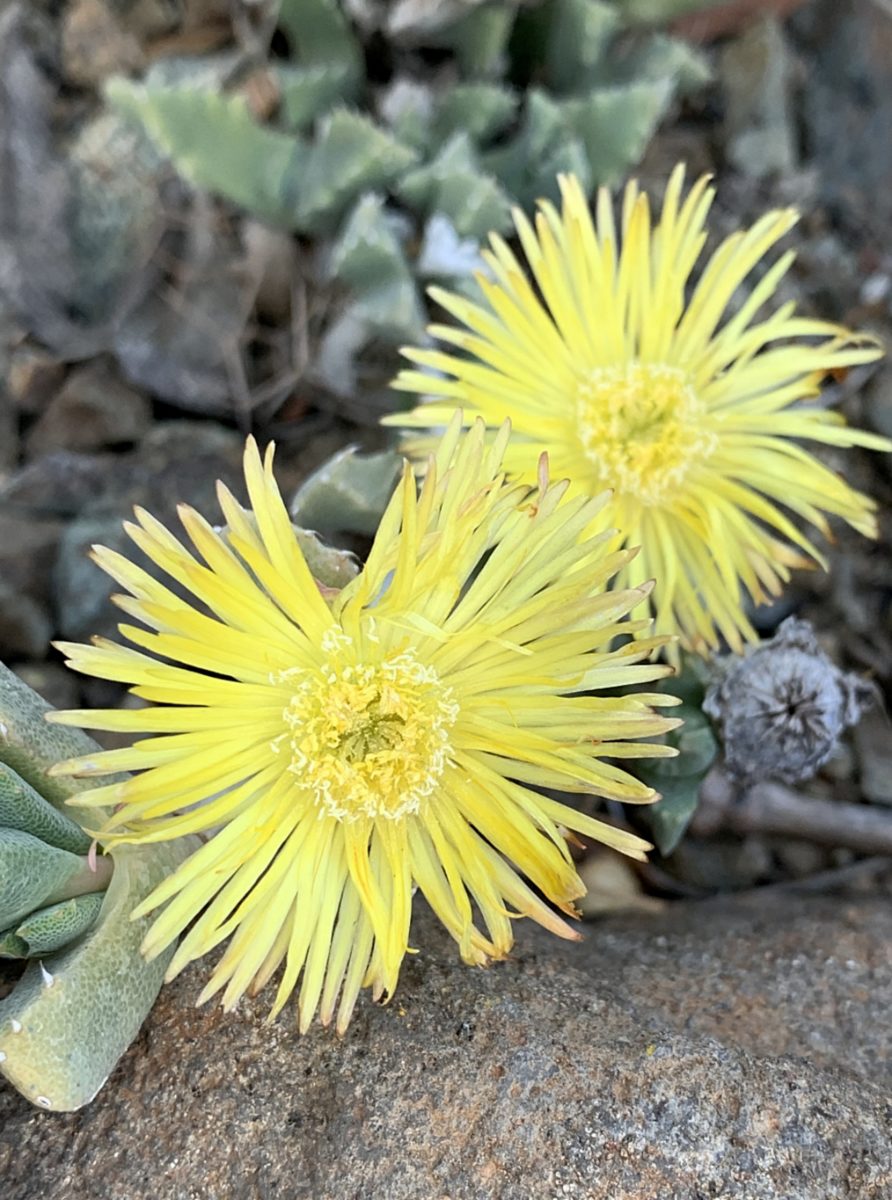 The genus Odontophorus is a small one, with 4 or 5 species (plus an additional subspecies) native to the northwestern corner of South Africa. These plants belong to the family Aizoaceae, also known as the Ice Plant Family, one of the most species-rich groups of succulents in the world. While some genera in the family have many species and are widely grown, like Lithops or Lampranthus, others such as Odontophorus are seldom seen in cultivation.

While the other species in Odontophorus form tight clusters of heads, O. marlothii develops long woody branches which extend out from plant in various directions, often using neighoring shrubs for support, or trailing along the ground if no such support is available. Flowers appear mainly on these extended branches, rather than at the middle of the plant. The stems of new shoots are reddish, but they become gray and woody as they age. The stem diameter is about a tenth of an inch (2.5 mm) or less. On the branches extending out from the middle of the plant, the leaves are widely spaced, so that the stem is very visible, but at the middle of the plant is a cluster of short stems which are hidden by their leaves.

The leaves of O. marlothii are soft rather than rigid, and they come in pairs, jutting out like little gray-green tugboats on either side of the stem, but conjoined at their bases and clasping the stem. Each leaf is about 1 to 1.4 inches long (25 – 35 mm), and a little less than a third of an inch wide (7 to 8 mm). The upper surface is flattened, while the lower surface is humped and keeled toward the tip. The leaf margins and the keel are adorned with tiny teeth, sometimes sticking straight out and sometimes curving to one side. The leaf surface is covered with tiny rounded bumps, or tubercles, and atop these are minute bristles which make the leaves rough to the touch.

The flowering time for Odontophorus marlothii is late fall to winter, with the first flowers usually emerging at the Ruth Bancroft Garden in November, and the peak flowering in late December and January. It should be noted that the plant’s native habitat is in the Southern Hemisphere, where the flowering would be at the opposite time of the year. At the bud stage, the flowers are clasped by five fleshy sepals, each with a keel running down its back and ending in a tiny beak-like tip. The fragrant flowers are bright yellow and about 1.2 inches across (3 cm), opening in the middle of the day and closing in the evening.

The rounded fruits of O. marlothii are initially reddish, and surrounded by the drying sepals. On the domed top are slits corresponding to the locules (the chambers which hold the seeds). Usually there are ten locules, but occasionally a capsule may have more or less than this. As a fruit ages, it becomes gray, and at this stage it is ready to open in response to rainfall, displaying the beautiful symmetry of its construction and allowing raindrops to splash out the small pale-brown pear-shaped seeds. 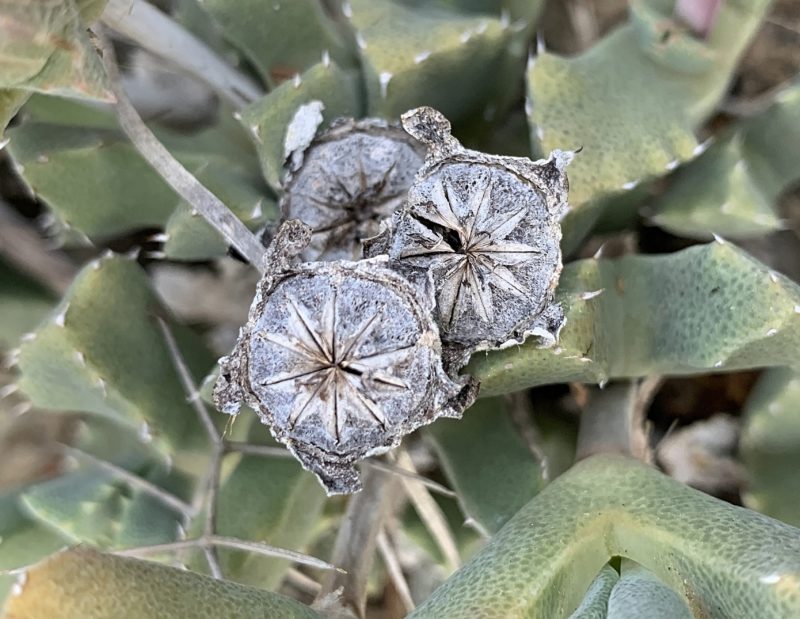 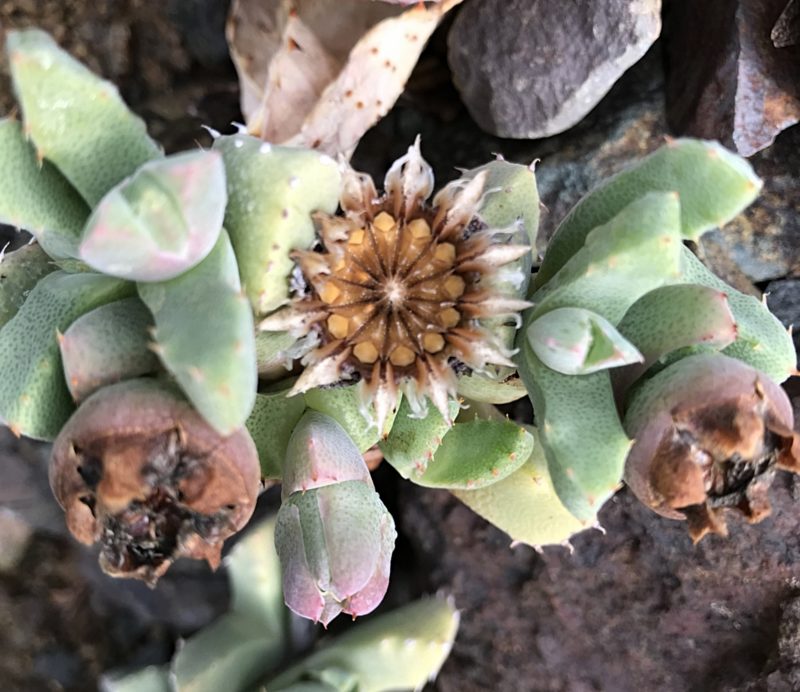 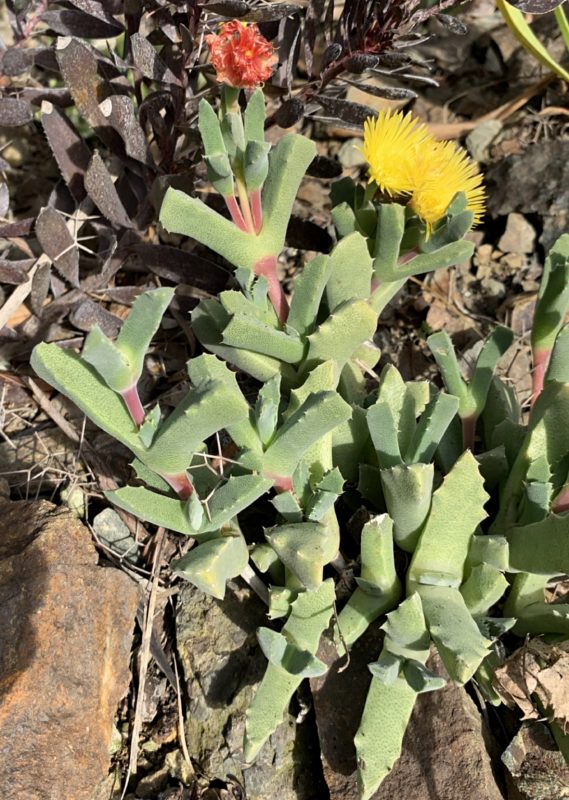 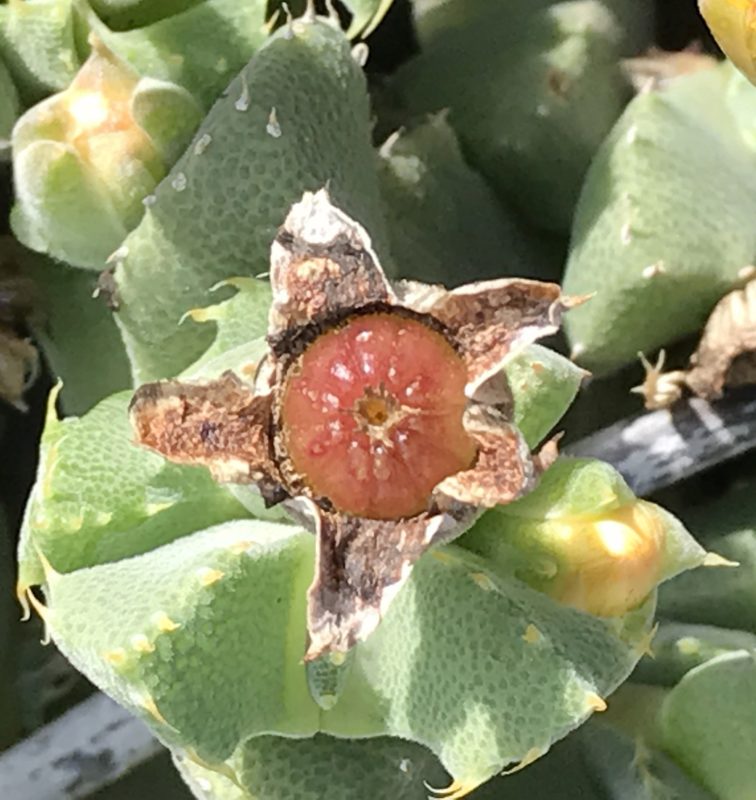