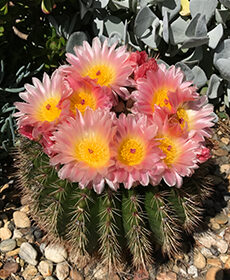 Because cactus taxonomy has been in flux in recent years, it is often difficult to decide what name to use. The plant featured in this highlight was first named Notocactus roseoluteus, but was then put into the genus Parodia (along with all the other Notocactus species) and treated as a synonym of Parodia mammulosa. Now the genus Notocactus has been brought back, and N. roseoluteus has been re-named as a subspecies of Notocactus herteri. Part of the problem here is that the plant is in many respects intermediate between the deep pink-flowering N. herteri and the normally yellow-flowering N. mammulosus, and experts have disagreed on which one it actually belongs with, or if it should be considered as a species in its own right. For now, we will go along with the latest classification which treats it as a subspecies of Notocactus herteri. 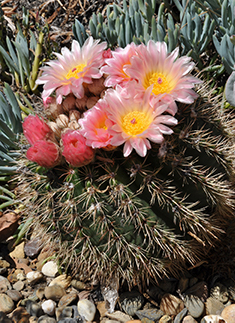 Notocactus herteri ssp. roseoluteus comes from a small area in northern Uruguay, near the border with Brazil. It is a deep green solitary globular plant, reaching a diameter of about 7 inches, with 15 to 20 vertical ridges running down its sides. Atop each ridge, or “rib”, are tufts of short stiff brown spines at short intervals.

Notocactus herteri ssp. roseoluteus flowers in late spring, beginning at the Ruth Bancroft in April or May, and ending in June. Like many species of cactus, it has several bursts of flowers at intervals during its blooming season, with the first burst typically the most intense. Although each individual flower only lasts for 2 or 3 days, a mature plant produces dozens of them each year. The flowers are about 3 inches (8 cm) across, and the petals are pink for most of their length, giving way to yellow at their bases. In the middle is a tuft of bright yellow pollen-bearing stamens surrounding the pink stigma. The small fruits which follow bear many small black seeds. 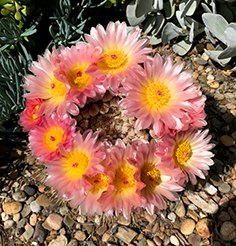 This species is easy to grow, and can withstand temperatures down to at least 25° F (-4° C). Plants are self-fertile, so it is not necessary to have two in order to get viable seed.