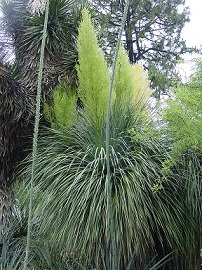 The Nolinaceae is a small family of monocots native to North America, especially the southwestern U.S. and Mexico.  The family takes its name from the genus Nolina, which occurs both in the U.S. and in Mexico.  Some species resemble bunches of grass, and are commonly called “bear grass”, but others are of larger stature and develop trunks.  One of these is Nolina matapensis, which is found in the mountains along the border between the states of Sonora and Chihuahua in northwestern Mexico.

Though it was named in 1940, Nolina matapensis was not found 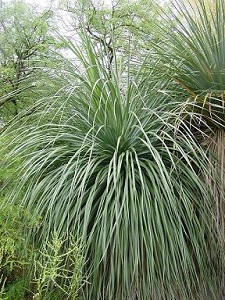 in cultivation until its introduction by the International Succulent Institute in 1976.  Our plant at the Ruth Bancroft Garden dates from that year, and has grown into an impressive specimen 11 feet tall, with large heads of arching narrow blue-green leaves.  The species description gives a leaf length of up to 4 feet (1.2 m), but our plant has grown larger, with 6-foot leaves (almost 2 m).  Although our plant does not flower every year, it has produced 4 inflorescences this year.

Like other nolinas, Nolina matapensis has separate male and female plants, with branched inflorescences bearing many tiny flowers. 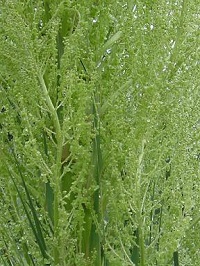