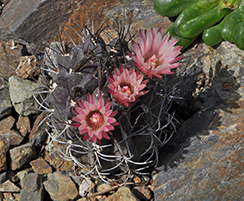 As with so much in cactus taxonomy, there is a dispute regarding the correct classification for this plant. It was first described as Pyrrhocactus crispus in 1959, and then was moved into Neoporteria as Neoporteria crispa. In 1994, Fred Kattermann proposed including all of the species in Neoporteria under an expanded concept of Eriosyce, so it became Eriosyce crispa, and this classification was followed in The New Cactus Lexicon, published in 2006. More recent DNA evidence has lent some support to retaining Neoporteria as a separate genus, and this is followed in Taxonomy of the Cactaceae, published in 2015. 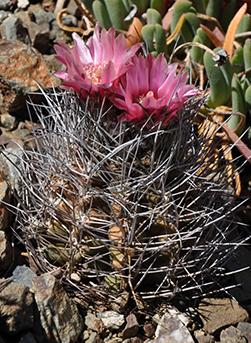 Neoporteria crispa is normally a solitary plant about 2 to 4 inches (5 – 10 cm) in diameter, with 10 to 16 lumpy ribs and numerous curving spines. In more densely-spined individuals, the spines are interlaced and form a protective mesh around the plant. The young spines are black, but they turn gray as they age. The plant body is purplish-black in color, and it is interesting that this unusual coloration is found in numerous species native to northern Chile.

The pink funnel-shaped flowers of Neoporteria crispa are about 1½ to 2 inches across (3.5 – 5 cm). The petals toward the outside of the flower tend to be 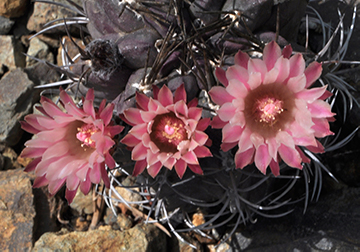 deeper in color than those toward the middle, and each individual petal is darkest at the center and paler at the edges. At the Ruth Bancroft Garden, this species flowers in late May and June.

Neoporteria crispa is found in nature in Huasco Province, Chile, near the city of Vallenar. This is about 550 km (340 miles) north of Santiago.