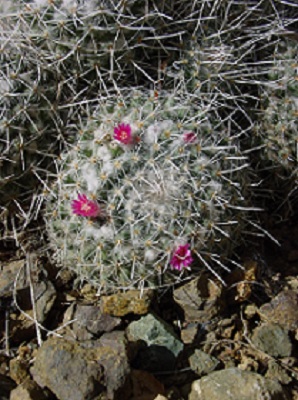 Mammillaria is one of the largest genera in the Cactus Family (Cactaceae), with hundreds of species, most of which are native to Mexico.  A few range northward into the southwestern U.S., and some others are found in Central America or around the Caribbean.  Mostly they are relatively small globular-bodied plants, though some may elongate to become short columns.  Although some kinds remain single-headed, many of them form many-headed clusters in time.  One of these clustering ones is Mammillaria geminispina, which has grown happily at the Ruth Bancroft Garden for many years.

Mammillaria geminispina comes from east-central Mexico. occurring in several states over a distance of perhaps 250 miles (400 km).  Like other members of its genus, its body consists of many little tubercles (like tiny “hills”), with the spine-producing areoles atop each one.  Though the plant is green, the profusion of white spines (up to 20 or so per areole), along with the wooly white hairs between the tubercles, give the whole plant a white appearance.  Most of the 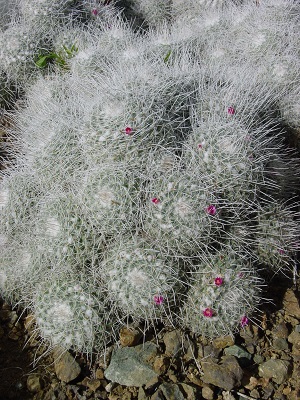 spines in each cluster are short, averaging about ¼ inch long (6 mm), but there are typically two central ones which grow much longer, up to an inch and a half or more (40 mm).  This pair of long spines is what gives the plant its name:  “geminispina” means “twin-spined”.  Each head in the cluster is up to 3½ inches across (9 cm), but over time the cluster may reach several feet in diameter.

Autumn is not the most common time of year for cacti to flower, but Mammillaria geminispina consistently comes into bloom at this time of year at the Ruth Bancroft Garden, commencing in about September and ending about November.  Each flower is quite small, about ¼ inch wide (6 mm), but their magenta to deep pink color makes them look jewel-like nestled amidst the white wool.  The flowers emerge towards the top of the head, but not at the tip.  Some species of Mammillaria produce a ring of flowers circling the growing tip, but M. geminispina seldom has more than a handful of flowers open on a given stem at any one time.