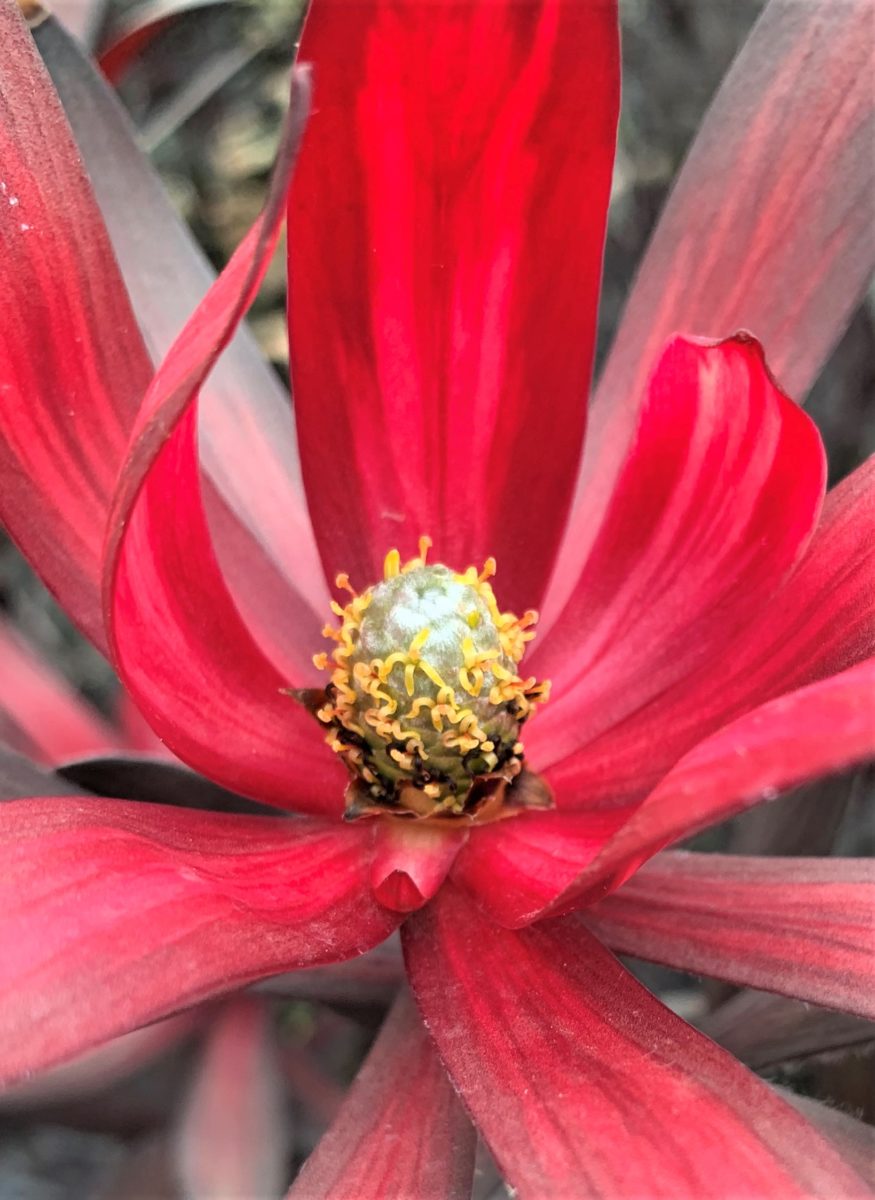 Though some plants in Leucadendron are trees, most are shrubs. They have small cone-like clusters of tiny flowers, produced at the ends of the branches. Just below the flower heads are modified leaves called bract leaves, and these are often brightly colored, contrasting with the normal leaves lower down on the branch. In some cases, the bract leaves radiate outward, but in other cases they are held upright so that they enclose the flower head. From a distance, one can tell that the plant is in flower because of the bracts, but the flower heads are somewhat obscured by these, as is the case with ‘Ebony’.

Leucadendron ‘Ebony’ is a dense shrub which reaches a height of 5 to 6 feet at maturity (1.5 to 1.8 m). The foliage color is dark blackish-purple, with the bracts at flowering time turning the branch tips fiery red. The oblanceolate* leaves are smooth and quite variable in size (even on the same bush), with the largest ones about 3 inches long (7.6 cm) and ⅝ inch wide (1.6 cm). The leaf edge has a fringe of minute white hairs, but this is visible only on close inspection. ‘Ebony’ originated as a sport off another cultivar named Leucadendron ‘Safari Sunset’, itself a hybrid between Leucadendron laureolum and L. salignim. The sport immediately called attention to itself because of its exceptionally dark foliage, and it was patented in December 2012.

This plant comes into flower in winter (in late January at the Ruth Bancroft Garden). Plants in the genus are dioecious, meaning that there are separate male and female plants, and a given cultivar is all one or the other, since they are propagated from cuttings in order to maintain uniformity. ‘Ebony’ is female, and although some sources list the flower color as red, this refers to the floral bracts rather than to the flowers themselves. The small flower head, egg-shaped and nested within the bracts, is off-white and yellow, with the individual flowers being minute.

Leucadendron ‘Ebony’ makes a striking garden plant, contrasting well with other plants due to its dark color. It looks terrific alongside blue-gray agaves or other plants with pallid foliage. Many plants in the Proteaceae prefer excellent drainage and acidic soil conditions, but ‘Ebony’ seems to be less demanding than most of its relatives. As a precaution, fertilizers containing phosphorus should be avoided, since many Proteaceae have a low tolerance for this nutrient. ‘Ebony’ can withstand temperatures down to about 20° F (-7° C).

*The term “oblanceolate” refers to leaves shaped like the head of a lance, but with the widest part toward the tip rather than toward the base. 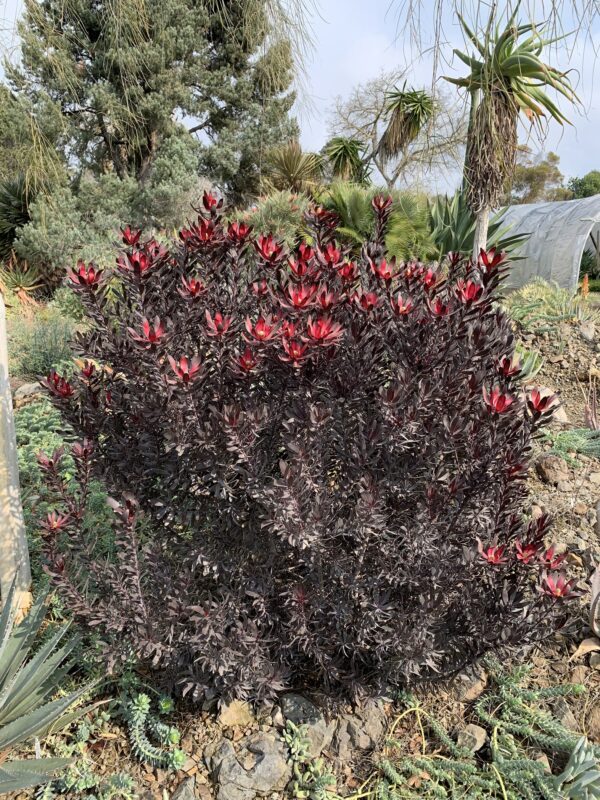