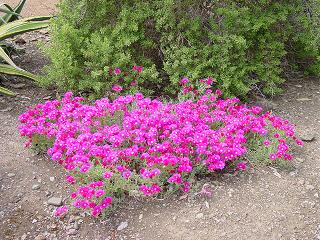 The ice plant family, Aizoaceae, contains a large and diverse assemblage of succulent plants, many of which have very showy flowers.  The older name Mesembryanthemaceae  is often used for these plants, and this is shortened to “mesembs”.  The great majority are found in southern Africa, and they range from bushes to creeping ground-covers to tufts or clumps to a single pair of fused leaves.  Among the spreading types used as ground-covers, one of the better-known genera is Lampranthus, of which the Lampranthus spectabilis is a part of.

Lampranthus spectabilis makes a brilliant display in spring, covering itself in flowers which are about 2 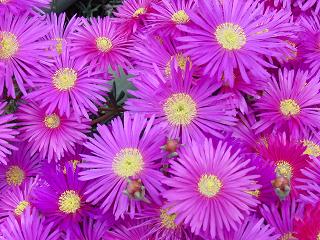 inches (5 cm) across.  With their ring of narrow petals, the flowers bear a superficial resemblance to some members of the daisy family, but they are not at all closely related.  The color range in Lampranthus spectabilis  varies from pink to red to magenta to purple, offset by the pale yellow of the pollen at the center.

The wiry stems of Lampranthus spectabilis  spread out horizontally, bearing small blue-green finger-like leaves which can be up to 3 inches (8 cm) in length, but are often much shorter.  Plants spread vigorously to create an attractive carpet, but the stems can easily be clipped if they go too far in a given direction.  In time, a patch may become thin in spots where branches have died back after putting all their energy into flowers, so it may be desirable to start new plants from cuttings, which root easily.  Lampranthus spectabilis  thrives in coastal or inland gardens, as long as good drainage is provided.