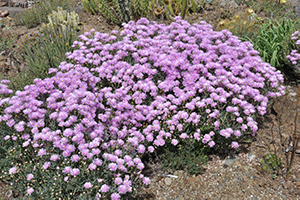 Some plants flower so profusely that a cloak of brilliant blossoms covers the plant completely. An example is Lampranthus multiradiatus, often called Lampranthus roseus, which is now considered a synonym. This member of the Ice Plant Family (Aizoaceae) is native to the southwestern part of South Africa, near Cape Town. The flowers of L. multiradiatus are light pink to rose-pink or lavender-pink in color and 1½ to 1¾ inches across (3.8 to 4.5 cm). At the Ruth Bancroft Garden its peak of flowering is in April, though it often begins in late March. 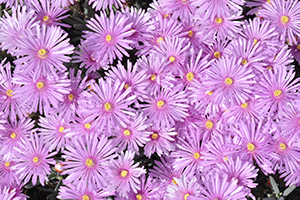 The blue-green finger-like leaves of Lampranthus multiradiatus are up to 1½ inches long (3.8 cm) and closely resemble those of its relative Lampranthus spectabilis, which is more commonly grown in California. However, the latter has a more prostrate growth habit, while L. multiradiatus has a mounding or shrubby habit. L. multiradiatus is listed as having a height of up to 20 inches (50 cm), but our plants at the Ruth Bancroft Garden grow considerably taller than this, up to 4 feet (120 cm). Also, the flower color of Lampranthus spectabilis is most often in the magenta to purple range, though pink forms exist as well.

Lampranthus multiradiatus is a fast grower and presents no difficulties in cultivation in our area, as long as it gets plenty of sun and good drainage. In time, however, it may accumulate dead branches and begin to look scraggly. For this reason, it is a good idea to start new plants from cuttings every few years in order to keep it looking its best.