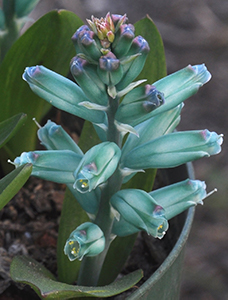 South Africa is renowned for its bulb diversity, with more species than any other place on earth. One notable group of small bulbs is the wonderfully diverse genus Lachenalia, mostly found in the country’s west where a Mediterranean climate prevails. This is a large group, with 133 species recognized in Graham Duncan’s 2012 monograph. Once placed in the Lily Family, Lachenalia was moved to the family Hyacinthaceae when the enormous Lily Family was cut up into smaller and more cohesive groups. Recent classifications have moved the Hyacinthaceae into the Asparagus Family (Asparagaceae).

Within its genus, Lachenalia viridiflora stands out due to the extraordinary blue-green color of its flowers. Its strap-like leaves are t 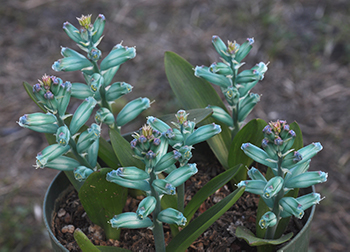 ypically bright green and smooth, without the spots or stripes or bumps found on many Lachenalia species. However, plants of L. viridiflora can sometimes have spots, and occasionally also dome-like bumps, or pustules. The leaves are 2 to 4 inches long (5 to 10 cm), with the flower spike rising to as much as 6 inches (15 cm), though sometimes the spike does not overtop the leaves. The turquoise flowers are tubular to blimp-shaped, sometimes with a little bit of darker blue or purple at the tip, especially at the bud stage.

Like most other species in its genus, L. viridiflora is a winter-grower, and its leaves wither and disappear during the summer months. It is a relatively early-flowering species, coming into bloom in late fall to early winter, peaking in June in its Southern Hemisphere home and in November to December in cultivation in California. 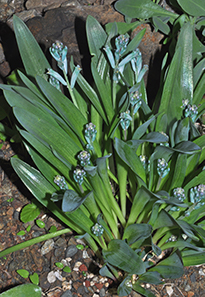 Lachenalia viridiflora is not a widespread species, occurring in a limited area near St. Helena Bay on
South Africa’s west coast, about 135 km (84 miles) north of Cape Town. It is not difficult to grow, especially in areas with a Mediterranean climate, but it should be allowed to remain dry during the summer.