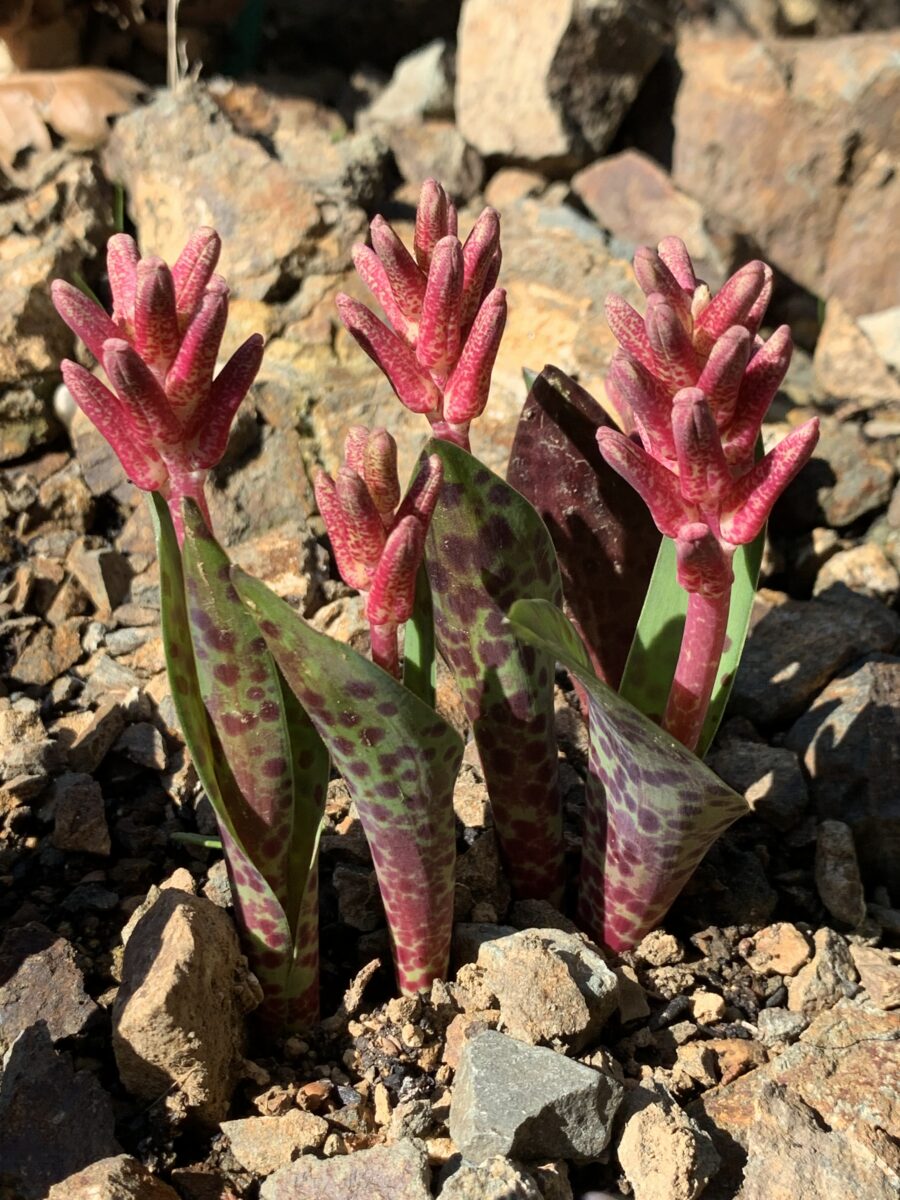 South Africa is home to an unusually large number of bulbs, but many of these are not as well-known in California as the ones that come from countries around the Mediterranean (tulips, hyacinths, daffodils, etc.). Since many of South Africa’s bulbs originate in the western part of the country, where the rains come in winter as they do in California, they have great potential for our area and deserve to be cultivated more widely. The genus Lachenalia is a fine example.

Lachenalia is a large genus, with 133 species recognized in the 2012 monograph of the genus by Graham Duncan. Most of these are found in the winter-rainfall area in western South Africa, though some species occur to the north in neighboring Namibia, and some others are found farther east, primarily along South Africa’s southern coast, where rainfall occurs in both winter and summer.

All Lachenalia species have non-branching spires of flowers, and often the flowers are relatively short. However, a few species have longer tubular flowers adapted for pollination by sunbirds, which probe the floral tube with their long beaks to extract the nectar within. One such species is Lachenalia punctata, with a large area of occurrence in the southwestern part of South Africa, mostly relatively near to the coast.

As is usual in the genus, Lachenalia punctata is dormant during the summer months. Its leaves emerge in autumn along with the flowers, with the blooming coming earlier than with other species. At the Ruth Bancroft Garden, L. punctata typically flowers in November and December, while the peak flowering in its South African home would be in May (autumn in the Southern Hemisphere).  L. punctata bulbs produce offsets to form a cluster, with the size of the cluster varying from a few bulbs to dozens. Each bulb produces two strap-like leaves a year, with a slight widening above the middle and a pointed tip. The leaf length is up to 5½ inches (140 mm). The leaves may be spreading or more or less upright, and they usually have dark purple spots on one or both surfaces, though unspotted plants also occur.

Like all species of Lachenalia, L. punctata has a non-branching flower stalk, with the number of flowers on a stalk ranging from a few to two dozen or more. The stalk is up to almost 10 inches tall (250 mm), but it is ofen shorter than this. As with many monocots, Lachenalia flowers do not have leafy sepals on the outside and colored petals within; instead the perianth has 6 colored segments, and it is difficult to say if these are 6 petals, or 3 petal-like sepals together with 3 petals. In such cases where there is not a clear distiction between sepals and petals, the neutral term “tepals” is used. Thus, we would say that the Lachenalia punctata flower has 3 outer tepals and 3 inner tepals, with the outer ones a little shorter than the inner ones. The length of the tubular flowers varies from .9 inch to 1.3 inches (23 to 33 mm), with a short pedicel at the base connecting it to the stalk. The flowers look red or pinkish-red from a distance, but up close it can be seen that they are densely red-spotted against a pale yellow background; the name punctata means spotted, and refers to this. The species was long known as Lachenalia rubida (for the ruby-red color of the flowers), until it was shown that the name punctata had been published earlier, and thus is the correct name.

If successfully pollinated, L. punctata produces small oval papery capsules, with round black seeds within. After the flowers are finished, the flower stalk bends to the side, so that the capsules are close to the ground. Seed sowing is best done in the fall of the year following the flowering, and plants often reach flowering size in 3 years. 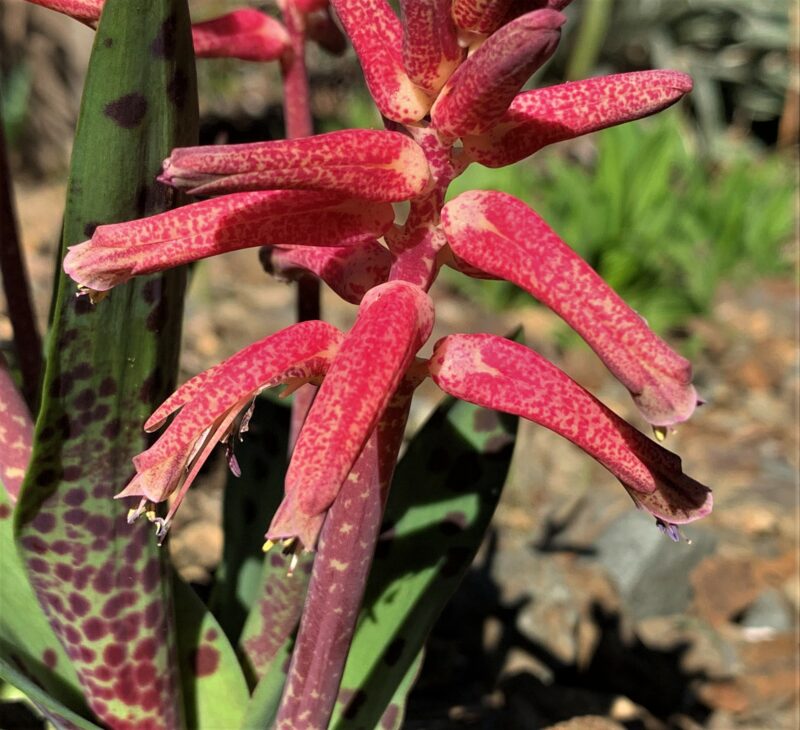 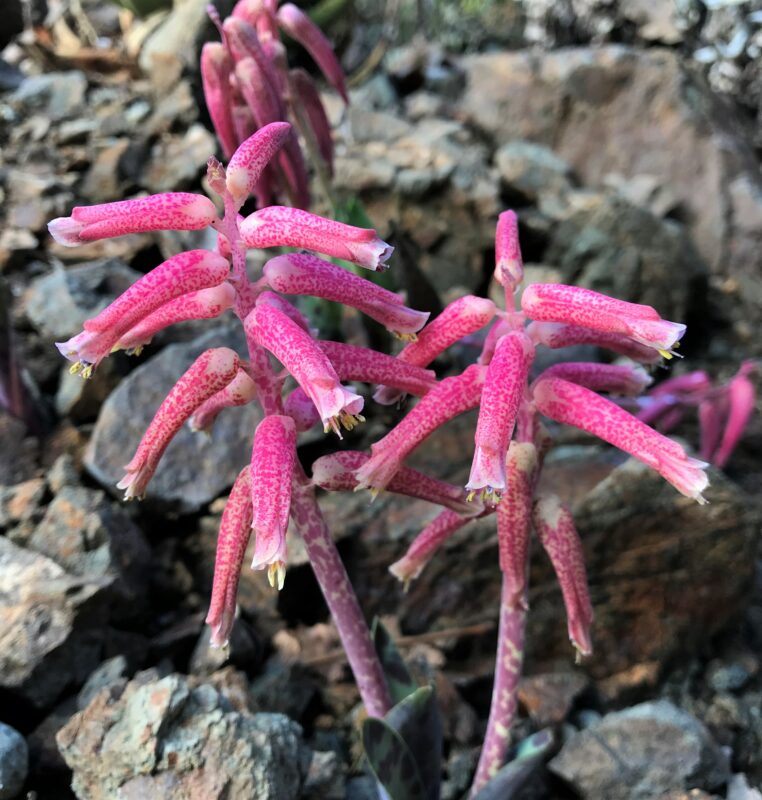 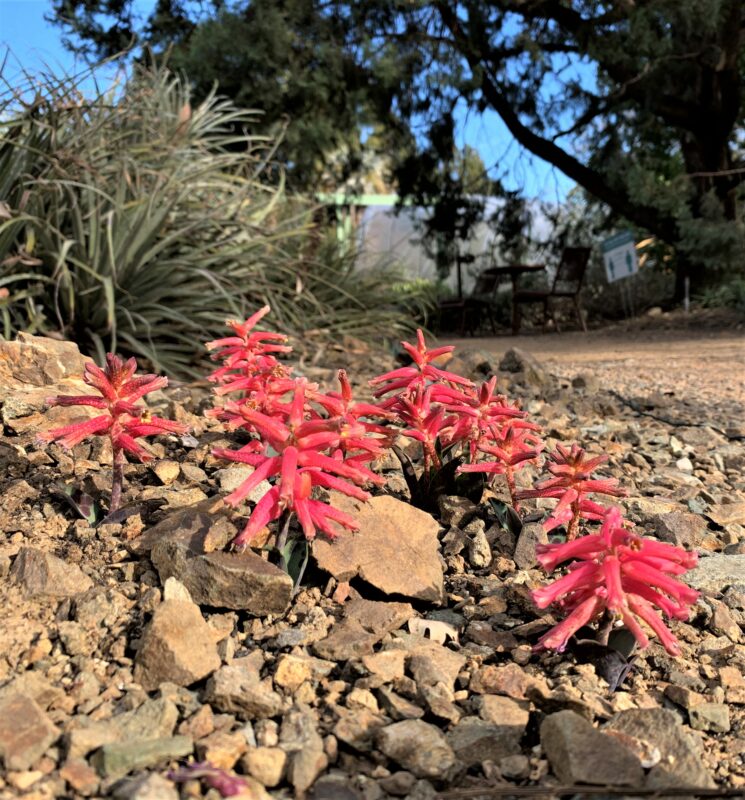