Stapeliads are succulent relatives of the milkweeds with striking 5-pointed flowers. Their flowers are beautiful, but in most cases they emit foul odors in order to attract flies which pollinate them. Though long placed in the Milkweed Family (Asclepiadaceae), they and their milkweed cousins have now been merged into the Apocynaceae, or Dogbane Family. Their seed pods show that all these plants are related, with twin follicles protruding like a pair of horns and eventually splitting open to release the seeds.

Huernia is one of the largest genera among the stapeliads, with 68 species listed in John Pilbeam’s book Stapeliads (2010), along with a number of subspecies and varieties. The various species are found over a wide area, from the Arabian Peninsula in the north down to South Africa. 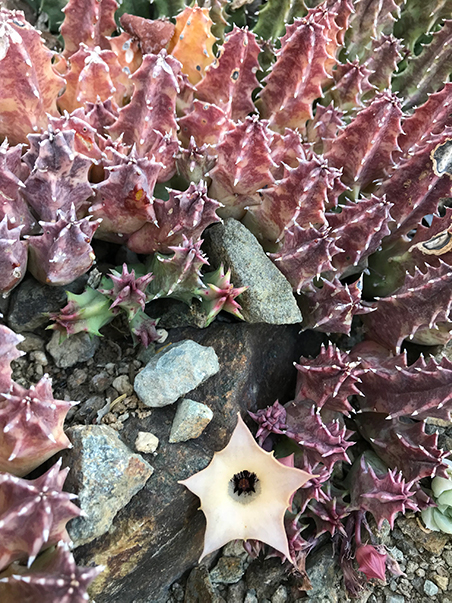 Among the species at the south end of this area is South Africa’s Huernia thuretii var. primulina, native to the south-central part of the country in the Eastern Cape Province.

Huernia thuretii var. primulina grows as a cluster of small 4- or 5-sided stems, each about .4 to .5 inches in diameter (10-12 mm) and up to a little over 3 inches long (8 cm). The ridges between the stem sides have a saw-toothed outline, though the “teeth” are not at all sharp. Plants in shadier spots are green in color, but with more sunlight they become tinged with purple and pink. 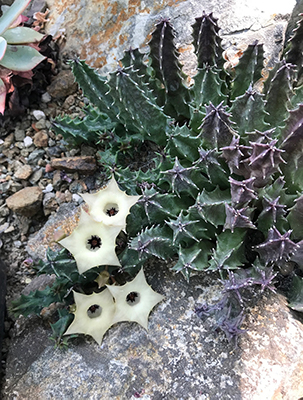 Huernia thuretii var. primulina comes into flower at the end of the summer and blooms through the fall months. The flowers emerge on short stalks from the bases of the stems, and they are an inch or a little more in diameter (2.5 – 3 cm). The outer part of the flower is the pale-yellow corolla, with its 5 triangular lobes forming a 5-pointed star. At the middle is a cup-like depression with the black-purple corona nested within.