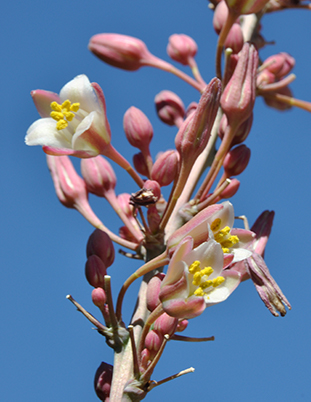 The genus Hesperaloe is a small one, with 5 species and one additional subspecies, and they are all native to northern Mexico, with one extending across the border into central Texas. They are members of the Agave Family (Agavaceae), which in some classification systems is treated as a subfamily (Agavoideae) in the Asparagaceae.

The best-known species in Hesperaloe is Hesperaloe parviflora, which is a widely used landscaping plant in the southwestern U.S. Its tubular red flowers resemble those of an Aloe, and this is the reason for the genus name, with Hesperus referring to the Evening Star, since these plants occur in the Western Hemisphere, unlike the true aloes. The resemblance is the result of convergent evolution, since Hesperaloe is actually related to Yucca and Agave rather than to Aloe. 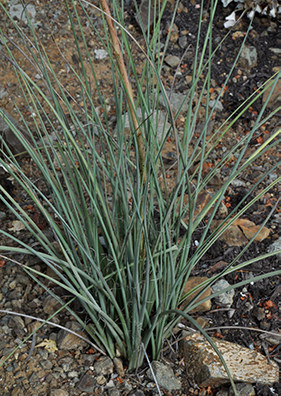 Hesperaloe tenuifolia has a very localized distribution in southern Sonora in northwestern Mexico, where it grows in hilly terrain in pine-oak forest at about 5,000 feet altitude (1500 m). It was discovered relatively recently, and was given its scientific name in 1997.

The leaves of H. tenuifolia are blue-green, narrow, and up to 3 feet long (.9 m). The newer leaves at the center of the rosette are upright, with the older leaves on the outside arching gracefully outward. Fine fibers curl from the edges of the leaves. Plants make occasional offshoots from the base to form a small clump in time. This species is smaller, finer-textured and daintier than the other species in the genus. 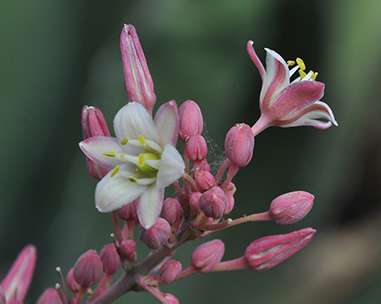 As with other species of Hesperaloe, H. tenuifolia has a long flowering period, beginning in the spring and continuing on through to the fall. Its slender flower stalk is up to 70 inches tall (1.8 m), with a few small side-branches. Each side branch, and the upper part of the main stalk as well, has attractive pink buds, which open at night into white-faced flowers about a half-inch across (13 mm). There are 6 petals (properly, these should be referred to as “tepals”, a term used when it is hard to say what is a petal and what is a sepal), and these curl outward to show off the yellow pollen at the center. Although the flowers do not usually stay open in the middle of the day, their pink outsides remain an attractive feature. Rather than opening in sequence from bottom to top, as with an Agave inflorescence, the flowers of H. tenuifolia open in no particular order, and there are seldom more than a few open on any given day.

The fruit of Hesperaloe tenuifolia is a dry woody oval capsule, with a rough texture due to bumpy transverse ridges. Eventually, the capsule splits along its seams to spill the flat black seeds.