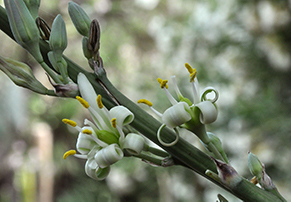 Hesperaloe is a small genus in the Agave Family (Agavaceae), which in recent years has been treated as a subfamily within the larger family Asparagaceae. Whether considered as a family or as a subfamily, the agaves and their relatives form a distinctive group, all native to the Americas. Fibrous leaves are a recurring feature in the group, and several genera contain plants with fibers that curl off from the margins of the leaves. This is the case with some species of Agave and Yucca, but it is true for all the species of Hesperaloe. 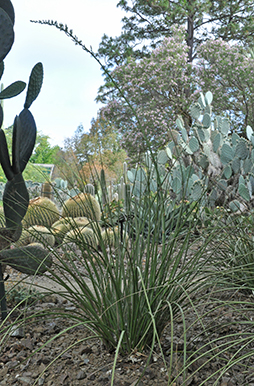 Hesperaloe nocturna forms a clump of gray-green narrow grass-like leaves that curve outward, with fine thread-like fibers curling from the edges. The clump is about 4 to 5 feet tall, and a little more than this in diameter because of the way the leaves arch out. The tall slender flower stalk emerges in spring, and the flowering takes place over a long period through the summer and fall. 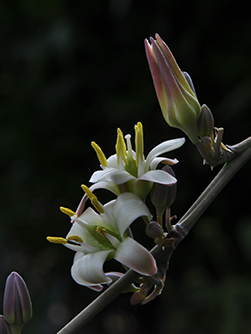 The inflorescence of H. nocturna rises to a height of 7 to 10 feet (2 to 3 m), with a few spreading side-branches. The total length of the inflorescence is greater than this (about 12 feet, or 3⅔ m), but it arches to the side rather than remaining erect. Each floral branch holds small clusters of flowers at short intervals along its length. The open flowers are about 1½ inches across (3.8 cm). Instead of opening all at once, or in sequence from bottom to top, the flowers open a few at a time all up and down the stalk, in no particular order. At the bud stage, the flowers are grayish green, often with a lavender or pink tinge. When the flowers open, the tepals (this term is used in place of petals in flowers where there are not distinctly different and clearly identifiable sepals and petals) curl strongly outward to reveal the pale interior of the flower, which is white or tinged with green or pink. The flowers open at night when the moths that pollinate them are active, but they remain open into the following day, so that they can be appreciated without the need to venture out in the dark with a flashlight.