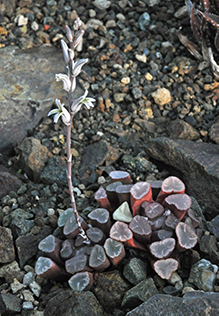 Having succulent leaves offers a way for plants in arid places to store moisture that can keep them going through dry periods. However, being a juicy morsel can be a liability where browsing animals are present, and one route for avoiding getting munched is to grow sunken in the ground, which has the added benefit of giving protection against temperature extremes and against getting stepped on. In order to utilize this strategy, the plant must have a way for sunlight to reach its buried leaves, and an ingenious solution is to have a translucent area at the tip of each leaf, allowing light to enter and reach the sides of the leaf from the inside. Several different plant groups in South Africa have gone this route, and one of these is the genus Haworthia. Not all Haworthia species have “window leaves”, but Haworthia truncata var. maughanii is a fine example of one which does.

H. truncata maughanii was originally named simply Haworthia maughanii and viewed as a sister-species to Haworthia truncata, which is clearly its closest relative. In view of this closeness, the two plants are now classified as varieties of one species. In var. truncata, the leaves are flattened and arranged in a fan, while in var. maughanii, they are cylindrical and arranged in a rosette, but both varieties have flattened translu 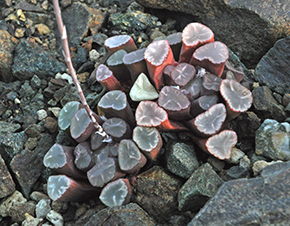 cent end-areas. Because of their differing leaf forms, the windows on H. truncata var. truncata are strips, while those on var. maughanii are more or less circular. It should be noted that these plants are not “retuse haworthias” (members of the group closely related to Haworthia retusa); while these also have “window leaves”, their leaves bend outward like an extended thumb, with a triangular window area. 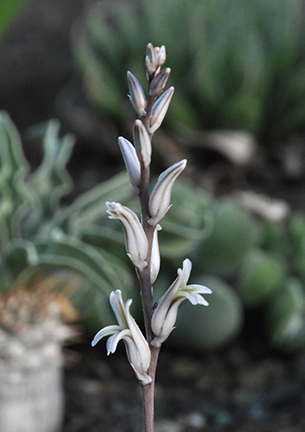 Haworthia flowers are small and inconspicuous, and they differ little from one species to another. They are white or off-white in color, and are held on wiry stems that emerge from between the leaves. Each flower has 6 tepals (this term is used in lieu of “petals” for flowers which do not have distinctly separate sepals and petals), with 3 of them bunched together and curling upward at the tips, and the remaining trio curling downward. In nature, H. truncata var. maughanii comes into flower during the late spring and summer months, but plants in cultivation may flower at other times of the year. While not showy, the flowers have a certain charm when viewed up close