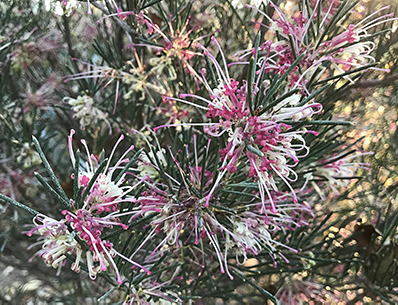 Hakea is a large genus of shrubs and small trees in the Protea Family (Proteaceae), with 150 species listed in Wikipedia. They are all native to Australia, with the majority coming from the winter-rainfall region in the southwestern part of the continent. The flowers of Hakea species are held in clusters along the stems, and they resemble those of the relatives in the genus Grevillea. In both groups the flowers are small and tubular, with a long, curved style projecting outward. 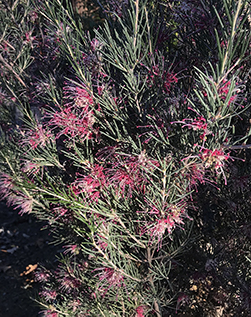 The styles are called “pollen presenters” because they start out small and enclosed within the floral tube, but then they lengthen and push out of the tube, becoming dusted with pollen at the tip as they do so. When they have elongated fully, the dollop of pollen is positioned to come into contact with visiting pollinators, whether they be insects, birds or even small mammals.

Among the species of Hakea from the winter-rainfall region is a shrub named Hakea verrucosa, which grows on rocky hills near the southern coast of Western Australia. Mature plants range from 3 to 10 feet tall (.8 m to 3 m), and though they are well-branched, they have an airy look because of their narrow needle-like leaves, which may be up to 2⅓ inches long (6 cm). 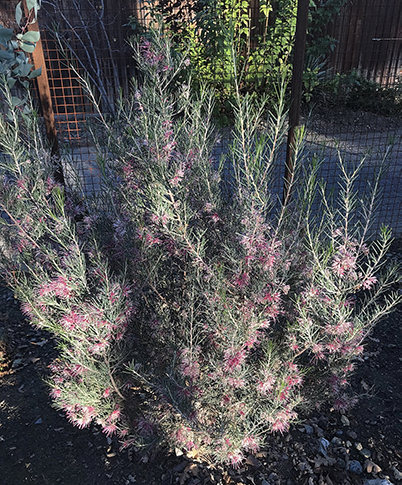 Hakea verrucosa begins flowering in late autumn and continues through the winter months. The small clusters of flowers are scattered amid the foliage and look like little red-and-white corsages. When each flower first opens, it is white (or nearly so), but it darkens to pink or purplish-red. Because a cluster has flowers of differing ages, it has an ornamental two-toned look.

One of the distinctions between Hakea and Grevillea is that species in Hakea have woody seed pods, while those in Grevillea do not. 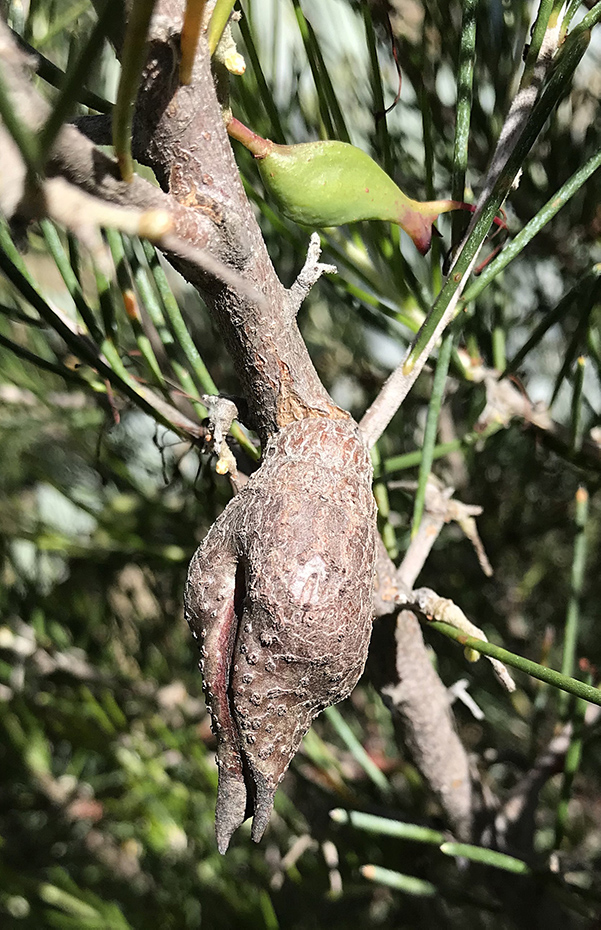 In the case of Hakea verrucosa, the pods are an inch or a little more in length (25-35 mm) and adorned with warts and ridges (the name verrucosa means “warty”, in reference to the surface of the seed pod). At the tip are a pair of sharp beak-like tips, with a slit between them. The pods are long-lasting and held along the branches, but eventually they split open to release two seeds.

H. verrucosa is not difficult to grow, but it does not like alkaline conditions and prefers good drainage. It is quite drought-tolerant and likes plenty of sun.