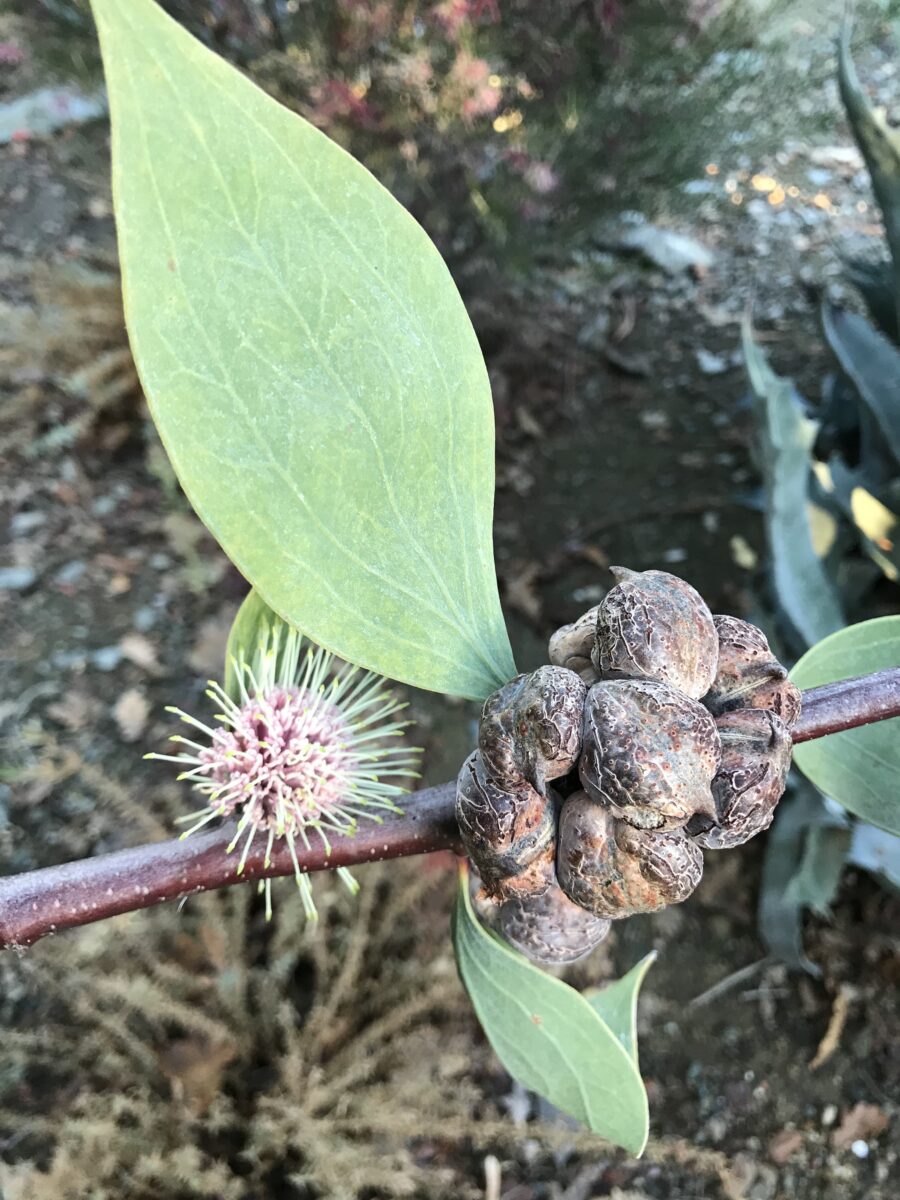 Hakea is an Australian genus of about 150 species of shrubs and small trees belonging to the Proteaceae, or Protea Family. Members of the genus have clusters of flowers held close to the stems, with the clusters ranging from round to elongated. Like other members of their family, they have an unusual pollination syndrome. The flowers are small, with the perianth forming a tube within which are the stamens and pistil. The stamens remain small, but the pistil enlarges greatly as it develops. When a flower first opens, its pistil is curled and short, and as it lengthens and straightens it comes into contact with the stamens and gets dusted with pollen. Eventually it becomes much longer than the rest of the flower and functions as a “pollen-presenter”, with its dusting of pollen in position to get rubbed off by pollinators attracted by the flower’s nectar production. Later, the stigma at the tip of the pistil becomes receptive, and it is then able to make use of pollen brought from other plants to fertilize the ovaries and begin developing seeds. All the species in Hakea have tough, woody, long-lasting seed capsules that eventually split open to release two winged seeds.

Though Hakea species may be found in various parts of Australia, the winter-rainfall region in the continent’s southwest has the most species. One of these is Hakea petiolaris, from near Perth and up to about 300 km east and northeast of there.

Hakea petiolaris is a shrub or small tree with an upright growth habit, with mature plants typically ranging in height from a little over 5 feet to 12 feet (1.6 to 3.6 m), though they may sometimes be even taller than this. The younger branches are reddish, and they bear leathery pale gray-green leaves which are from 2.2 to 3.4 inches long (5.5 to 8.6 cm). The leaves are widest near the middle, with a span of .95 to 1.8 inches (2.4 to 4.6 cm), and they taper to a point at the tip, as well as narrowing to meet the slender petiole at the base. A petiole is the leaf’s stalk, and in many Hakea species the leaf blade is very narrow and extends down all the way to the point of attachment, so that a petiole is not present. The presence of a distinct petiole in H. petiolaris is the reason for its name. Above the petiole, branching veins are quite visible on both surfaces of the leaf.

The flowering period for Hakea petiolaris is in the fall and winter months. At the Ruth Bancroft Garden in Walnut Creek, California, our plants usually begin flowering in late October and end in January. This is one of the Hakea species with round flower clusters, and the globes of flowers emerge at various points along the stems. Each cluster is only about 2 to 2½ inches in diameter (5 to 6.4 cm), but it holds as many as 200 tiny flowers. At the bud stage, the flower cluster is greenish-white, with the styles curled up. As the flowers mature, the styles straighten and extend outward so that the cluster has the form of a small sea urchin, giving rise to the common name “sea urchin hakea”. At this point the cluster is whiter, but with a pale mauve tint to the short perianths at the center of the ball. As the flowers age the color of the perianth darkens to pink and then violet-pink, while the protruding styles remain white. Since clusters of varying ages are often present on a plant, all the different color stages can be seen simultaneously. After the flowers go by, those that have been successfully pollinated begin to develop woody fruits. These start out smooth and pink-tinged, tapering to a pointed tip with the shriveled remains of the style still attached. As they age, they fatten and become lumpy and brown and woody, like a clump of little walnuts with tiny beaks at their tips. The mature capsules are about 1 to 1.4 inches in length (2.6 to 3.6 cm). Only a minority of the flowers develop into seed pods, so that a cluster of 120 to 200 flowers might yield a clump of a dozen or so capsules. As with other species of Hakea, the capsules are persistent, and they split open at maturity to release a pair of winged seeds.

Hakea petiolaris likes good drainage and plenty of sun, though it can be grown in partial shade as well. It is not as averse to soil alkalinity as many other Proteaceae, and it can take temperatures down to 25° F without injury (- 4° C). Although it may experience tip-damage below this, it will bounce back from temperatures even as low as 18° F (- 8° C). 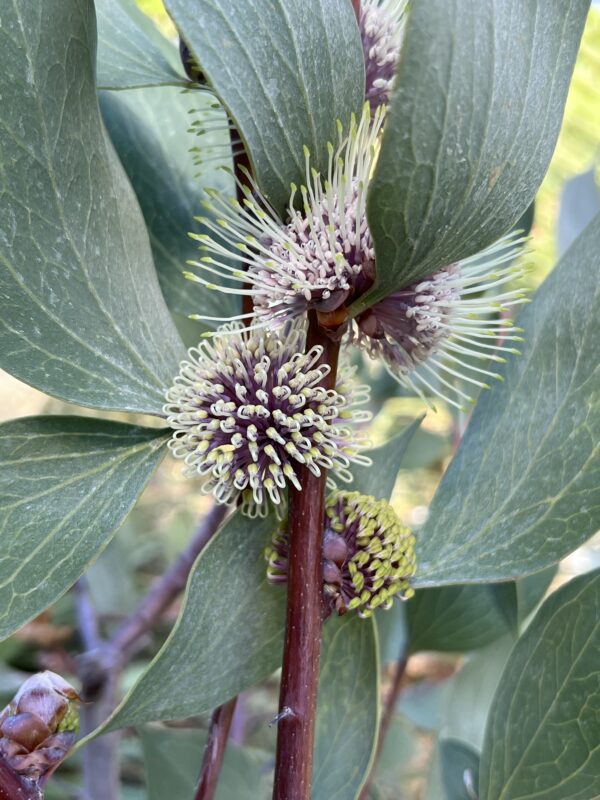 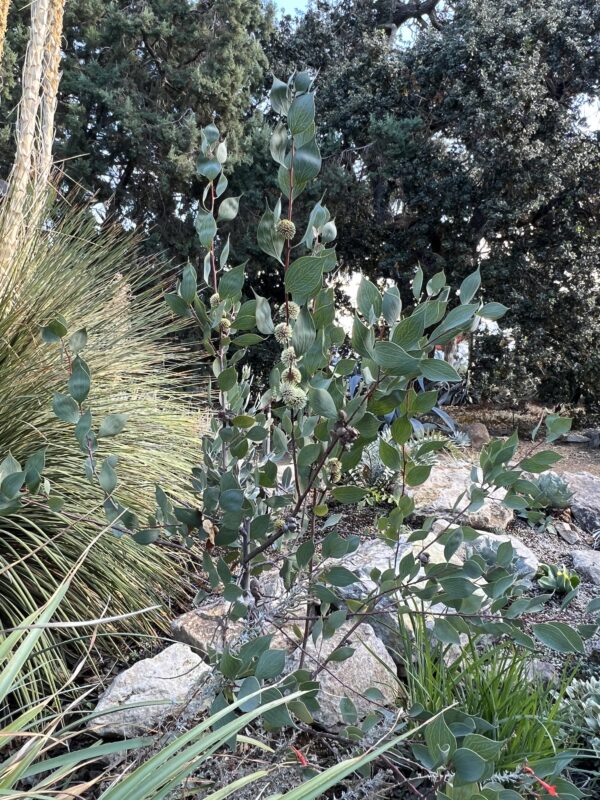 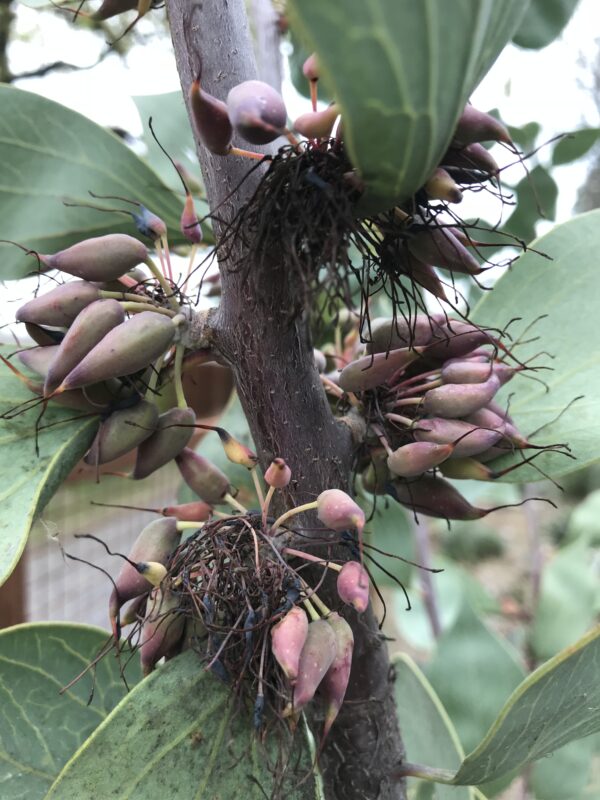 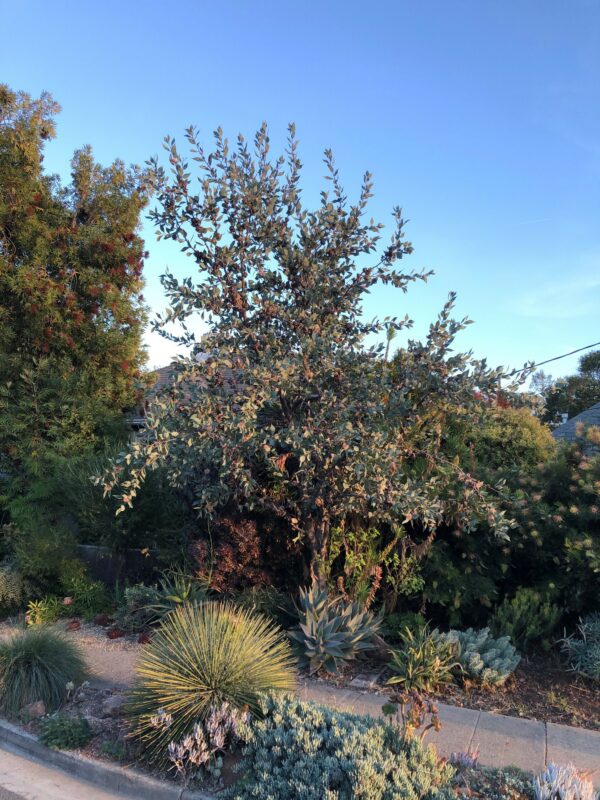