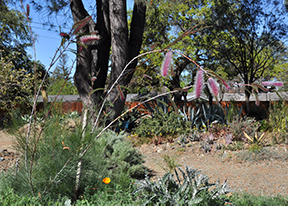 Grevillea is a large genus, with about 250 species, belonging to the Protea Family. The great majority are from Australia, and they occur in the western Mediterranean-climate area as well as in the east where summer rainfall predominates. Some Grevillea species are trees, but most of them are shrubs. Though they are in the same family as the proteas, their flowers are very different. Typically, Grevillea flowers have clusters of little curly-cue flowers with long arching styles extending out, most often in shades of red and pink, but some have a different look. 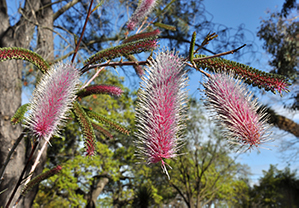 Grevillea petrophiloides is a very distinctive species native to Western Australia. It forms a bush which can eventually reach a height of 5 feet or so (1.5 m), with leaves up to 8 inches long (20 cm) which are very finely divided into needle-like segments, so that the plant has an airy look. The tall flower stalks appear in winter and spring, rising to a height of 7 to 8 feet or more (2 to 2.5 m), and bearing bottlebrush-like clusters of flowers. Each “bottlebrush” is composed of many tiny rose-pink flowers, but the protruding stamens and pistils add a contrasting touch. These are initially green-tipped, then turning blue-gray and finally a soft mauve color. With different clusters at different stages, the overall effect is wonderful.

The cultivar ‘Big Bird’ was selected and named at U.C. Santa Cruz, which has an extensive collection of Australian native plants. It was released for sale through their Koala Blooms plant introduction program only in 2012, so this is a brand new arrival on the horticultural scene in California. It needs sun and good drainage, and like most members of the Protea Family it should not be given fertilizers with high levels of phosphorus. It is cold-hardy down to at least 25° F (-4° C).