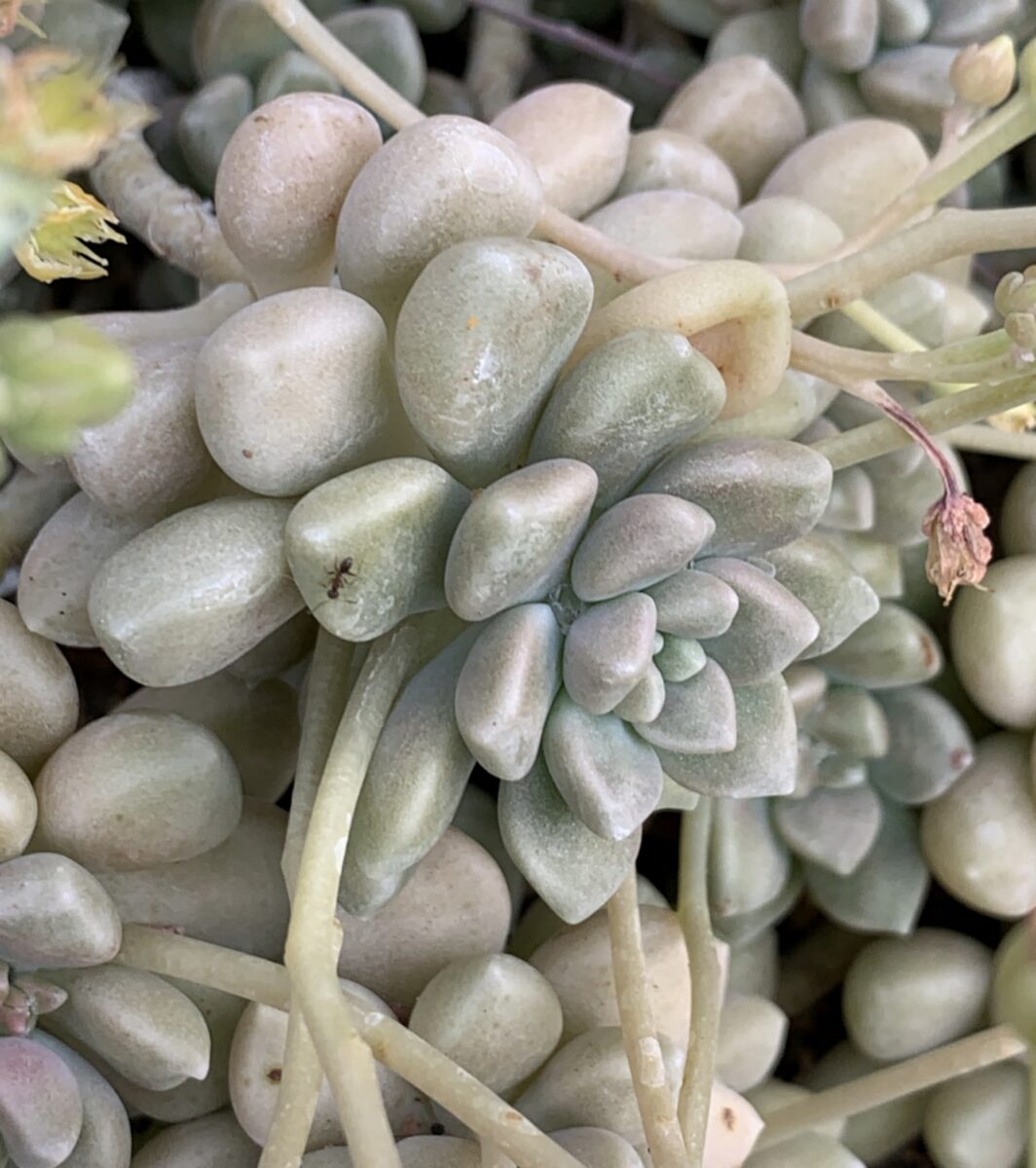 The genus Graptopetalum, belonging to the Crassulaceae, is not a large group, with 18 species recognized at present. Most of the species occur in Mexico, with two extending northward into Arizona. It is ironic that the best known and most widely cultivated species in the genus is Graptopetalum paraguayense, whose name falsely implies that it originated in Paraguay, though it too is from Mexico. These plants are related to other genera in the family found in Mexico, including Echeveria, Pachyphytum, and Mexican members of the large genus Sedum.

The name Graptopetalum means “marked petals”, referring to the red lines or splotches found on the petals of most of the species. However, an exception to this rule is Graptopetalum mendozae, with pure white petals. This delightful little species is found only on 3 old volcanic plugs* in the state of Veracruz, not far inland from Mexico’s Caribbean coast.

G. mendozae is a small clump-forming plant, with its many slender stems initially growing upright, but soon sprawling to the side, or hanging downward if growing on a cliff. Its chubby leaves are clustered at the ends of the stems; they are oval to somewhat spoon-shaped, with the upper surface flattened, while the bulging lower surface has a slight keel towards the blunt tip. The leaf color is difficult to describe, but it might be characterized as a pearly mauve-gray with a pinkish tinge. The lower leaves in each rosette are the largest, and these may be up to .7 inch long (18 mm) and .43 inch wide (11 mm). However, they are often smaller than this.

Although its flowers are not large and showy, G. mendozae is very free-flowering, with inflorescences up to 4 or 5 inches long (10 to 12.5 cm). An inflorescence may be unbranched, but often it forks, with each fork holding 3 to 10 flowers. The flowers are well-spaced rather than clustered together, and they have relatively long pedicels (the stems of the individual flowers), these being .4 to .8 inch long (10 to 20 mm). As is typical for Graptopetalum, the flowers open widely and tend to face upward, showing off their white petals. The flower diameter is .4 to .6 inch (10 to 14 mm).

After being pollinated, a flower’s 5 seed chambers (carpels) swell up while the petals wither. At maturity, the carpels split open to release many tiny seeds.

* A volcanic plug is the exposed core of an extinct volcano. 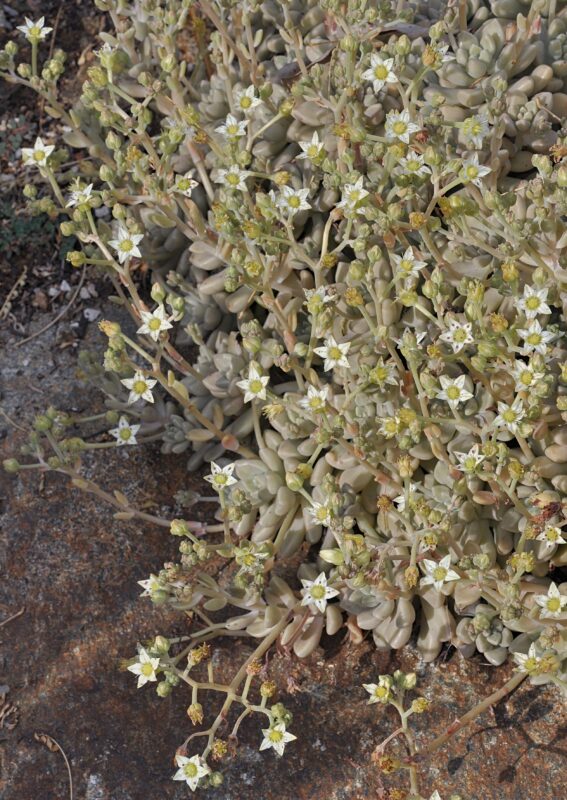 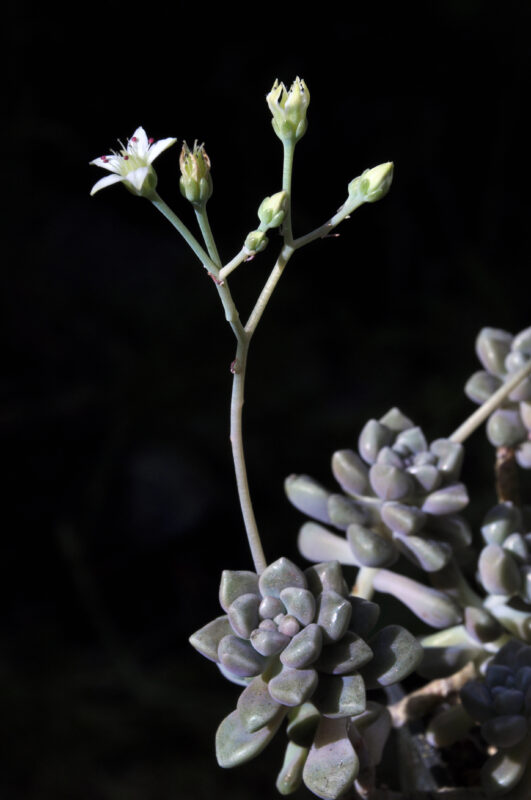 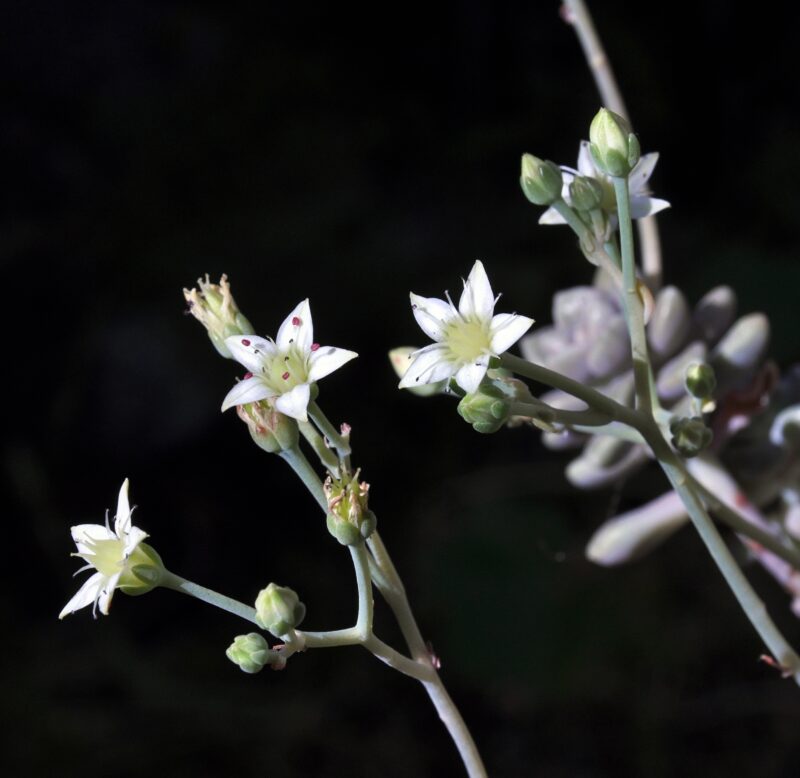