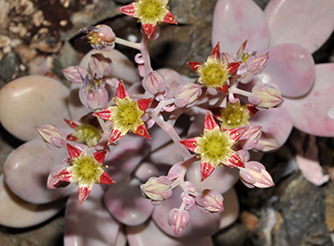 Graptopetalum amethystinum
The genus Echeveria is a large one, with most of the species in cultivation originating in Mexico. Some of the species in horticulture are known as “hens-and-chicks” and are commonly seen as garden plants in areas with mild winters. There are several closely related smaller groups of plants, and one of these is the genus Graptopetalum, with 17 species and a few additional varieties. All of these occur in Mexico, with 2 extending northward into Arizona. The genus name Graptopetalum means “inscribed petal” and refers to the red markings found on the petals of most species. Flowers in Echeveria are urn-shaped or tubular, with the mouth of the flower facing outward or downward, but in Graptopetalum the petals spread widely and face upward, like little 5-pointed stars.

Mexico’s Sierra Madre Occidental is home to a beautiful species named Graptopetalum amethystinum, which is found in the states of Jalisco, Durango, Sinaloa and Zacatecas. This plant has highly succulent pallid leaves which may be bluish but are often tinged with lilac or pink. In most species of Graptopetalum the leaves are puffy, but flattened on the upper side, and this is sometimes true of G. amethystinum as well, but it has more rounded leaves than the others which can resemble tittle balloons. In this respect, the species looks much like members of the related genus Pachyphytum, but the two genera have distinctly different flowers. 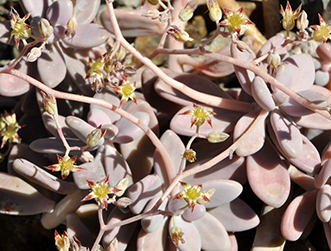 Like most kinds of Graptopetalum, G. amethystinum is clump-forming, and its stems may reach a length of up to a foot (30 cm). The plants grow on cliffs, and while the stems initially grow upward, they end up dangling downward as they elongate, with the leaves arranged in rosettes at the ends. If grown in a less vertical setting, the plant will sprawl to the side.

Graptopetalum amethystinum comes into flower in late spring, usually beginning in the latter half of April at the Ruth Bancroft Garden. The branched inflorescences emerge from between the leaves, bearing dozens of buds which open a few at a time over a period of weeks. The petals are pale yellow to almost white, with deep red markings. The red is more abundant toward the tips, and sometimes the entire tip is bright red, while the lower part of the petal tends to be red-speckled. Though small, about .6 to .7 inches long (15 – 18 mm), the flowers are quite beautiful. 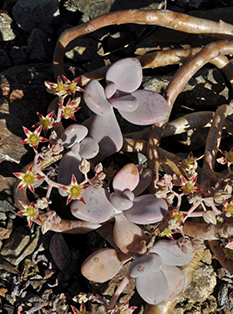 This species does well in cultivation, and it may be grown in full sun under cool coastal conditions, but a little bit of shade suits it in hotter inland areas. As usual with plants that grow in rocks, it wants good drainage. Temperatures down to freezing do not bother it, but it should be protected if it gets much colder than this.