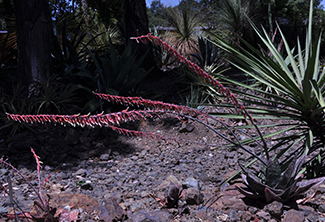 Gasteria is a much smaller genus than the related Aloe, but both species and hybrids are widely cultivated due to their attractive leaves and flowers.  They are easy to grow in pots, or in the garden where winters are mild.

One of the less-commonly encountered species of Gasteria is G. polita, described by Ernst van Jaarsveld in 2001.  It is closely related to Gasteria acinacifolia, a species found near the coast in south-central South Africa.  However, G. acinacifolia is a larger species with much longer leaves, and young plants have small tubercles sprinkled over their surfaces, giving them a rough texture.  By contrast, the leaves of G. polita are always smooth, with a polished appearance.

Gasteria polita was first discovered growing as an under-story plant it a forested area, the first species in the genus to be found growing under such conditions.  With the damp and shady growing environment, it is no surprise that this species grows well as an indoor potted plant, and it does not mind liberal watering, though it is reasonably drought-tolerant.  Recently a new population was located in fynbos vegetation, which is a brushy chaparral-like plant community.

In their native habitat, plants of Gasteria polita seldom exceed 10 inches (25 cm) in diameter, but our plant 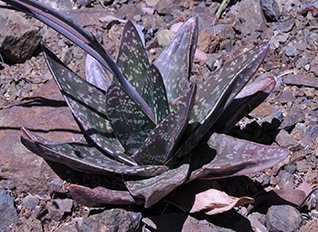 t the Ruth Bancroft Garden has grown a little larger, with a span of 14 inches (36 cm).  The leaves are tongue-like and distichous (stacked in one plane on either side of the growing tip) when plants are young, but they soon develop an off-center keel so that mature leaves are wedge-shaped, and at this point they radiate in all directions.  The leaf color is deep green with a smattering of off-white spots on both sides, but with sufficient sun they take on a purplish tinge.  The leaf margins have white tubercles, sometimes fused together over most of the leaf length to form a narrow white band.

Like other species of Gasteria, Gasteria polita has dangling curved-tubular flowers with swelling at their 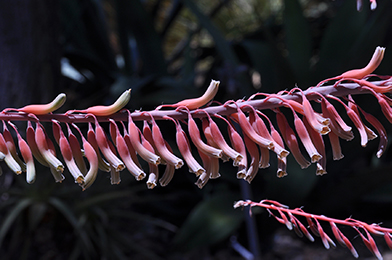 bases.  The coloring is quite typical for the genus, coral-pink at the base and whitish with green striping  toward the tips.  Most of the other species have flower stalks which are more or less erect, but this one, like its close relative G. acinacifolia, has stalks which start out growing upward, but then bend to the side and extend horizontally.  The stalks may be single, or they may have a branch or two.  The individual flowers are about 1⅓ to 1½ inches long (35 to 38 mm).

The seed capsules are finger-like, initially grayish-green but turning brown at maturity and splitting open to spill the black seeds.