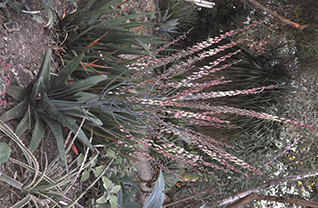 With 25 currently accepted species, along with a modest number of subspecies and varieties, Gasteria is not a large genus. Geographically, this group occurs only in Southern Africa, with the great majority of the plants found in South Africa. However, the thick tongue-like leaves found in Gasteria are very appealing, and they have an amazing array of leaf markings and textures. All have dangling more or less tubular flowers which appeal to nectar-loving birds. The largest of all the species is Gasteria excelsa, native to South Africa’s Eastern Cape Province.

The leaves of t 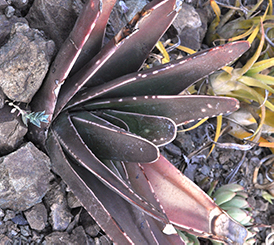 he more robust forms are long and sword-like, and a large plant may attain a diameter of 2 to 2½ feet or more (60 to 75 cm). Even the smaller forms grow to be a foot or more across (30 cm). Seedlings start out with chubby tongue-like distichous leaves (all in one plane) which are heavily spotted and slightly bumpy to the touch.  As they get older, the leaves develop a keel on one side of the lower surface, so that they are wedge-shaped in cross-section, and at this point they begin to develop a rosette form. In tandem with this, the leaves cease to be bumpy and in many cases they lose their spots, or retain only a few of them.

This is a summer-flowering species, with a branching panicle bearing multiple racemes of dangling flowers. The flowers are pink, with a green and off-white striped mouth, and they are 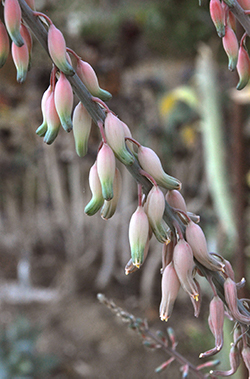 about an inch long (22 to 26 mm). Like many species of Gasteria, this one has a swelling in the lower part of the flower, and this pot-bellied form is the source of the name Gasteria, since “gaster” means “stomach” in Latin. The floral branches are spreading-ascending, and on a good-sized plant the larger lower branches may re-branch, with the flowers spaced along the upper portion of each branch. Our largest plant at the Ruth Bancroft Garden has had up to 25 racemes on an inflorescence, with a total height of over 6 feet (1.9 m).

Though Gasteria excelsa is usually single, plants may sometimes put out a few offsets. In any case, leaves may be rooted to propagate new plants, though some patience is required. In nature, plants are often found growing in the shade, with their leaves a deep-green color, but where they are in more exposed positions they will often become tinged with a brick-red or brownish-orange color. Though frosts are rare in their native range, we have had plants come through unscathed when the temperature has dropped to the mid-twenties F at the Ruth Bancroft Garden (-4° C).