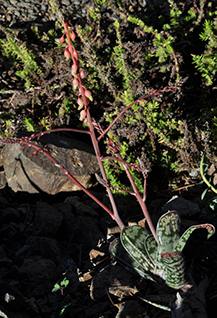 Gasteria species all come from South Africa, with a couple of species whose ranges spill over into adjacent Swaziland (in the east) and southern Namibia (in the west). Among those found only in South Africa is Gasteria bicolor, from the south-central part of the country, in the general vicinity of Port Elizabeth.

Gasteria bicolor was long known as Gasteria maculata, but under the rules of botanical nomenclature this name could not be kept because Gasterias were originally described as Aloe species, and Haworth’s name Aloe maculata (used by him for the Gasteria) repeated an earlier name for another plant still called Aloe maculata. Despite naming confusions, G. bicolor is a distinctive and delightful species which is easy to grow in the ground or as a potted plant.

As with most species of Gasteria, G. bicolor starts out with a distichous leaf arrangement (with its leaves all in one plane), and in some forms this arrangement persists in mature plants. With most forms, however, at maturity a distinct keel forms on one side of the lower leaf 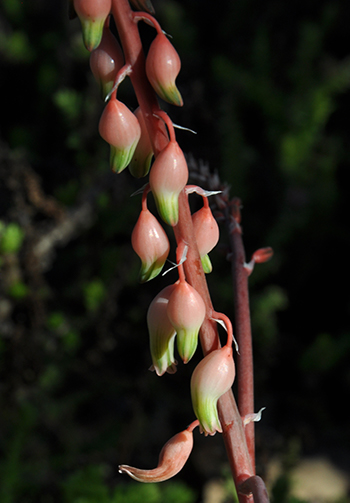 surface, yielding a wedge-shaped cross-section. When this happens, the leaves begin to whorl. The leaf surface is smooth and glossy, attractively peppered with whitish spots. The leaves are deep green in color, but may become red-orange, particularly on their tips, when in a sunny exposed position. In their native habitat, plants usually grow in thickets where they do not get too much direct sun, but where they peek out from a bush or a rock, they may color up. In cultivation, this species does well as an indoor plant or in a shady position in the garden. Full sun should be avoided except in cool coastal gardens. 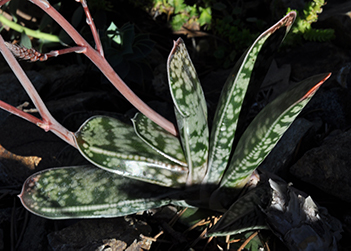 at maturity is typical. Small forms, including G. bicolor var. liliputana may be as short as an inch or less (2½ cm), while the largest forms may have leaves over a foot in length (30 cm). Most species of Gasteria are stemless, or nearly so, but plants of G. bicolor usually develop a distinct stem in time.

Gasteria bicolor is primarily a spring-flowering species, though it may begin in the latter part of the winter. The flower stalk may lack branches, but typically it has a few, and robust plants may have up to eight. The dangling pot-bellied flowers arrayed along the flowering stems resemble those of other species in the genus, but are on the short side at ½ to ¾ of an inch (12 to 20 mm). They are light pink at the swollen base, fading to white in the middle and with green striping toward the tip.