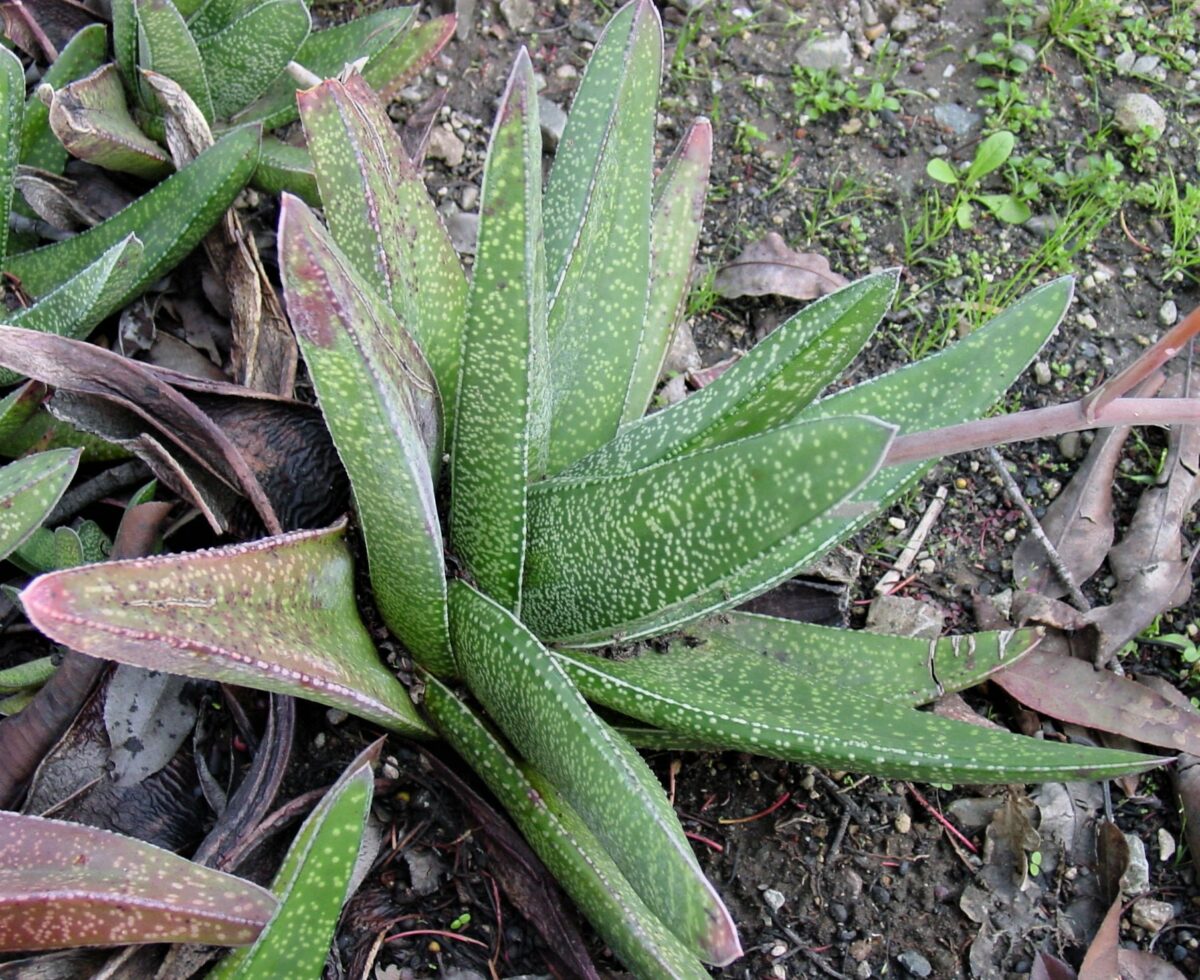 The genus Gasteria belongs to the family Asphodelaceae, and it is closely related to the larger genus Aloe. All of the species occur in South Africa, with a couple of them crossing over into neighboring countries as well. In the Monocots volume of the Illustrated Handbook of Succulent Plants (second edition published in 2020), 26 species are recognized, along with a dozen additional varieties. Most of these are modest-sized stemless plants with a rosette diameter of a foot (30 cm) or less, but a few of the species can attain a larger size. One of the larger ones is Gasteria acinacifolia, a species found along South Africa’s southern coast.

The distribution of G. acinacifolia is centered on the city of Port Elizabeth in Eastern Cape Province, and from there its range extends eastward to near East London, as well as westward to near George, across the border in Western Cape Province. It is often found growing in sand, though at some locations it can be found growing on rocks. Although the climate in its home range is mild and frost-free, the species has a surprising degree of cold-tolerance, and plants at the Ruth Bancroft Garden survived temperatures of 20° F (-7° C) during a winter cold spell.

Like many species in its genus, G. acinacifolia has a distichous leaf arrangement as a young plant; that is, its leaves are all in one plane, one atop the other on either side of the growing tip. At this stage the strap-like leaves have a rough texture from the rounded tubercles sprinkled across their surfaces. As the plant enlarges, the tapered leaves become thicker and develop a distinct keel on the underside. The keel is off-center, so that the leaf in cross-section is wedge-shaped. At this stage the leaf surfaces are smooth, but peppered with small white spots. The margins and keel are bumpy due to small white tubercles found along them at irregular intervals. The basic leaf color is deep green, but plants in sunnier positions may become tinged with red, purple or orange. The leaves may be straight, slightly arched, or slightly incurved, and they sometimes curve a little to the side like the blade of a sickle. A mature rosette can attain a diameter of up to 26 inches (65 cm), and plants may sometimes be solitary, though they often produce a few offsets to form a small group.

Spring is the main flowering time for Gasteria acinacifolia, but plants frequently produce additional flower stalks at other times of the year; at the Ruth Bancroft Garden there is no month that has not witnessed a plant in flower at one time or another. At its first flowering, the inflorescence is usually simple (without floral branches), but more mature plants often have up to a half-dozen or more side branches of varying lengths. When the inflorescence emerges it rises upward, but the floral branches then bend to the side and extend horizontally, giving flowering plants a flat-topped look. The flowers are packed closely together along the racemes, and a single raceme often holds dozens of flowers, with the lowest ones opening first. The dangling tubular flowers are some of the largest to be found in Gasteria, with a length of up to 1¾ inches (45 mm), or occasionally even a bit more than this. The basal half of the flower is coral-colored and slightly swollen, and then there is a slight constriction at the middle; beyond this the flower is green-and-white striped, often with the tips slightly flared outward. The six stamens bear yellow pollen, and they usually do not extend beyond the tube of the flower. The white style, tipped with a small sticky stigma, is nested between the stamens.

The floral tube contains a clear sweet nectar, and this attracts the sunbirds that are the main pollinators of the species. When the birds probe the flowers to gain access to the nectar, they get a dusting of pollen on their beaks, and when this is carried along to another plant, the result is cross-pollination. After a flower is pollinated, the ovary within starts to swell into a seed pod, while the floral tube withers. In contrast to the dangling flowers, the seed pods are held upright. The pods are cylindrical with tapered bases, and they are 1.4 to 1.7 inches long (35 to 43 mm). When they ripen after about 6 to 8 weeks, they dry and begin to split open at the tips, allowing the black flake-like seeds to spill out. 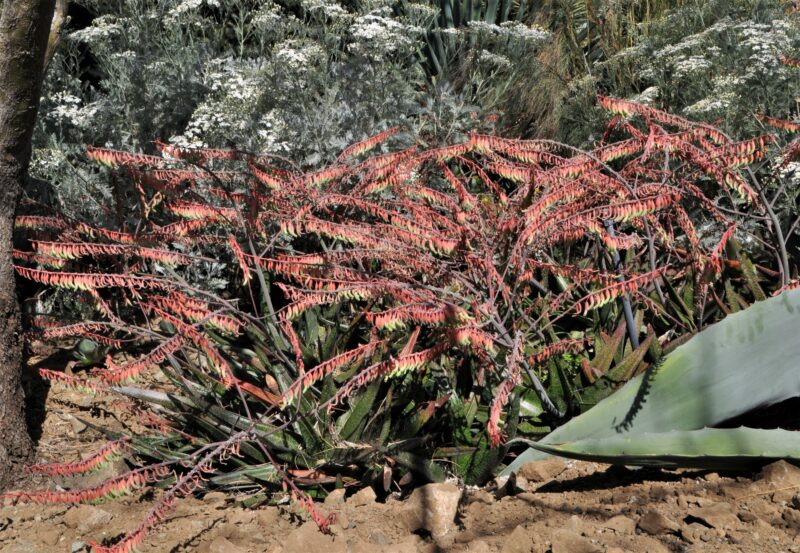 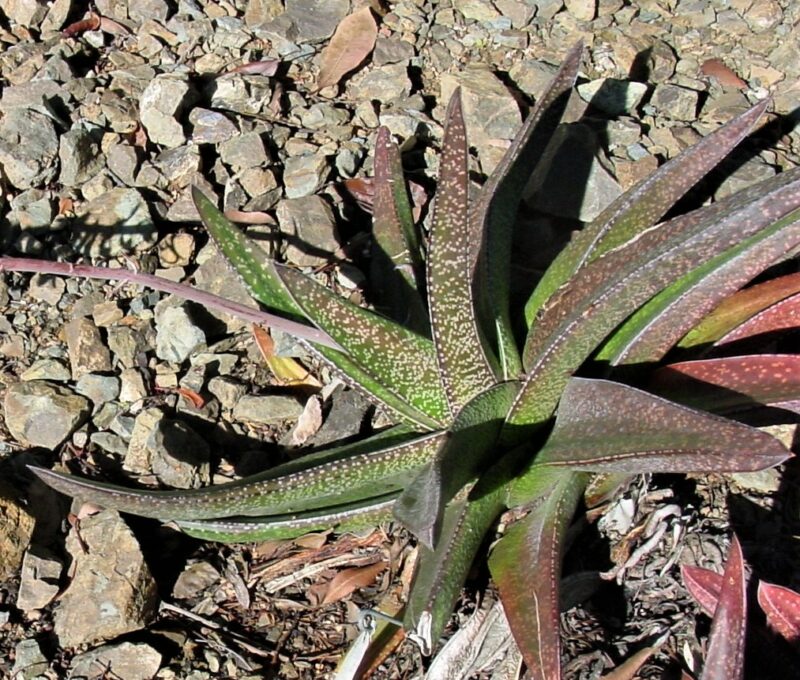 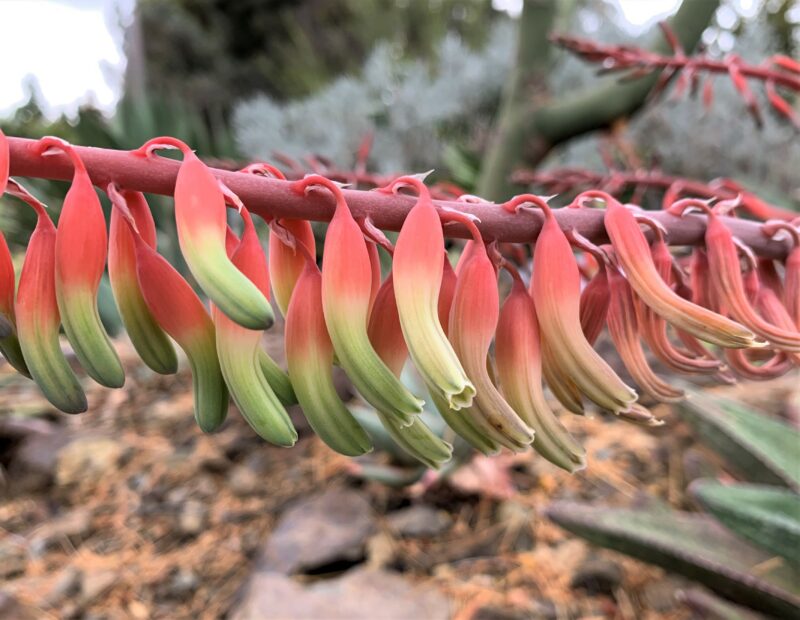 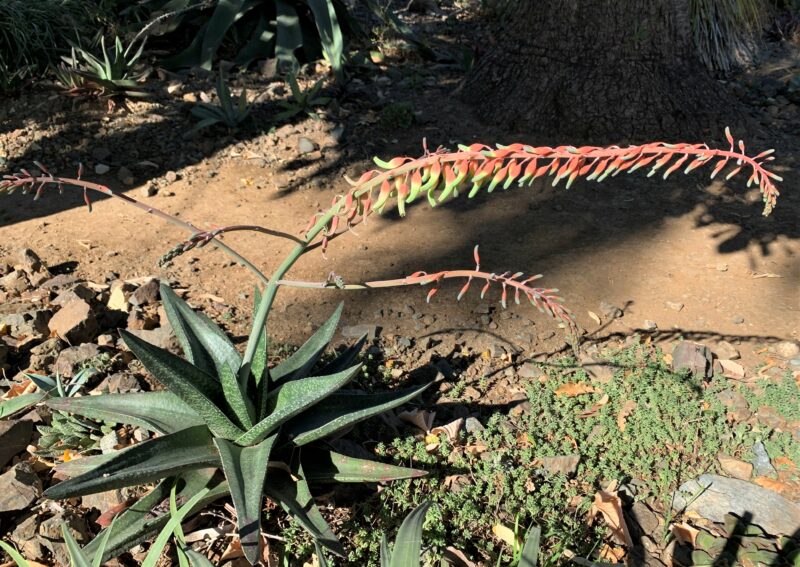