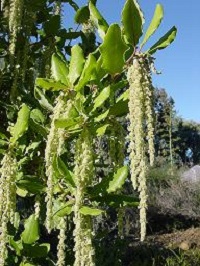 Garrya is a genus of about 18 species native to the westeren U.S., Mexico, Guatemala and islands in the Caribbean.  They have their own family, Garryaceae, and used to be included in the same order as the dogwoods, but have now been placed in a new order, Garryales.  The species in Garrya are evergreen wind-pollinated shrubs with leathery oval leaves.  The species most commonly cultivated in California gardens is Garrya elliptica, native to California’s Coast Ranges and northward into Oregon.

Garrya elliptica is a handsome shrub which can attain a height of 10 feet or more.  Its leaves are deep green 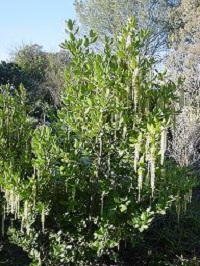 on the upper side, with wavy margins, and felted pale green on the undersides.  It is notable for its attractive pendulous catkin-like inflorescences in winter, which give rise to its common name of “silk tassel”.  Like all species of Garrya, Garrya elliptica is dioecious (with separate male and female plants).  The inflorescences on male plants are especially attractive, since they are longer and hang more loosely, so that they move gracefully in a breeze.  When the light catches them in the early morning or in the evening, they glow like icicles.  Their color is white to yellowish-white or greenish-white.  The pale green female catkins are shorter and stiffer, but they produce attractive dark purple grape-like clusters of fruit which persist over the summer months.

At the Ruth Bancroft Garden, we have the male cultivar ‘James Roof’, notable for its extra-long flower clusters, which can be nearly a foot long (30 cm).  It makes a beautiful display in January and February.