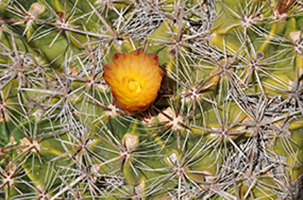 Most kinds of barrel cactus have either a more-or-less spherical form, like a pumpkin, or a short-columnar form, like a fire hydrant. Though plants with multiple heads may sometimes be encountered, they are often single-headed. An exception to this general picture is Ferocactus robustus, from the vicinity of the city of Tehuacan, to the east of Mexico City. Unlike its more commonly seen relatives, this species has modest-sized heads, about the size of an orange or a grapefruit, but it can develop into an impressive  mounding clump over time. Old specimens in their native habitat may be as much as 10 feet across or even more, with hundreds of heads. 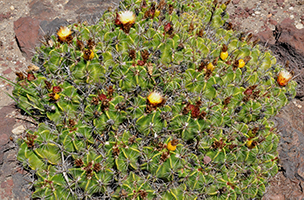 Like other types of barrel cactus, Ferocactus robustus has ribs, or ridges, running up its sides, with clusters of spines found at intervals along each rib. This species has 8 ribs, with the spine clusters far enough apart that they do not obscure the green of the plant itself. The spines vary in number, but they are divided into 2 types: the stouter spines toward the center of the cluster (appropriately called central spines), and the wispy spines around the outside (called radial spines). The central spines start out brown, turning gray as they age, while the radial spines are pale gray from the beginning.

Ferocactus robustus flowers from summer on through the fall months, but plants usually do not have many flowers open at one time. Flowering is not continuous, and there ar 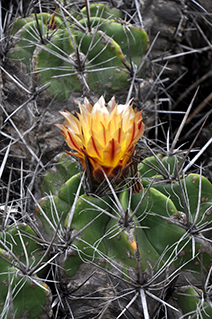 e often long intervals between bouts of flowering. At the Ruth Bancroft Garden, our first flowers typically emerge in June or early July, with the last blooms coming in November or even as late as early December. Each flower emerges from just above a spine cluster, and they are yellow, with a blush of red on the outermost petals. They are about an inch and a half in diameter (3-4 cm). The oval yellow fruits are about ¾ of an inch across (2 cm).

Coming from a restricted area in a part of Mexico that does not have cold winters, one might expect F. robustus to require a little pampering to succeed in cultivation, but it is actually not hard to grow and can stand freezing temperatures as long as these are not extreme or long-lasting. At the Ruth Bancroft Garden, our plants have done fine when the temperature has dropped overnight to the mid-twenties F (-4° C). Like most cacti, this species needs sharp drainage and a sunny position, though all-day sun is not necessary.