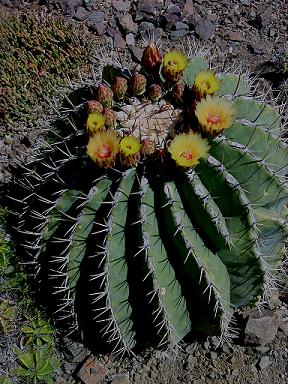 Plants in the genus Ferocactus are well-known for their stout, strong spines, and on some species these are so dense that it is difficult to even see the plant within.  By contrast, Ferocactus pottsii has comparatively few spines which are of modest length, so that the chubby plant body is in full view.  The ribs (the spine-bearing ridges which extend down the sides of the plant) are narrow at the top, with deep furrows between them, but they bulge with age to become more wide and rounded.  Plants are usually globular, though old specimens may become short-cylindric and up to 3 feet or so in height (1 m).

Ferocactus pottsii is a summer bloomer, usually coming into flower at 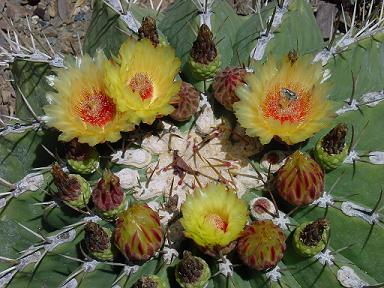 the Ruth Bancroft Garden in July and August.  As with other plants in the genus, the flowers are produced in a ring around the center.  They do not open all at once, but instead come a few at a time over a period of weeks.  The flowers are nearly an inch and a half across (35 mm), with yellow petals and a thick bundle of red filaments at the middle, each topped by a yellow pollen-bearing anther.

The long-lasting fruits of F. pottsii are light yellow and round, with the dried remains of the flower perched on top as a brown tuft.  They add a decorative touch to the plant for months after the flowering has finished.

Ferocactus pottsii is native to the mountainous region along the border between Sonora and Chihuahua states in northwestern Mexico, and southward into Sinaloa state.  It is cold-hardy enough that we do not have to give it winter protection at the Ruth Bancroft Garden.