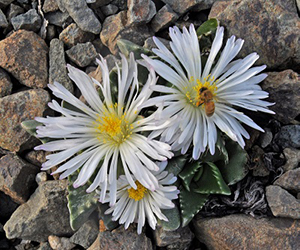 The Aizoaceae, or Ice Plant Family, is a large and diverse group mostly native to southern Africa. Like the Cactus Family, it contains a wealth of species with extreme adaptations for storing water and surviving in dry environments. Among the many genera sought out by collectors is Faucaria, popularly known as Tiger Jaws. This common name refers to the way the leaves emerge in pairs, with tiny but ferocious-looking teeth along the edges of their upper surfaces, suggestive of little open mouths ready to take a bite. Like most members of the family, these plants are small in stature, but they proliferate in time to make clumps. 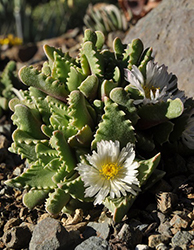 Almost all the plants in Faucaria have yellow flowers, with the one exception being the white-flowered Faucaria candida. Aside from the flower color, F. candida is very similar to the variable Faucaria felina, and recent taxonomic treatments tend to regard it as merely a white-flowered form of that species. However, the white flowers are distinctive, and the only name we have to refer specifically to such populations is Faucaria candida. It comes from near Cradock, South Africa, about 200 km north of Port Elizabeth.

The thick succulent leaves of F. candida are about an inch to an inch and a half long (2.5 – 3.8 cm), with a smooth triangular upper surface which has a crenulate edge and a little tooth atop each bump. Each head has as many as 8 leaves, with new pairs arising in the middle and mature ones at the outside, and the heads are crowded together in a clump. The plants are bright green in color, sometimes with white teeth (or even flushed pink at the tips). 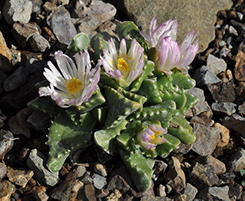 Like other plants in its genus, Faucaria candida is fall-flowering, with the flowers opening in the afternoon and closing at dusk. At the bud stage, or when not fully open, the flowers are often pink-tinged, but when fully open they are white. They are large and showy, about an inch and a half across or a little more (4 cm).

Although its native habitat is not in the winter-rainfall area, F. candida can be grown outdoors in our part of California provided it is given sharp drainage and occasional water during the summer months. It is often grown as a potted plant, and it also does well when treated this way.