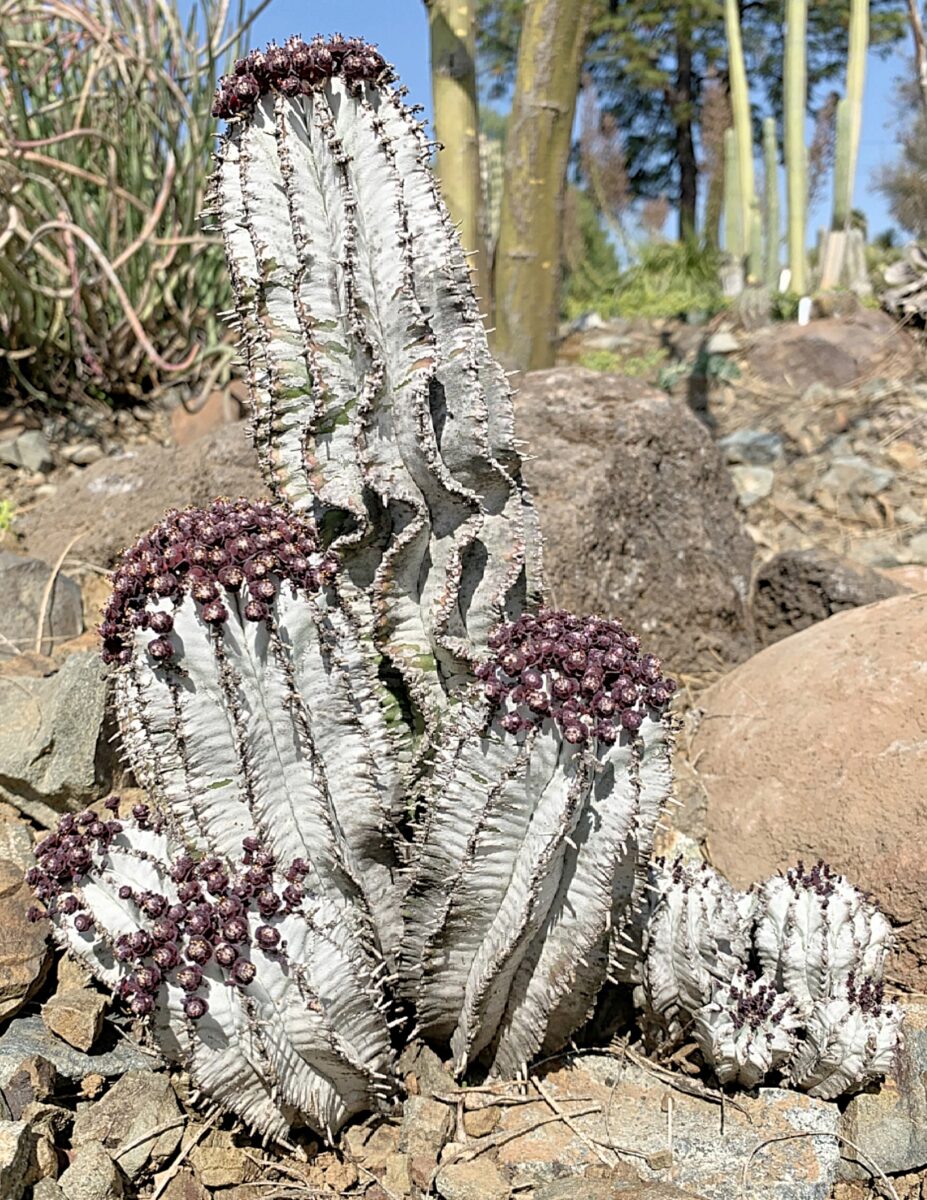 Euphorbia is a very large genus, including many succulents as well as many non-succulent plants, from tiny annuals to large trees. Among the succulent species, there are spineless ones and also many spiny ones that look a great deal like cactus plants. This resemblance is only superficial, since the Cactus Family (Cactaceae) and the Euphorbia Family (Euphorbiaceae) are not closely related. Interestingly, the spiny species in Euphorbia have achieved their protective armature in different ways. Some have a hard, horn-like plate, called a spine shield, adjacent to each eye (these are the points where leaves attach, if there are leaves, and from which the flowers or branches emerge). Such species usually have a pair of spines, one jutting out from each side of the spine shield. Others have spines of another sort, called peduncular spines, which are modified flower stalks. In these plants, the flowers are held atop a sturdy stalk, and after the flowers have gone by, the stalk hardens into a persistent spine. Sometimes there are sterile peduncles as well; in other words, the plant makes extra flower stalks that never actually have any flowers, but which add to the plant’s defenses.  While spiny Euphorbia species with spine shields are found in many parts of Africa, as well as Asia and Madagascar, those with peduncular spines are heavily concentrated in southern Africa. At the large end of the size scale among the peduncular-spined species is a group of plants that might be called the “polygona complex”. In contrast to some of their smaller-stemmed relatives, these typically branch from the base, but not higher up, forming a cluster of vertical columns. This group has long been classified as two species, Euphorbia polygona and Euphorbia horrida, with a number of varieties assigned to the latter. In general, E. horrida and its varieties included plants with glaucous stems, appearing whitewashed, as opposed to the green stems of E. polygona, which also occurred farther to the east. In addition, there was an easily observable floral difference. Euphorbia plants have a specialized flowering structure called a cyathium, which is like a cup ringed by five glands, with tiny stripped-down flowers (lacking petals or sepals) within. The glands in E. polygona were dark purple, while those in E. horrida were green (at least initially; sometimes showing a change of color with age).

When a new extra-white plant found its way into cultivation in the late 1980’s, it created something of a classification problem since it was so strikingly white (which seemed to align it with E. horrida), yet it had dark purple glands, like E. polygona. It acquired the cultivar name ‘Snowflake’, but some growers called it Euphorbia polygona ‘Snowflake’ while others preferred Euphorbia horrida ‘Snowflake’. A new monograph on the “polygona complex”, published by Detlef Schnabel in 2018, offers a resolution. Detlef’s solution is to put all of the varieties of E. horrida into an expanded concept of E. polygona (this being the older name, and thus having priority), with 12 varieties recognized to take in all the different variants found in the complex. One of these variants is the plant known as ‘Snowflake’, which now has an official varietal name: Euphorbia polygona var. nivea.

Euphorbia polygona var. nivea forms a cluster of columnar stems, each about 4 inches (10 cm) in diameter and up to 3 feet tall (90 cm). Each stem has about 15 vertical ridges running down its sides; such ridges are referred to as “angles” in Euphorbia. The angles may be straight, but often they are slightly wavy. There is a layer of powdery white wax coating the stems, and this layer may flake off on very old stems.

When E. polygona var. nivea comes into flower, it often has many flower-bearing cyathia (this is the plural of cyathium) crowded at the top of the stem, each with a short stout purple stalk, or peduncle. The peduncle bears small bracts of the same color, and on some plants there is a ring of large petal-like bracts cupping the cyathium. The five glands around the rim of the cyathium are again dark purple, looking like a ring of puffy purple cushions, and within these is a cottony substance out of which the little flowers emerge. The plants are dioecious, meaning that there are separate male plants and female plants, and the ones found in cultivation are male. This is probably because they are all vegetative propagations of one male individual. Once the flowers go by and the cyathium withers, the peduncles remain as stubby woody spines, but they are quite short and much less prominent than the peduncular spines of some other forms of Euphorbia polygona.

With its beautiful whitened stems and contrasting deep purple cyathia, E. polygona var. nivea is a striking plant whether grown in a pot or planted in the garden. It can endure dips down into the upper twenties Fahrenheit (to 25° F, or -4° C), as long as these freezing temperatures are only overnight and not sustained. In its habitat along the border between Eastern Cape Province and Western Cape Province, in the south-central part of South Africa, the rainfall averages about 14 inches a year (350 mm), and this is not concentrated in the winter months, as it is in California. Extra-good drainage is advised to avoid problems during our winter wet spells. 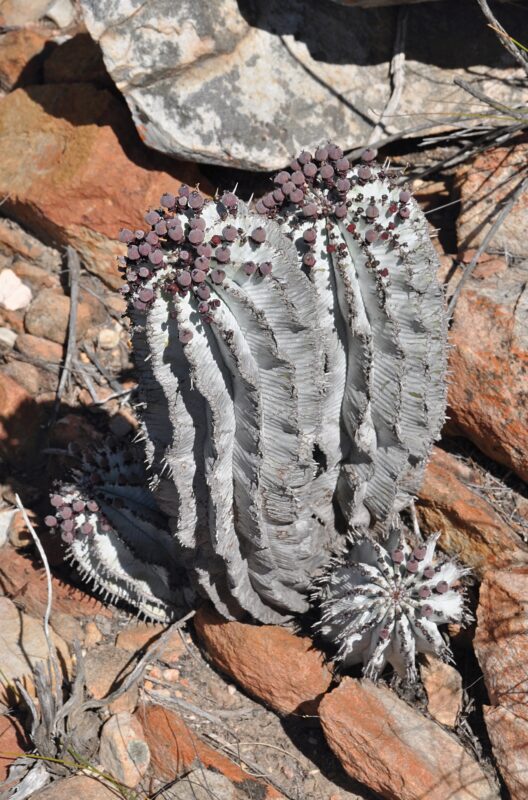 This photo is a plant in habitat near Joubertina, South Africa. 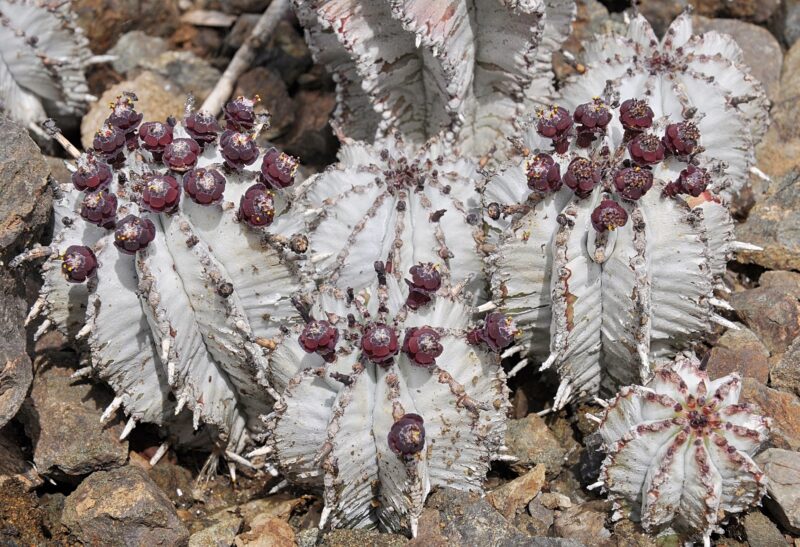 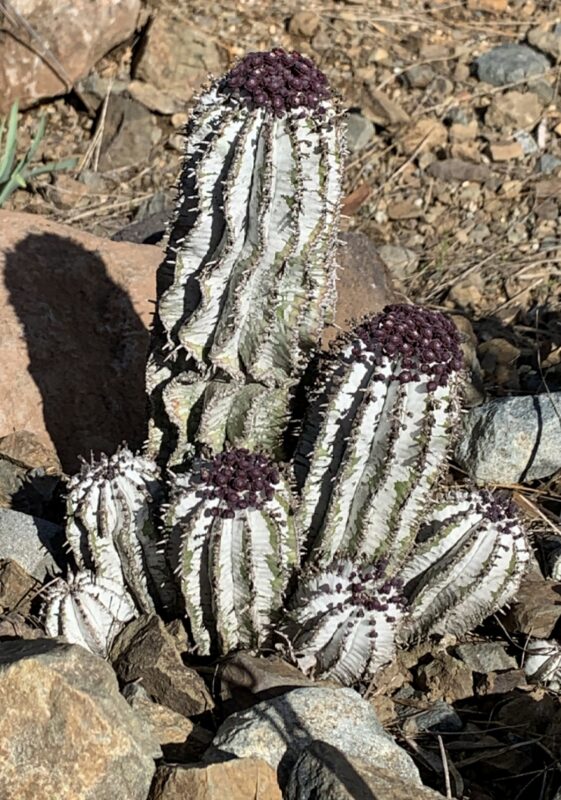 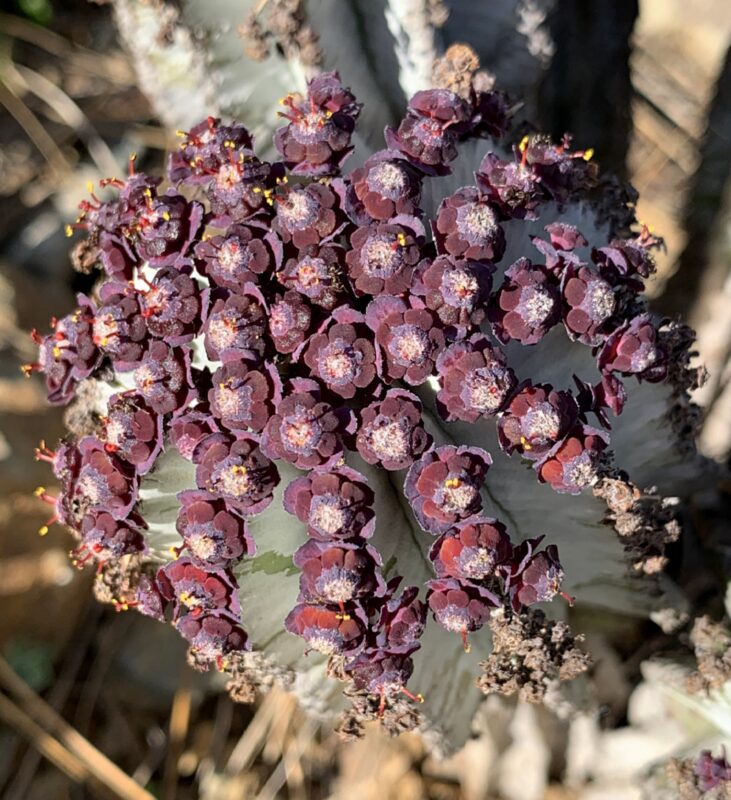