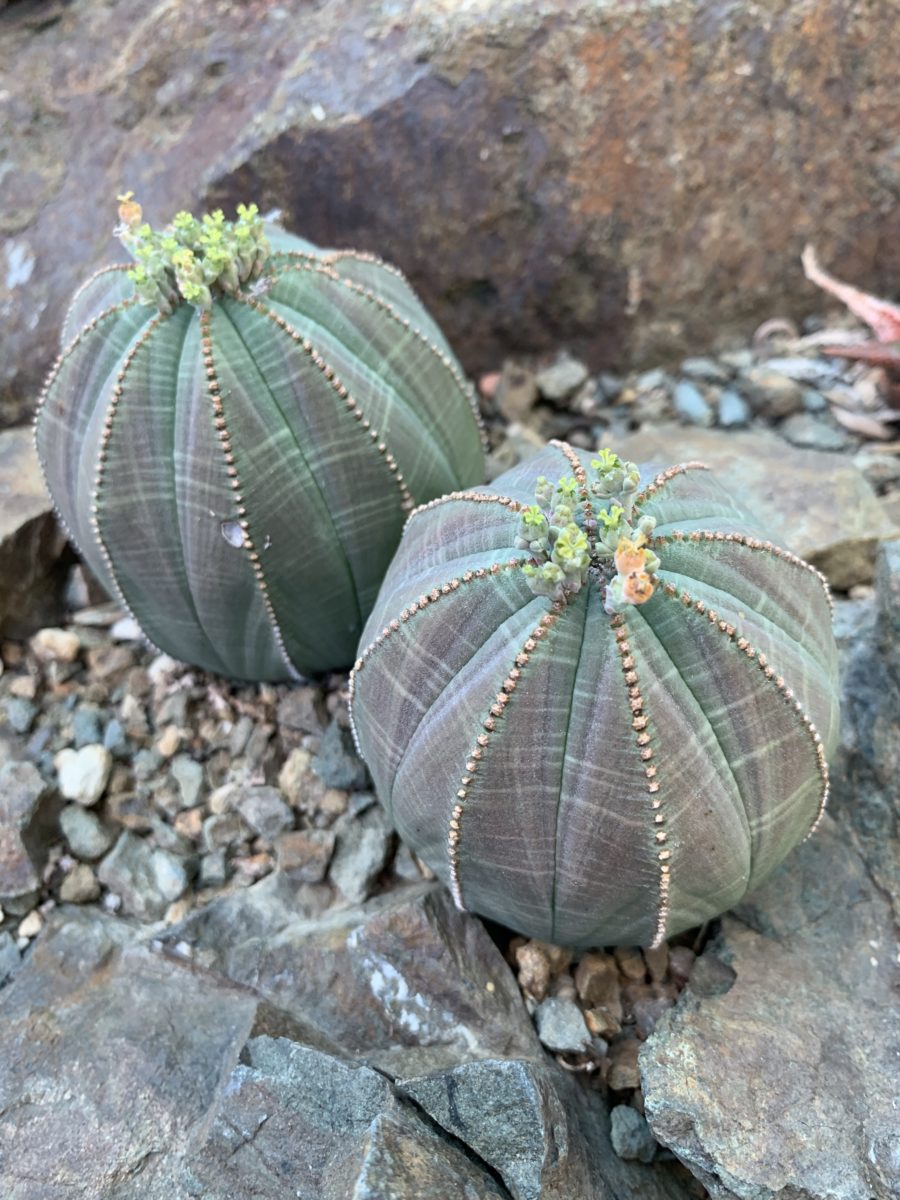 The genus Euphorbia is so diverse and widespread that nobody would suppose they all belonged together if the flowers did not demonstrate that they are related. They may be trees, inch-high weeds, or have a spiny cactus-like appearance. One of the true oddities in the genus is Euphorbia obesa, which bears the common name “baseball plant”.

Euphorbia obesa is native to South Africa, where it grows in the arid south-central part of the country. The average annual rainfall in its home is about 14 inches (350 mm), with a peak in late summer to early fall. Winters are dry, so growing it in a winter-rainfall area such as California requires extremely good drainage or some overhead protection to keep rain off. Frosts are not uncommon where this plant grows, but it cannot endure too many consecutive hours below freezing without risking injury.

The name “baseball plant” derives from the rounded body of the plant, with rows of little bumps extending up the sides, reminiscent of the stitching on a baseball. In a shady position, plants are green, but in strong light they are tinged with brown or purplish-brown. Narrow horizontal bands add to the plant’s unique appearance. Although the plants start out round, in time they become taller than wide, and old plants may be as much as 8 inches tall (20 cm). They often remain single, though older plants may sometimes add heads.

The flowering period for Euphorbia obesa is generally during the warmer part of the year, with the small flowers held on short stalks emerging from the top of the plant. As with other plants in its genus, E. obesa has unique cup-like structures called cyathia (singular – cyathium) which hold the flowers, with a row of glands projecting from the rim (typically five of them). In the case of E. obesa, there are separate male and female plants. In male plants, there are several tiny pollen-bearing flowers within the cyathia, while in female plants there is only one flower per cyathium. If successfully pollinated, the female flower enlarges into a round capsule up to .28 inches in diameter (7 mm), and at maturity this pops open and flings out the seeds. 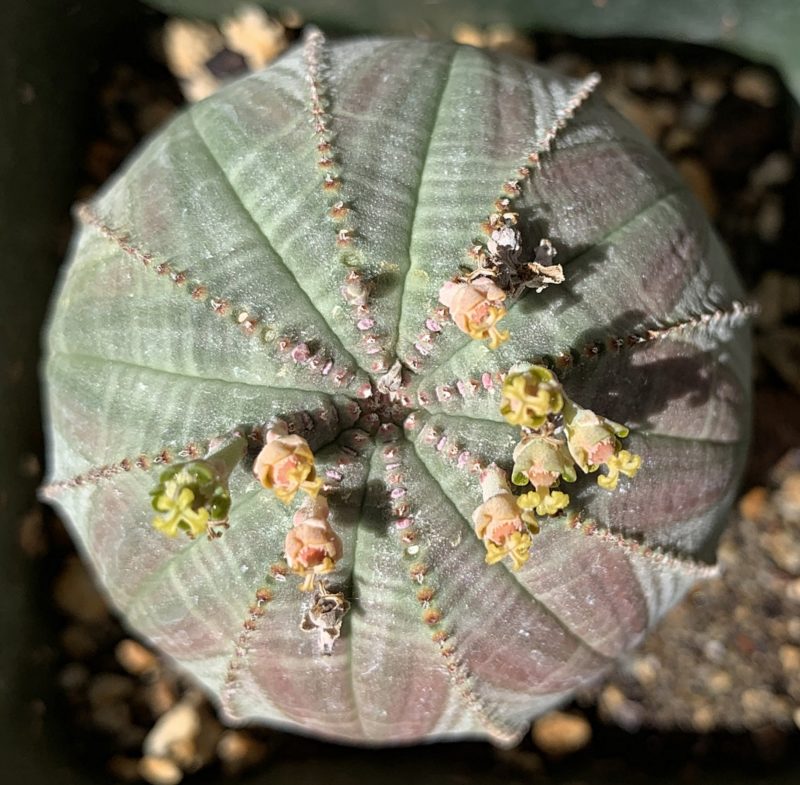 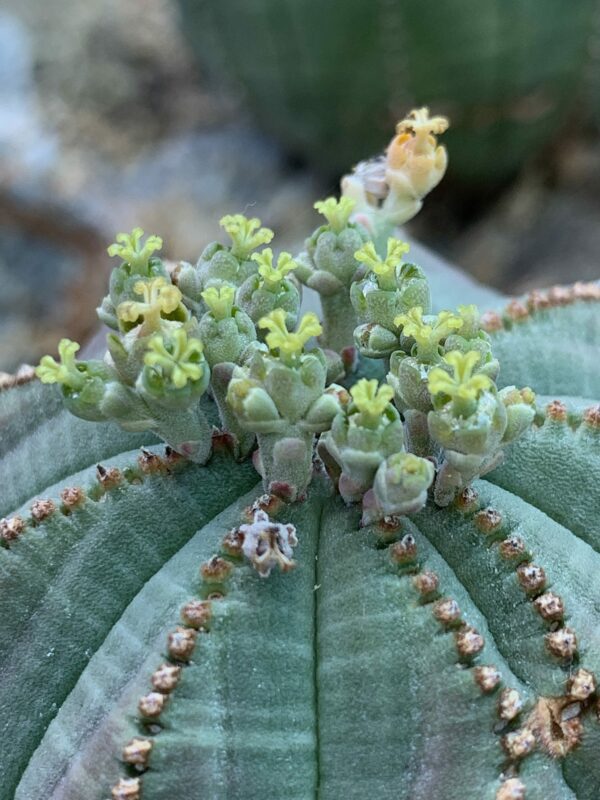 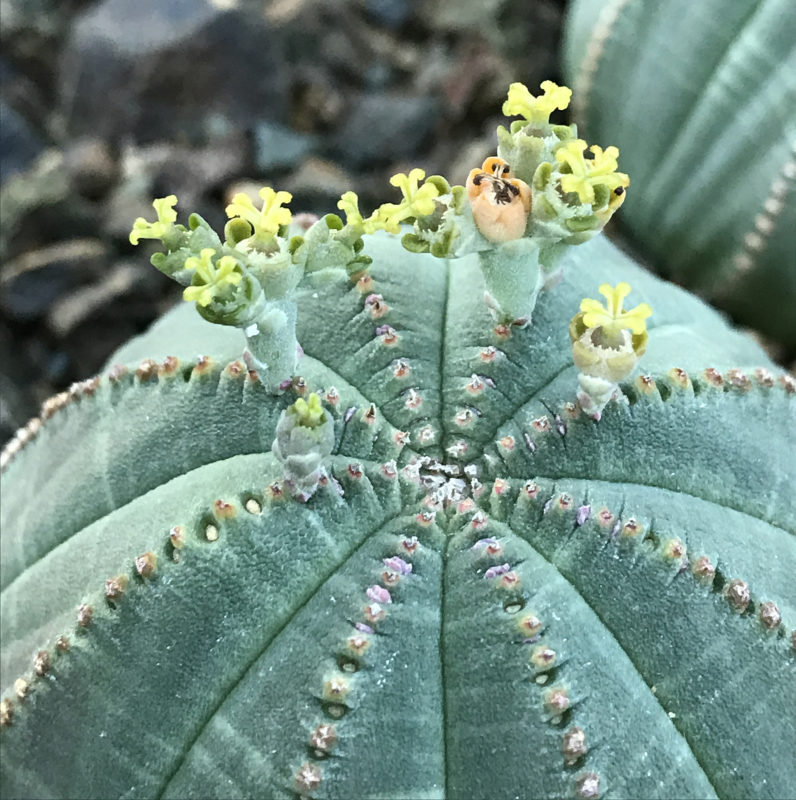